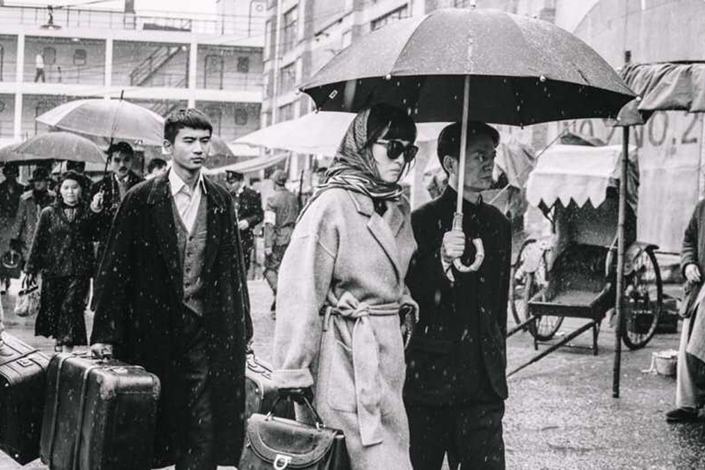 A scene from “Saturday Fiction.” Lead actress Gong Li plays an actress in Shanghai for a mysterious mission. Photo: TIFF

The 12 Chinese movies at September’s Toronto International Film Festival (TIFF) succeeded in making an impact despite lacking the marketing fanfare of their Hollywood counterparts.

Among the dozen films, three particularly stood out thanks to their gripping storylines, brilliant acting, and superb cinematography.

One of those was “The Wild Goose Lake,” a gangland thriller set in a backwater metropolis. The locations, including a sleazy hostel’s dark basement and a squalid open-air market, seem so real that the movie almost feels like a documentary. Director Diao Yinan, a master of suspense, used warts-and-all settings and smoldering emotions to connect with the audience. Toronto Star movie critic Peter Howell lauded the film as “an exercise in pure cinema, an abstract painting of a crime story.”

Meanwhile, Wang Xiaoshuai’s “So Long, My Son” follows the journey of two married factory workers devastated by the premature death of their only child. The film’s setting stretches from the Cultural Revolution, to China’s economic takeoff in the 1980s, and on through to today, charting how the couple process their emotional trauma while also going from being envied state-owned factory workers in an industrial city to underdogs in an obscure seaside town. Both lead actors respectively won the Silver Bears for Best Actor and Best Actress at the Berlinale in February for their true-to-life performances.

Then there’s “Saturday Fiction,” which pays tribute to the classic “Casablanca” with its tale of spies, lovers, friends and foes, set in Japanese-occupied Shanghai. As director Lou Ye said at TIFF, the countless shades offered by black and white fit the subtly changing wartime drama of Shanghai, where the east and west met. Gong Li’s lively and natural acting single-handedly elevates the movie to a fascinating high.

The coming of age of China’s so-called sixth-generation directors like Diao, Wang, and Lou shows how the country’s movie industry is increasingly churning out high-quality movies on a wide array of themes including ordinary folks’ day-to-day joys and disappointments.

That variety certainly seemed to please the festival’s attendees. “Chinese movies have a wide range of genres,” said Michael Lorimer, a retired math professor and self-proclaimed movie lover. “They are no longer just exotic (films) with different costumes and customs, set in rural or ancient China. They are no longer a synonym for Hong Kong martial arts stunts.”

Will Rance, a local college student who attended TIFF for the second time in 2019 and caught 15 screenings, echoed Lorimer’s sentiments. “It is a rare opportunity to watch so many great movies in such a short time,” he said. “The festival helps overcome the language barrier through images. It promotes understanding between people from different backgrounds (and) is also a great way to meet friends from all over the world.”

TIFF, launched in 1976 as the Toronto Film Festival of Festivals, collects and screens the best films from other film festivals.

While filmmakers at Berlin and Cannes compete for recognition from juries of experts, TIFF asks moviegoers themselves to vote for their favorite films. The festival has a reputation as something of a weathervane for the Oscars, as many winners of the festival’s People’s Choice award have either been nominated or won the Academy Award for Best Picture.

In TIFF’s inaugural year, 35,000 filmgoers watched 127 films from 30 countries. This year, those numbers have expanded to include 330 movies from over 80 countries and regions, which were screened to about 480,000 attendees.

Bill Marshal, the founder of TIFF and a visionary in the Canadian film industry, often praised the relevance of Chinese movies to today’s world. “The important thing about new Chinese cinema is that they stopped doing basic fables,” Marshall, who died in 2017, said back in September 2015. “They are doing new stories, new modern Chinese thoughts.”

By 2020, China’s box office — currently the second largest film market in the world — is expected to reach 200 billion yuan and exceed North America as the world’s largest market by revenue and audience numbers, according to a research report by Deloitte.

“A cinema is being built almost every other day across China. We know the hunger. Canada, like anyone else in the world — the U.S. and Europe, wants more Canadian films in China markets,” Alan Convery, director of government and foundations relations at TIFF, told Caixin.