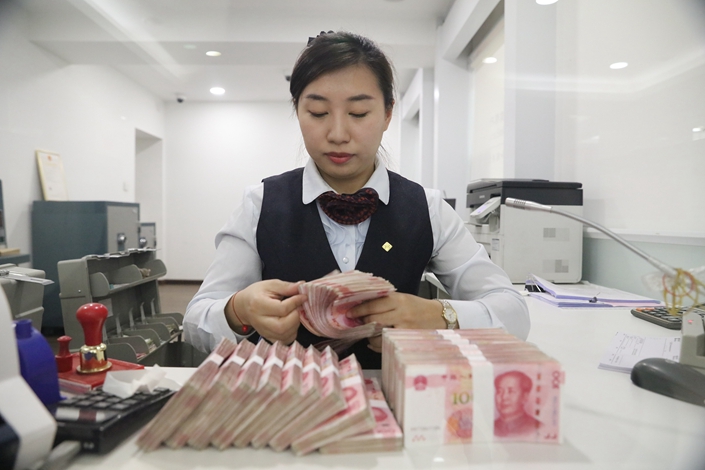 China’s shadow banking assets shrank to a nearly three-year low in the first half of 2019 amid a government crackdown on shadow banking, according to a global ratings firm Moody’s Investor Service.

Broad shadow banking assets, including entrusted loans, trust loans, banker acceptances, assets funded by wealth management products (WMPs) and loans from private finance firms, shrank by 1.7 trillion yuan ($238 billion) in the first half of 2019 to 59.6 trillion yuan, the lowest level since the end of 2016, Moody’s said in its latest quarterly report on China’s shadow banking.

The contraction was led primarily by the continued decline in WMPs and entrusted loans, said Michael Taylor, a Moody's managing director and the chief credit officer for Asia Pacific.

WMPs, investment products issued by banks, trusts, and securities firms that provide a higher yield than traditional bank deposits, were the focus of the regulatory crackdown that started in 2017, Taylor said. This shadow banking segment declined nearly 50% from its peak at the end of 2016.

WMPs, together with entrusted loans, in which cash-rich companies lend to other enterprises by using banks as middlemen, play a key role in supporting economic growth by providing finance to projects that would otherwise not qualify for traditional bank lending.

Since March 2017, China’s regulators have been stepping up efforts to reduce systemic risk in the financial system, including a series of measures to crack down on WMPs and curbing property sector financing by trust companies.

However, with a slower economy, regulators have started to tweak policies in recent months to boost growth. Moody’s pointed out that the crackdown on shadow banking has been eased selectively.

Even though trust loans at the end of June were roughly in line with the end of 2018, such new loans decreased by 133 billion yuan in July and August, mainly due to intensified regulatory scrutiny on property sector financing, Moody’s said.

Moody’s warned about the asset quality of the trust companies. As of the end of June, trust-backed projects with a default risk totaled 347 billion yuan, or 1.54% of the total, the highest since data was first recorded in 2014.

More trust funds are expected to be diverted to infrastructure investment in the future, especially as regulators tighten scrutiny of trust funds for property developers, Moody’s said in the report.

The slowdown in economic growth is weighing on the credit fundamentals of highly leveraged borrowers that rely heavily on shadow banking financing, so there is a risk that trust assets will continue to fall in 2020, Moody’s said.