Photo Essay: The Hardships of the Money Tree 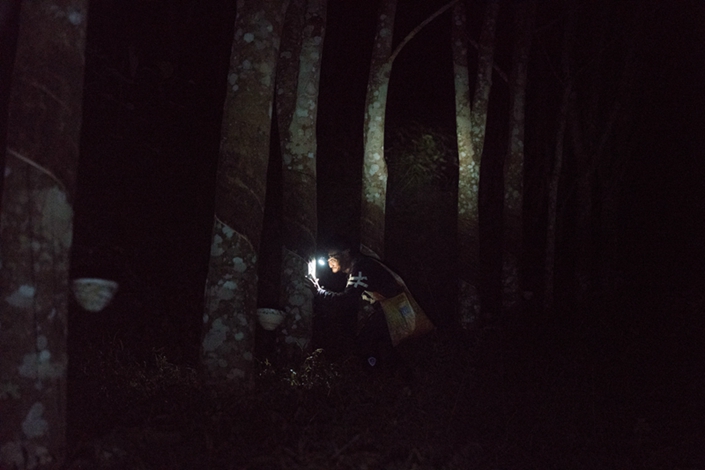 Aug. 5, 2019. Yan Ha bends to tap a rubber tree for sap at 5 a.m. In one day he plans to tap 700 trees, which will have him working from the early hours of the morning until midday. Photo: Caixin/Chen Liang

In Gongxin village, the locals say there are only three types of trees: rubber trees, eucalyptus trees and “miscellaneous trees.”

The village is in Menglian Dai, Lahu and Va autonomous county, close to China’s border with Myanmar in the southwestern province of Yunnan. The province is known for its vast rubber plantations and produces more than half of the country’s rubber.

Yan Ha’s dark face is thin, his waxy eyes are bloodshot, and he is rarely seen without a cigarette in his hand. In August, he sold his remaining rubber blocks and borrowed 120,000 yuan ($16,860) to buy 800 rubber trees. According to his calculations, a plantation of 2,000 trees needs four people to manage it. But for years, the rubber market has been slipping. Not even his son wanted to stay to help manage it. Now, only Yan and his wife are left.

Yan’s family has been managing rubber tree plantations for generations. Before 2004, rubber trees were treasures in the state-run rubber farm outside the mountains.

Between 1952 and 1957, China planted 1.2 million acres of Brazilian and Indian rubber trees in five provinces and regions in southern China, 330,000 acres of which were in Yunnan.

Usually, rubber trees begin producing sap, or latex, when they are six to eight years old and are cut down when they are 40 years old. As long as someone taps the trees, it can provide income for about 30 years, giving it the nickname of a “money tree.” But years ago, Yan neither had the technology to tap the trees nor money to buy saplings.

Then a group of businessmen from East China’s wealthy Jiangsu province came to Menglian to set up a rubber harvesting company. They signed management contracts with the local villagers in Gongxin, which meant that the villagers would manage the seedlings and collect the sap. The company paid fees according to the contract.

Yan became a worker on the rubber plantation. He learned how to manage a plantation and tap trees from the company. When the company announced in 2017 that it would be withdrawing from the region, it offered villagers with contracts a chance to buy the trees. On Aug. 3, Yan had finally saved enough to cover one-tenth of the down payment and bought 800 trees with a loan.

Hardships of the money tree

At 2:30 a.m., Yan emerges with a headlamp. If there were no birds singing or insects flying through the light on his head, the whole world would sink into darkness.

He walks quickly, racing the sun. It is best to tap the trees before dawn. He has too many trees. As he reaches the forest, his headlamp is like a firefly in the dark.

To tap the trees, Yan knocks a drainage plate into the tree and the sound of hitting the metal cuts through the silence. He must be careful in order to prolong the economic life of the trees, cutting into the sap at just the right depth. The milky white droplets of sap seep out and collect in the bucket.

Yan says that he can tap 700 trees by daybreak. After doing 300, he squats down for a cigarette break and says: “I’m old now, not as good at tapping. If the rubber prices were higher I could call my son and tell him to come back.”

Legal work at the border

According to the contracts, the sap drawn from the trees must be submitted in sufficient quality and in good time and purchased for about 33% of the market price. However, many farmers opted to sell the rubber privately at higher prices, which led the company to sue the farmers for contract violations.

In 2017, the company decided to withdraw, suspend operations, and “close the mountains for afforestation.” It hoped to sell the rubber trees off as soon as possible. After a couple of months, 30% of the villagers with contracts had agreed to buy the trees. But when the tapping season began in 2018, some decided to tap the trees without paying for them. The company reported them to the police.

After investigations, the company found that the villagers were reluctant to buy the trees because of a traditional unwillingness to go into debt, compounded by the low price of rubber. Nearby towns in Menglian have stopped rubber tapping operations due to the low price and because of a nasty 2008 incident where two rubber farmers died after clashes with police due to disputes between the farmers and the local branch of another rubber company.

The day he bought his trees, Yan returned home with the biggest debt of his life. Sitting on the front steps, he said he hoped the price of rubber would increase so that he can “tap rubber to make money, buy more pigs and chickens to raise, and pay off the debt soon.”