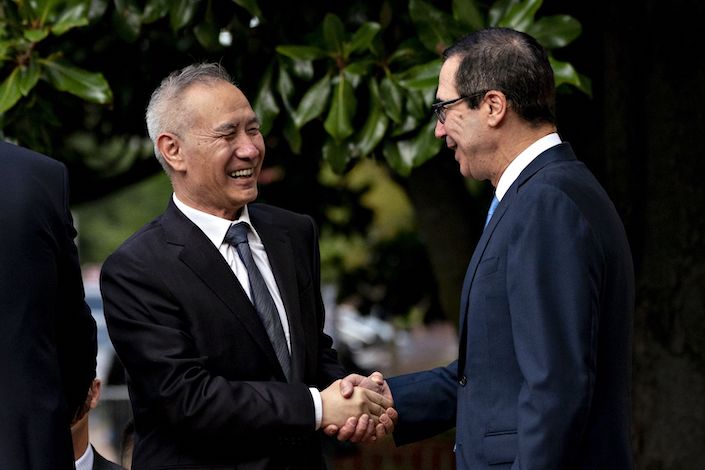 The U.S. and China made a major breakthrough toward ending their 18-month trade war by reaching a partial deal Friday after two days of negotiations in Washington.

Speaking in the Oval Office during a meeting with Chinese Vice Premier Liu He Friday afternoon, President Donald Trump said the negotiators reached “a very substantial phase one deal.”

Trump said the deal includes as much as $40 billion to $50 billion in Chinese purchases of agricultural products and a commitment to further open up China’s financial sector, according to a video on Bloomberg’s website of Trump speaking.

In exchange, the U.S. agreed not to proceed with an increase in tariffs to 30% from 25% on $250 billion of Chinese goods set to go into effect next Tuesday.

Trump said it will take three to five weeks to get the agreement written and he hoped to sign the deal when he meets President Xi Jinping at next month's APEC summit in Santiago, Chile.

Issues related to Huawei Technologies Co. weren’t part of Friday’s deal and will be a separate process, said U.S. Trade Representative Robert Lighthizer. The Chinese telecom giant is on a U.S. blacklist restricting American companies from doing business with it out of concerns about national security.

In addition, there was no immediate decision on whether to postpone or scrap a new 15% tariff on $160 billion of Chinese-made products – including popular smart phones and consumer electronics – that is due to take effect December 15.

U.S. business groups were cheered by the tentative trade deal.

Myron Brilliant, executive vice president and head of international affairs at the U.S. Chamber of Commerce, said he is optimistic that the move could pave the way toward a final deal with China.

Even before the president spoke, anticipation of a possible accord cheered Wall Street. The Dow Jones Industrial Average was up more than 480 points earlier in the day before closing up 320 points.

The two days of negotiations that wrapped up Friday were the first senior-level face-to-face talks since late July, after the two countries levied tit-for-tat tariff increases on hundreds of billions dollars of goods traded between them.

An optimistic atmosphere hovered over the talks, with Trump citing “warmer feelings than in recent past.” Beijing also made a positive gesture earlier Friday by setting a clear timetable for lifting limits on foreign control of domestic financial firms starting Jan. 1, 2020.

The White House hasn’t released an official statement on the talks. Instead, it posted a translated letter from Xi to Trump. In the letter, Xi said Chinese companies accelerated purchases of American agricultural products, including soybeans and pork.

While meeting with Trump at the White House on Oct. 11, Liu said that the two sides had “frank, efficient and constructive discussions on economic and trade issues of common concern” and “made substantive progress” in a number of areas, according to the state-owned Xinhua News Agency. Liu also said that the two sides had “discussed arrangements for follow-up consultations,” Xinhua reported.

However, the People’s Daily, the official newspaper of the ruling Communist Party, took a more cautious tone, warning that there remains a great uncertainty whether the two sides could reach a long-term resolution to their trade conflict. China defended its core interests in negotiations over the partial deal and would trade in its principles to end the trade dispute, it said.