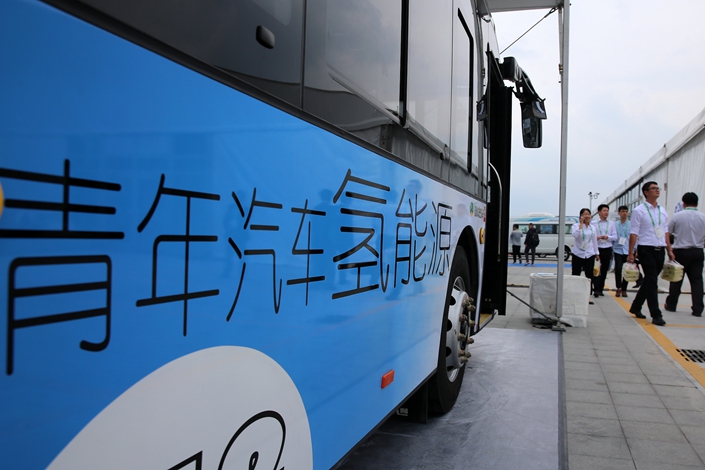 A hydrogen fuel cell vehicle on display at a conference in Nantong, Jiangsu province, on Sept. 26. Photo: VCG

China's Ministry of Finance has indicated it will scrap all subsidies for hydrogen fuel cell cars by the end of 2020 as planned, bringing their treatment into line with other types of new-energy vehicles (NEVs).

The ministry signaled the move in an official response (link in Chinese) issued late September to Chen Hong, chairman of SAIC Motor, in his capacity as a deputy to China’s top legislature.

The move will see carmakers miss out on handouts of around 200,000 yuan ($28,220) per passenger vehicle and up to 500,000 yuan for heavy commercial vehicles. Manufacturers also get subsidies from local governments.

Chen had asked the government to continue the subsidies at this year’s Two Sessions, the annual meetings of China’s top legislative and political advisory bodies.

The response from the ministry circulated online last week.

China has pledged to wind down subsidies for NEVs — a category that includes pure electric, hybrid electric, and hydrogen cars — by the end of 2020.

But unlike subsidies for electric vehicles and plug-in hybrids, which have been slashed in recent years, those for hydrogen fuel cell vehicles have not been cut yet. The market since has speculationed that hydrogen cars would be exempted from the subsidies phase-out of NEVs.

It is the first time that the ministry has clearly signaled it will not continue to subsidize hydrogen cars. It voiced concern in the statement that carmakers have become too reliant on government assistance.

“Long-running subsidies have made some auto companies reliant on government policies and they thus find it hard to compete in global markets,” said the ministry’s response. “The country’s (hydrogen) fuel cell car industry has not made breakthroughs and has not seen rapid development even with financial support.”

China’s overall NEV sales contracted for a third consecutive month in September after the country slashed subsidies on electric battery cars, which make up the lion’s share of them. Sales of NEVs dropped 34.2% in September, following a 15.8% decline in August, according to the China Association of Automobile Manufacturers.

Cai Tuanjie, a Transport Ministry official, said at an industry forum last month that the government should be cautious about how it promotes hydrogen cars, given the way over-investment gave rise to excess capacity in pure-electric vehicles.

Hydrogen cars, which are competitive in that they can run for longer and take less time to refuel than lithium-battery electric cars, were expected to be the government’s next focus after electric battery vehicles. Several government officials have suggested policymakers continue offering financial support to the vehicles.