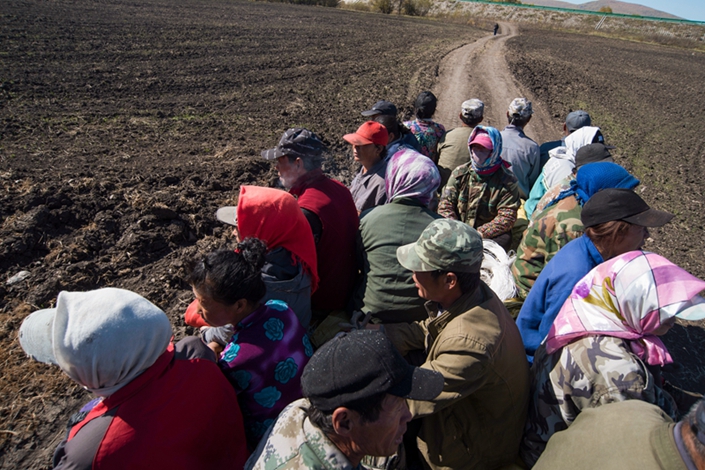 Sept. 22, 2019. After eating lunch, the laborers are transported on on a tractor to go through the potato fields and keep harvesting. In order to manage the cold temperatures and high-intensity work, they must work quickly. Photo: Caixin

At the end of August in Genhe city, in the far northeast of China’s Inner Mongolia autonomous region, as the leaves on the birch trees begin to turn yellow, 61-year-old Geng Pinfu looks at the land. He sees some potatoes have reached an awkward maturity, which he must dig out and put into storage.

Geng used to work in forestry, but after the local forestry bureau downsized, he began to grow potatoes for his livelihood. This year, his farm 55 kilometers (34 miles) away from Genhe planted more than 26.6 hectares of the Youjin 885 potato variety. Buyers are picky about the size and shape of the potatoes. Using machines for harvesting is not recommended, so Geng only uses machinery to turn the potatoes up before picking them by hand. The potatoes must be harvested before the cold weather arrives. He will need about one month and 25 people, whom he sources from neighboring Heilongjiang province, to help.

In Jiamusi city, 1,000 kilometers away, the corn and rice crops are not ready to be harvested until October. The laborers have nothing to do until then, so they find extra work. Geng provides them with a shelter next to the potato field, two meals per day, and 160 yuan ($22.6) per day for their work. “I have also done this work before, and know it isn’t easy. Now the cost of labor isn’t cheap, and I used to use local workers, but it was too unstable. Because their homes were so close, they would often leave for two or three days at a time,” Geng said.

On Sept. 1, the seasonal migrant laborers arrive in Genhe after a 10-hour train journey. In total, Geng found 27 people from Heilongjiang. More than half are women, and a handful are elderly. “The young and strong people, what do they see in this work? Too little money,” Geng says. The youngest is a 38-year-old mother of two. Her husband was injured and was unable to do much physical work, so she took advantage of the spare time before the harvest to make some extra money.

At another shed three kilometers from Geng’s, Yin Shihua has just arrived. As soon as she enters the tent, she sees almost 30 people, men and women, crammed into beds less than 1 meter wide. This is her first time traveling to labor. She is 48 this year. Because flooding ruined her wood ear mushroom crop, she was looking for other work when she stumbled upon the Geng’s advertisement looking for help harvesting potatoes. She thought she could do it for extra money. Her first night in the tent, she didn’t sleep well, and continued to feel uneasy for the next three days. Due to the rain they couldn’t start working and everyone was stuck in the tent. She worries about the work and misses home.

Finally the weather clears, and on the morning of Sept. 5 the fields are full of workers. The weather turns and the morning and nights are very cold, but the potatoes must be harvested before the ground freezes. They work 10-hour days, and after 20 days, four of the eight people Yin came with have left. Yin falls ill with colitis, and Geng sends her to the doctor in the town. Afterwards, she lays in bed to try to recover. She finds it difficult to walk for more than 10 meters, but she is determined to keep working.

Faced with the high-intensity work, 65-year-old Yang Fenglin grits his teeth and takes painkillers every day. “Back pain, leg pain,” he says. “I know that taking this stuff will be addictive, and not good, but if I don’t take it I can’t stand it.”

At the beginning of October, the birch trees’ leaves have fallen, the potato harvesting season has come to an end, and Genghe enters winter. After returning to their homes, exhausted but with their potato money, they begin to harvest corn and rice. When the birch tree leaves begin to turn yellow next year, the migration will occur again.