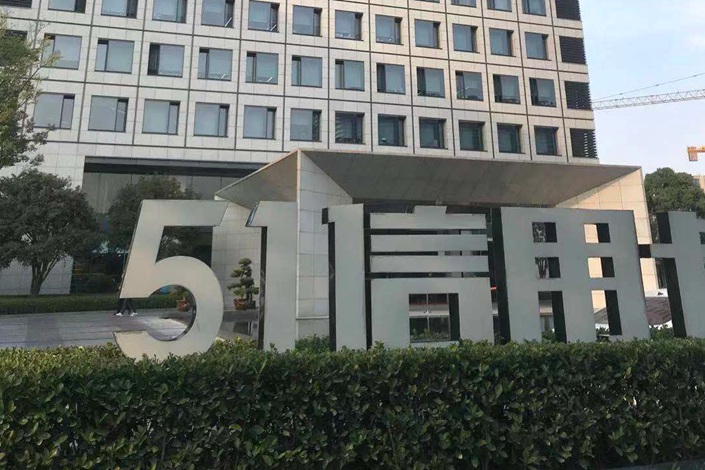 The headquarters of 51 Credit Card in Hangzhou. Photo: Hu Yue/Caixin

Police on Monday raided the Hangzhou office of Hong Kong-listed online credit card management platform 51 Credit Card Inc., in part of a wider clampdown on companies that illegally gather personal information online, a process known as illegal data scraping, and use it to facilitate debt collection.

Police in Zhejiang province capital said in a Monday post (link in Chinese) that they took action after receiving a large number of complaints about the company, including that its contracted debt collectors had pretended to work for the government.

Sun Haitao, 51 Credit Card CEO, issued an apology (link in Chinese) on Weibo on Tuesday morning, blaming poor management, including insufficient training and supervision of partnering companies, which he said led to “extreme behavior” that “harmed some borrowers.”

But it’s not the first time the company has been linked to personal data theft and other shady practices. In July, 51 Renpin, an online lending platform operated by the firm, was criticized by the Ministry of Industry and Information Technology for secretly collecting personal information.

Sun and 51 Credit Card Chief Financial Officer Zhao Ke assisted the investigation, the firm said in a Tuesday filing to the Hong Kong Stock Exchange. The company said the investigation that required assistance from the two had been “temporarily completed” and that neither man had been detained by authorities.

Shares of 51 Credit Card plunged nearly 35% on Monday morning, and the company halted trading of its shares in the afternoon. The company resumed trading on Tuesday afternoon, recovering almost 13% by close.

Founded in 2012, 51 Credit Card started as a credit card bill management app and later began extending credit to consumers. In its 2019 interim report, the company said its users are mainly young consumers with credit cards. “They are willing to use consumer finance products, and they have both strong consumption needs and abilities.”

Regulatory authorities in China’s other regions are also taking action. A local financial watchdog in Beijing has requested big data companies in the municipality check and report if their businesses involve illegal data scraping, Caixin has learned.