By Li Jiayu and Wu Gang 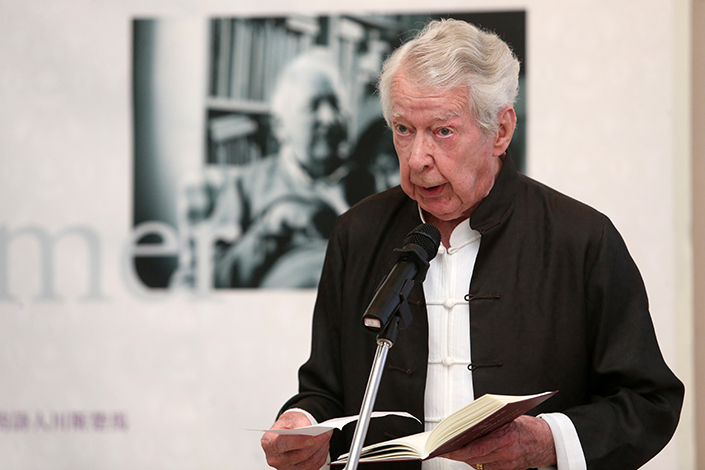 Famed Swedish Sinologist Göran Malmqvist, who had been remembered by many Chinese people as an avid promoter of Chinese literature, died Thursday. He was 95.

Malmqvist, who was elected to the Swedish Academy in 1985, was a linguist, literary historian and Sinologist.

Many Chinese became familiar with Malmqvist, known by his Chinese name Ma Yueran in 2012, after writer Mo Yan was awarded a Nobel Prize in Literature, the first time a Chinese citizen won the award.

Although Malmqvist told the media that he only met Mo three times before he won the Nobel, many believed Malmqvist’s position at the 18-member Swedish Academy, along with being the only Sinologist there who had translated numerous pieces of Chinese literature, greatly influenced the academy’s selection of a Chinese writer — though he was not on the five-member selection committee that year.

Malmqvist’s connection to China started in his early years at Stockholm University with the Swedish Sinologist Bernhard Karlgren. After that, Malmqvist studied in China from 1948 to 1950 — a time when the Communist Party defeated the Nationalist Party in a civil war and created the People’s Republic of China, which celebrated the 70th anniversary of its founding on Oct. 1.

After teaching Chinese at the University of London, he returned to China as a Swedish cultural attache from 1956 to 1958.

Malmqvist began translating Chinese in 1965 when he became a professor of Sinology at Stockholm University. In the following years, he translated dozens of pieces of Chinese literature, including the classics “Journey to the West,” “Tales from the Swamps” and many ancient poems and lyrics.

Malmqvist admired the late Chinese writer Shen Congwen, also known as Shen Tsung-wen. He translated Shen’s famous work, “Border Town,” into Swedish in 1987. He grieved when Shen died in 1988. Later, Malmqvist repeatedly expressed his belief that Shen could have won a Nobel Prize if he had lived longer. The prize is not awarded posthumously.

He also loved the current Chinese writers Mo Yan, Li Rui and Cao Naiqian. He was particularly impressed by their vivid descriptions of the countryside in northern China.

After Mo won the Nobel Prize in 2012, Malmqvist was quoted by the People’s Daily, the official newspaper of the Communist Party of China, as saying of Mo: “He is just himself, he never copies other people, and he only writes what he wants to write.”

Tao Duanfang, a columnist with the Beijing News, wrote over the weekend in an obituary that Malmqvist was not only a Sinologist or a just Mo Yan supporter, but served as a bridge between Chinese literature and the world.

“He lit a lamp, and let more people outside the country to see the face of Chinese literature,” Tao said.