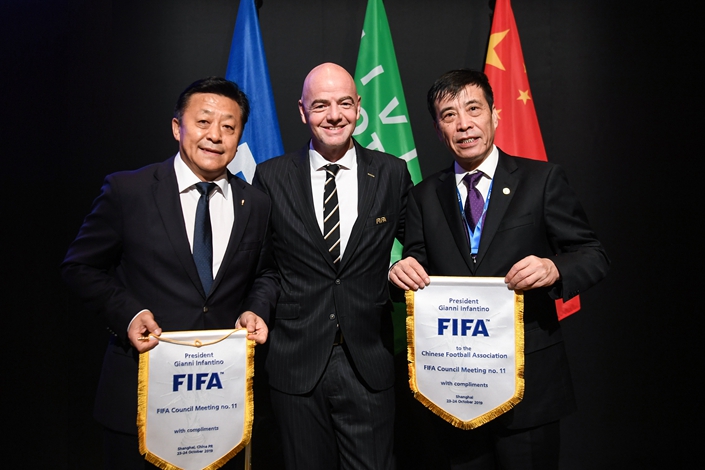 FIFA, world soccer’s governing body, on Thursday awarded China the right to host the first edition of an expanded club tournament that experts say could pave the way for the country to hold the World Cup in years to come.

China will stage a revamped version of the Club World Cup in the summer of 2021, which will see 24 teams, eight of which are expected to come from Europe, compete in an as-yet-unconfirmed format. That’s a significant departure from the current arrangement, which sees seven club teams from the six continental confederations compete in a straight knockout.

“The new FIFA World Cup for clubs will be a competition which every person who loves football looks forward to,” FIFA President Gianni Infantino said in announcing the decision. “It is the first real and true world cup for the best teams and clubs in the world.”

Chinese President Xi Jinping has made no secret of his dream to see his country host, and eventually win, the World Cup. While that latter goal remains somewhat remote — China currently ranks 74th out of 211 nations in FIFA’s world rankings, between Panama and the Cape Verde Islands — Thursday’s decision has edged a China-run World Cup closer to reality, experts told Caixin.

“In making this award, FIFA are testing whether China is in a position to hold the FIFA World Cup in either 2030 — which is less likely — or in 2034 or 2038, which is almost a guarantee,” Harry Spencer, co-founder of Shanghai-based sports agency First Pick Group, told Caixin in an email. “We know China is more than capable, as we saw with the Olympics in 2008 and will see again in 2023 when they host the continent-wide football tournament, the AFC Asian Cup.”

The decision to bring the Club World Cup to China may also help to revive the fortunes of a tournament that has historically failed to spark universal excitement, especially among big-name European soccer clubs for whom winning their confederation’s flagship competition, the UEFA Champions League, is arguably a greater achievement. Several top European sides said they would boycott the new Club World Cup when FIFA approved the 24-team format in March.

“Overall, it’s a shrewd move from FIFA. They’ve been trying to extend the Club World Cup for quite some time, but UEFA and the big European clubs have always been lukewarm about it,” said Cameron Wilson, founding editor of the influential Wild East Football website. “Now, the big, profit-driven European clubs will be tripping over themselves to be part of it. Playing in China gives them not only access to the Chinese market they covet so much, but also a way to play in meaningful competitive games there.”

A successful 2021 tournament could see China regularly stage the competition, Wilson added. “Basically, every party will be happy. FIFA get their expanded competition, the big European clubs get a chance to milk the Chinese cash cow, and the fans have some meaningful games to watch in a competition which has some kind of history and meaning — even if it’s not always taken 100% seriously in Europe.”

Certain human rights organizations condemned FIFA’s decision to hold the tournament in China, a country that frequently comes under fire for rights violations, especially against ethnic minorities in the far western province of Xinjiang, something the Chinese government has consistently denied. In a statement posted to the organization’s official website, Allan Hogarth, Amnesty International UK’s Head of Policy and Government Affairs, accused Beijing of trying to “‘sportswash’ its tarnished international reputation.”

However, Simon Chadwick, a professor of sports enterprise at the U.K.’s University of Salford who has extensively researched the relationships between sports and geopolitics in Asia, said such characterizations lack nuance. “For China, the Club World Cup is a way to use football to evolve its trade relationships, exert political influence, and build soft power,” Chadwick told Caixin in a phone interview. “While I don’t condone whatsoever any form of abuse, the term ‘sportswashing’ contains an unhelpful element of finger-pointing that ignores the fact that football can help to shine a more intense spotlight on a whole series of issues.”

FIFA introduced a human rights policy in 2017 designed to evaluate the suitability of event hosts. But at a press conference following a meeting of the FIFA Council in Shanghai on Thursday, Infantino did not directly address questions about China’s human rights record. “Countries all over the world are going through difficult times,” the Associated Press reported him as saying. “It is not the mission of FIFA to solve the problems of the world.”