China Working With Belgium, U.K. to Confirm Identities of 39 Found Dead in Truck

By Qing Ying and Ren Qiuyu 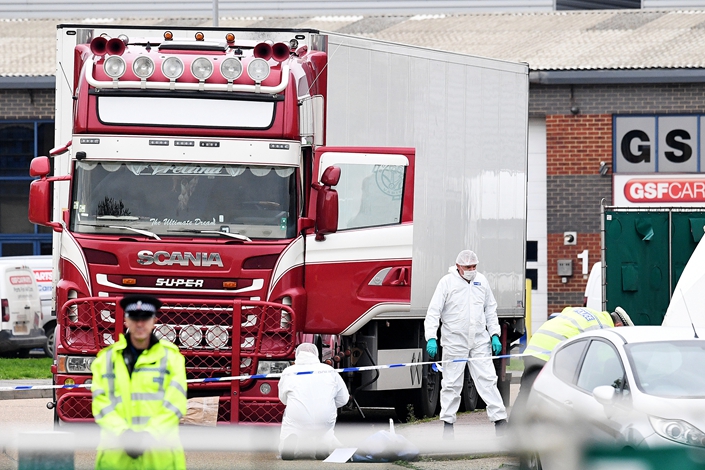 Police and forensic officers investigate a truck in which 39 bodies were discovered in the trailer, as they prepare move the vehicle from the site on Wednesday in Thurrock, England. Photo: VCG

Chinese officials in the U.K. and Belgium are working closely with their local counterparts to confirm whether the 39 dead discovered in a refrigeration container in southeast England are Chinese nationals, the Foreign Ministry confirmed on Friday.

The 39 bodies were discovered in the early hours of Wednesday local time, when paramedics were called to an industrial park in the town of Grays. The container had arrived at the nearby port of Purfleet the same night and was transported to the industrial park by a truck, the 25-year-old Northern Irish driver of which has been arrested on suspicion of murder.

On Thursday, Essex police said that the deceased were “believed to be Chinese nationals.” The Chinese Embassy in the U.K. clarified in a statement that the identities of the deceased “still cannot be confirmed,” but that the minister-counselor in charge of consular affairs had gone to Essex and met with local police.

“We read with heavy heart the reports about the death of 39 people in Essex, England. We are in close contact with the British police to seek clarification and confirmation of the relevant reports,” according to an embassy statement from Chinese Ambassador to the U.K. Liu Xiaoming on Twitter Thursday.

On Friday, Ambassador Liu tweeted that a member of embassy staff that had met with British police “urges (them) to find out the truth and (confirm) the nationalities of the victims as soon as possible.”

“No matter what country the victims are from, it is a great tragedy that attracts international attention to the issue of illegal immigration,” Foreign Ministry spokesperson Hua Chunying told reporters on Friday.

Essex police said in a statement that of the 39 people on the truck, 38 “are believed to be adults, and one is a young adult woman.” Eight of the deceased are women and 31 are men, the statement confirmed. The police also said that the first 11 victims had been transported to a nearby hospital for identification and post-mortem examinations.

Belgian authorities on Thursday confirmed that the container had passed through the Zeebrugge port and left on a ferry bound for the U.K. The Belgian prosecutor’s office said that it was unclear whether the victims had been loaded into the container before entering Belgium or within the country.

Joachim Coens, chairman and managing director of the port authority at Zeebrugge, said it was likely that the 39 victims were already in the container when it arrived at the port since all containers are checked upon entry and exit. Both checks found that the trailer was sealed.

Experts say that the temperature in the refrigerated truck could have reached as low as -25 degrees Celsius (-13 degrees Fahrenheit). No official cause of death has been announced yet.

Moreover, this would not be the first time that a number of Chinese nationals have been found being smuggled into the U.K. In 2000, 58 Chinese nationals were found dead at the port of Dover with two survivors. All 60 were from East China’s Fujian province.