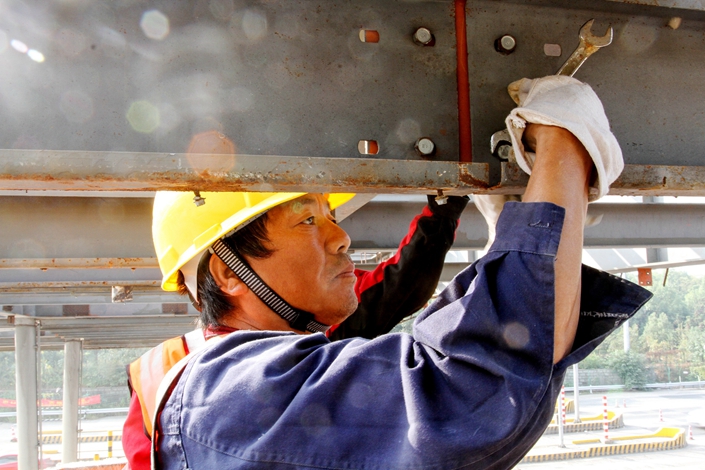 A worker dismantles the roof of a toll booth in Huzhou, East China's Zhejiang province, on Oct. 22. Photo: VCG

Now that the fourth plenary session of the 19th Central Committee of the Communist Party of China (CPC) is underway, the modernization of the governance system and governance capacity has become a hot topic of public opinion. Recently, the State Council issued regulations on optimizing the business environment. On the World Bank’s 2019 Ease of Doing Business Index, China was ranked 31st, 15 places higher than last year. This good news is an affirmation of China’s achievements in administrative reform over many years and is proof of China’s continuous progress in national governance. The fourth plenum will make decisions on several major issues concerning the modernization of the national governance system and capacity. We deeply hope when implementing the spirit of the plenary session that policymakers will pay great attention to the peoples’ personal experiences of national governance.

Recently, there have been many reports of local governments’ disorderly actions, provoking market complaints and have caused people to suffer. In many places, improper administrative measures have been taken to ban and restrict the raising of pigs. In some places, “one-size-fits-all” demolitions have occurred. In some rural places, it is now forbidden to wear mourning clothes at funerals; other places have banned commercial card games and mahjong halls. The seriousness of these cases is different, but what they have in common is engaging in various “optional actions” under the guise of following central documents. These policies are issued at will, and common sense leads us to see many irregularities. It is hard to believe that they have been carefully discussed, let alone strictly reviewed for legitimacy. These arbitrary rules come out, provoke a big stir and often end in embarrassment. This kind of “policy recall” is quite different from recalling products. Product recall sometimes can enhance a product’s reputation. However, policy recall inevitably damages the public’s trust of the government. The adverse consequences it brings are likely to be irreparable, which is extremely sad.

Since the third plenum of the 18th Central Committee of the CPC, the Central Committee has repeatedly ordered the government to minimize improper intervention in market activities, which is also the common expectation of all sectors of society. It is an urgent task to run it through grassroots governance. It is also necessary to reflect on why it is difficult, where the difficulties occur, and how to solve it.

First of all, we must control the restless hands in grassroots governance through institutional mechanisms. The impulsive of power may stem from one’s own self-interest, from pressure from superiors, or from the lack of basic understanding of the market economy. The central government has roughly clarified the boundary between the market and the government, and strict compliance with implementation should be a compulsory course for grassroots governance in the future. To give the market its decisive role, we must not stop talking. To control the hands of power, officials’ awareness of right and wrong is necessary, but we must not rely on this. It must be dependent on the system and on the rule of law. At the same time, control is not imprisonment. The services and regulatory responsibilities that the government should provide should not be discounted.

Secondly, we should further strengthen accountability, so that damage to the business environment should result in punishment. In the past, the general attention to this issue was lacking and the punishment was obviously weak. In recent years, with the importance of the business environment highlighted, the punishment of governments at all levels and of their staff is increasingly emphasized. Many documents directly stipulate “forbidden” issues and clearly define which government behaviors will be punished. However, we need details on how to process and how to punish them. Many documents also give enterprises the right to refuse improper government intervention, but in practice, how can enterprises refuse? What reliable channels do they have? Many top-level plans have not been implemented in detail. This can easily lead to seemingly severe punishment, and in the end just become propaganda slogans.

Finally, external supervision — especially that of the media and social organizations — should be encouraged and supported. Grassroots governance involves all aspects of contemporary social and economic life, which cannot be completely included in top-down administrative regulations. The vast majority of policies that cause public outrage depend on media disclosure to be noticed and media supervision to be corrected. When top-down governance fails to catch up, social supervision plays an indispensable role. Therefore, governments at all levels should take an encouraging and tolerant attitude toward external supervision, especially to realize that the media are not “alien forces” or chaotic elements, but are actually there to help.

After the closing session of the fourth plenum this week, governments at all levels will certainly make efforts to learn from the spirit of the session. We hope that learning will not only be reported to the central government and higher authorities, but will also be shown to the public. After all, the feelings of the people are the most reliable yardstick to measure national governance. The satisfaction of the people is the starting point and foothold of the modernization of the national governance system and governance capacity.