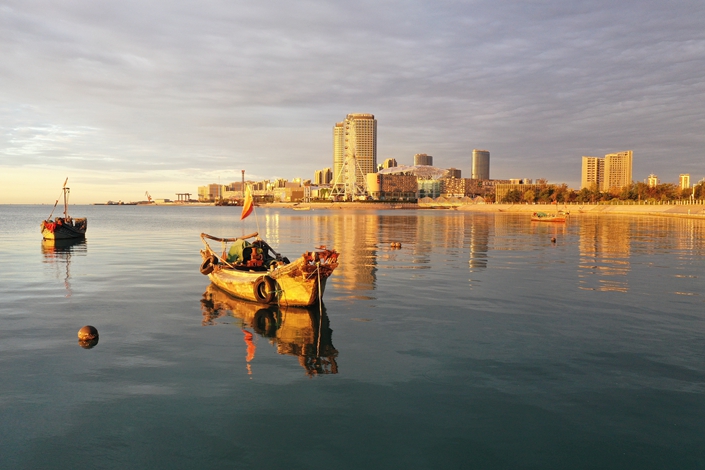 Sea-level rises associated with greenhouse gas emissions from human activity could affect 93 million people on the Chinese mainland by 2050 — three times more than previously thought —according to a new study.

The projections carry profound implications for highly urbanized coastal areas like Shanghai, Tianjin, and the Pearl River Delta, where Hong Kong is located. By midcentury, land currently home to 93 million people in China could be lower than the height of the local average annual coastal flood, according to a study published in the British peer-reviewed journal Nature Communications.

Virtually the entire center of Shanghai, which by some estimates is the country’s most populous city, would be vulnerable to inundation by ocean flooding without the construction of new coastal defenses. The same goes for vast swaths of the eastern province of Jiangsu.

The picture looks similarly bleak for the northern Chinese municipality of Tianjin, which serves as the main seaport for Beijing, and for much of the Pearl River Delta region, a densely populated cluster of industrial cities that includes Hong Kong, Macau, and Guangzhou.

Researchers at the New Jersey-based organization Climate Central used machine learning to generate more accurate data on global land elevation than was previously available. They did not factor in future population changes or land lost to coastal erosion.

The scientists concluded that coastal elevations are “significantly lower than previously understood across wide areas,” raising the likelihood that rising seas could encroach farther than originally expected, according to an accompanying summary of the findings. Previous research estimated that approximately 29 million people in China would be affected by sea level rises by 2050.

Overall, researchers concluded that within three decades rising sea levels could “push chronic floods higher than land currently home to 300 million people” worldwide, and that areas now home to 200 million people “could fall permanently below the high tide line” by 2100. Coastal Asian regions are at the highest risk of inundation, with potentially “profound economic and political consequences within the lifetimes of people alive today,” researchers said.

When asked for his take on the significance of the study, Cheng Lijing, an associate professor at a climate- and environment-focused arm of the Chinese Academy of Sciences, told Caixin by email that he harbored doubts about the application of U.S.-generated data parameters to the Asian coastline. But he recognized that rising sea levels will have severe impacts on human and ecological systems.

Coastal China is already seeing gradual rises in sea levels, Cheng added. “Things like rising sea levels, typhoons and storm surges, and extremely high waves and water levels are gradually increasing, and in some cases their impacts overlap,” he told Caixin. “They have clear multiplying effects on flooding in coastal regions.”

However, submerged cities are by no means inevitable. Millions of people globally already live in places below the high tide line, but are protected by seawalls, levees, and other infrastructure. China is already working on adaptive solutions to sea level rises, including early-warning disaster systems, seawalls and other forms of protective infrastructure.

Patrick Verkooijen, CEO, the Global Center on Adaptation, said the low-lying megacity of Shanghai is “in population terms, the world's most at risk from rising waters.”

“If nothing is done, water related problems will affect millions of people and cause billions of dollars of damage.”

Verkooijen pointed to “sponge cities” like Lingang in Shanghai as possible solutions. “With its green infrastructure of trees and plant beds, permeable pavements and roof-top gardens the city can soak up heavy rain, divert water and avert floods. With collaboration like this, knowledge grows and spreads and is in turn passed on so other countries and other regions can use it to help them adapt to their own climate problems.”

Nonetheless, recent articles like last month’s IPCC special report on the oceans — which concludes that melting ice sheets are accelerating global sea level rises — underscore the importance of adaptation, according to Cheng. “Dealing with the risks of rising seas remains an issue that demands a high degree of attention,” he said.