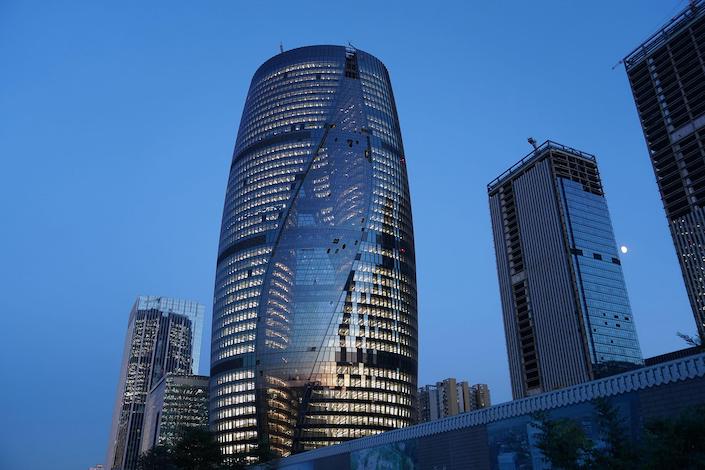 One of the transactions, involving two office towers in Beijing and one in Shanghai, is close to the final stage. The buyers are American private equity firm Blackstone Group Inc. and Singapore sovereign wealth fund GIC Private Ltd.

In addition to the three office towers, Soho China also plans to sell five other commercial buildings in Beijing and Shanghai within two years, with a total value of 50 billion to 60 billion yuan ($7.1 million to $8.5 billion), the people said. Soho China didn’t respond to Caixin’s request for comment.

China’s office market is cooling this year as economic growth slows. The office vacancy rate in Shanghai amounted to 20% in the third quarter, according to data from property consultancy DTZ. The current return on investment for office buildings is far from developers’ ideal goal, the head of a market research firm told Caixin.

Soho China’s Hong Kong-listed stock closed up a record 18% Wednesday on the strategy news after a nearly 30% decline from its high in February.

The eight office properties are Soho China’s core assets. The company held a total of 61.1 billion yuan of investment properties, according to its first-half financial report. The sale of these properties would liquidate the company’s mainland assets.

The sales would represent an abrupt turn from the company’s previous strategy. When Soho China in January launched the Leeza Soho tower, a mixed-use project in southwest Beijing, Chairman Pan Shiyi told Caixin the company planned to retain complete ownership of the tower. At a promotion event in June, Pan confirmed that there was no plan to sell any of Soho’s eight properties.

The company has already started offloading some noncore real estate assets. In June, it announced plans to sell individual floors in properties it holds for a combined 7.8 billion yuan. It recently also sold parking spaces under nine of its buildings and its shared office space brand Soho 3Q.