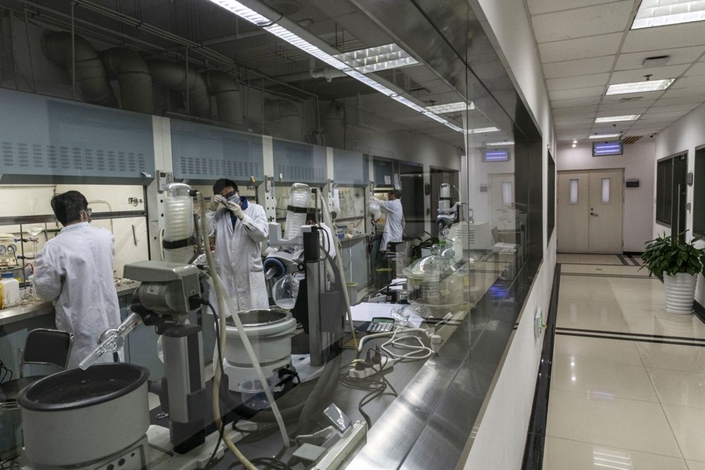 Researchers work inside a laboratory at BeiGene's research and development center in Beijing. Photo: Bloomberg

(Bloomberg) — Amgen Inc. will take a 20.5% stake in Chinese-American drug developer BeiGene Ltd. under a deal to develop and commercialize about two dozen of Amgen’s on-market and experimental cancer drugs in China.Amgen will buy about $2.7 billion worth of Beijing and Cambridge, Massachusetts-based BeiGene’s shares. It has agreed to pay $174.85 per American depositary receipt (ADR), a 26% premium to where the U.S.-traded shares closed Wednesday. It will also take a seat on BeiGene’s board.

BeiGene’s shares rose 32%, the most on record, in Hong Kong on Friday. The ADRs rose 27% in post-market trading in New York on Thursday, while Amgen was little changed.

Under the agreement, BeiGene will take over Chinese commercialization of three drugs used to treat cancer and its effects: Xgeva, which is already on the market in China, and Kyprolis and Blincyto, which are near approval. The companies will equally split any profit or loss.

“We’ve been working to expand our strategy geographically over the last four or five years,” Murdo Gordon, Amgen executive vice president of global commercial operations, said in a telephone interview. “We’re largely complete in that, and this is really the missing piece of the puzzle.”

BeiGene will also work to develop and commercialize 20 of Amgen’s experimental oncology drugs. BeiGene will put in $1.25 billion for that effort, and Thousand Oaks, California-based Amgen will help fund development and pay royalties on the products if Amgen sells them outside of China.

“The deal will expand BeiGene’s oncology portfolio and further build its presence in China, while the proceeds will extend BeiGene’s cash runway beyond 2020,” said Cinney Zhang, an analyst with Bloomberg Intelligence, in a Nov. 1 note.

China’s pharmaceutical market has transformed under the government’s efforts to bring in more new, brand-name medicines. As the government has agreed to approve and pay for new treatments, drugmakers have shifted their focus from selling older pills that have lost patent protection in Western markets and are increasingly working on developing and commercializing newer products in China. Cancer drugs have been a particular focus, both for domestic Chinese companies and multinational drugmakers anxious to tap the massive market.

“This deal wouldn’t have happened if it wasn’t for these regulatory reforms in China that have led to a boom in the domestic biotech space,” said BeiGene’s China President Wu Xiaobin.

BeiGene already has a large footprint in China, Chief Executive Officer John Oyler said in a phone interview. Out of its about 3,000 total workers, 2,300 are in China, with 700 in sales and another 600 in clinical development.

Oyler said the company has been expanding its sales and research operations in China for years in anticipation that the market would grow and become more inviting of new drugs. “We realized that was going to happen, and we built out these deep capabilities in front of it,” Oyler said.

Amgen’s investment is also “a strong vote of confidence against the short selling” that hurt BeiGene’s shares in September, according to Wu. J. Capital Research called BeiGene “poorly managed” in a report early that month. The company rebutted the report, saying it had “numerous inaccurate, unfounded and misleading allegations.”