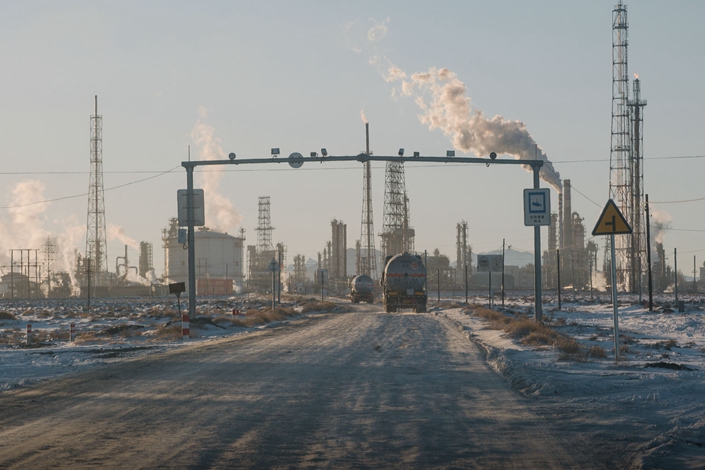 (Sixth Tone) — Sometimes, after he finishes his shift at the refinery, Du Yiming takes a walk through the ruined oil town where he grew up. He wanders past his family’s now-abandoned apartment on a street littered with vacant lots, around the former hospital overgrown with junk, and on through the silent suburbs, where the wind whistles in from the Gobi Desert and peels pastel-colored paint off the housing blocks.

Memories loom large in Yumen, a proud town that fostered not only three generations of Du’s family, but also the soul of socialist China. Home to the country’s oldest oil well, Yumen boomed after the Communist takeover in 1949. Even after extraction peaked a decade later, the town remained an industrial powerhouse and a feted example of the supposed superiority of Chinese socialism, with the government lauding its oil workers and commissioning art, films, and poetry inspired by the Yumen “Iron Spirit.” Elderly residents boast that for a while, life here was as comfortable as it was in Shanghai.

Few would make that claim now. Decades of declining yields and the development of other oil fields made China less reliant on Yumen, whose fortunes slid further after sweeping economic reforms in the 1980s and ’90s dismantled the planned economy, restructured unprofitable state-owned energy companies, and forced the town to compete in a market where more money could be made elsewhere, prompting thousands of residents to leave.

China has wrestled with the demise of single-resource cities like Yumen for years. In 2013, the State Council — the country’s Cabinet — published an official list of 262 ailing “resource-based cities” as part of a plan to transform their economies, ensure sustainable development, and help them catch up with rapid nationwide growth by 2020. Many are towns in China’s Rust Belt that have fallen on hard times: exhausted northeastern coal pits, forest-swathed frontier towns that no longer permit logging, copper mines whose seams have run dry. Compared with more developed cities in the east and south, these places suffer from higher rates of poverty, joblessness, and population decline.

Yumen also appears on that list, even though the city has been audaciously attempting to reverse its fortunes for nearly two decades. Instead of trying to pump new life into the oil industry, the local government built a brand-new city some 80 kilometers (49 miles) away from the original town, integrated it into a burgeoning regional wind-energy sector, and relocated most of the oil town’s remaining residents. Yumen was lauded for trading a finite energy source for one that will never run out, thus securing the town’s economic future and burnishing China’s green credentials in the process.

However, the reality of Yumen’s transformation is more complex. The revitalization project has essentially created two distinct cities, separated not only by geography, but also by history, wealth, and values.

Old Yumen, as we’ll call the oil town, feels frozen in time — and not just because its idle pumpjacks, hissing heat pipes, and evening public-radio broadcasts evoke a socialist China of decades past. Its remaining oil workers often hark back to the town’s golden age, expressing deep working-class pride in devoting their lives to national industry and respect for the town’s unique spirit. But they despair at the town’s dwindling operations, the waning prestige of oil jobs, and the mind-numbing drudgery of laboring in an increasingly automated sector.

Meanwhile, the 167,000 residents of New Yumen — our shorthand for the new boomtown — relish its cosmopolitanism, chase individual fulfillment, and refuse to feel bound to their work or homes. Many of them are college-educated, middle-class young migrants who work high-skilled jobs by day and frequent restaurants, karaoke bars, and craft beer pubs by night. Few of them know much about the oil town, and fewer still know anyone who lives or works there. When asked about Old Yumen, many describe it as, at best, an irrelevance — a throwback to a bygone era. At worst, they dismissively ask: “Isn’t that just a ghost town?”

Oil families like Du’s, who have struggled to come to terms with Old Yumen’s fading glory, might once have responded to such questions with indignance. Now they just react with resignation. Standing at the top of Liberation Street, the town’s main thoroughfare, Du nods his head toward his boarded-up former apartment. “This was my home for years, and now it’s a shadow of its former self,” he says. “There’s a sense of loss, like watching autumn turn to winter.”

In the space of a few generations, Yumen’s oil families have gone from being some of the country’s most privileged workers to some of its most downtrodden.

Take Du, for example. The 46-year-old’s maternal grandfather was one of those sent by the early Communist government to go out into the bleak landscape and help build Old Yumen. Although he eventually returned to his nearby rural home village, Du’s father settled in the oil town, making Du part of the “yousandai,” the third generation of his family to work in oil.

If Du can help it, his generation will be the last. “I’m just sick to death of it all,” he says.

That’s partly because China’s oil jobs aren’t what they used to be. When Du’s father, who is in his 70s and retired, worked as a prospector for the local geological survey office, his job was to scour the unforgiving landscape in search of untapped oil seams. The work was hard, but he had the satisfaction of returning to a strong family and a thriving, prestigious community. It was the early days of Communist rule, and amid a nationwide drive to industrialize, the state trumpeted what it called Yumen’s “Iron Spirit,” a supposedly unique but vaguely defined combination of doggedness, self-sacrifice, and patriotism.

Being associated with the Iron Spirit allowed families like Du’s to live, if not in comfort, then at least in comparative privilege compared with most other Chinese people at the time. Du has particularly fond memories of the Lunar New Year, when the whole town would gather to celebrate. “We’d hold lion and dragon dances,” he recalls, gesturing toward Liberation Street. “This road was full of people.”

But the boom years didn’t last. In 1959, when Old Yumen supplied more than half of China’s oil, the town’s annual oil output was 1.4 million tons; by the time Du joined the refinery in 1992, that figure was around 400,000 tons. It has been generally declining ever since. By contrast, the country’s largest oil field, located in Daqing in the northeastern province of Heilongjiang, produces around 40 million tons per year.

Although Yumen still had high hopes for its nonextractive industries — which include refining, transportation, and petrochemicals — Du soon noticed that local official attitudes toward the area’s oil-related businesses were shifting. In his first couple years at the refinery, between 100 and 200 new workers joined annually, he says. By 1995, however, those numbers were dwindling. Today, Yumen’s oil industry employs around 14,000 people, compared with 240,000 in Daqing, according to research firm Oil Link.

Change was coming to Yumen’s oil industry in other ways, too. In 1998, the China National Petroleum Corp. — an oil and gas behemoth — spun off most of its domestic assets as part of a wave of restructuring initiatives rippling through many state-owned enterprises. The following year, an affiliate of a new state-owned company, PetroChina, took over Yumen’s oil extraction and refining sectors, tasked with modernizing them and making them more profitable.

Soon afterward came the completion of the new city and the relocation of most of Old Yumen’s residents. The initiative divided the community. On one hand, it allowed many people to move into more modern, comfortable, better-equipped cities like New Yumen and its neighbor, Jiuquan, some 150 kilometers away. On the other, it severed long-held ties to the oil town and sparked a home-buying frenzy at odds with its collective spirit.

At the time, Bei Niao — the pseudonym of a 29-year-old safety inspector at the oil base’s engineering consultancy who is not authorized to speak to the media — was a middle-school student. “My parents and other grown-ups didn’t care about my exams … Everyone was relocating, and children were pushed to one side,” he recalls. “There was sadness, but few people showed it. They were more anxious to get out.”

When the dust settled, Old Yumen’s population had fallen to around 19,000, a mere fraction of its reported, but undated, peak of 130,000. Those who remained mostly did so out of poverty, nostalgia, or stubbornness. In subsequent years, the state largely withdrew from the town, cordoning off abandoned housing blocks and shutting down schools and hospitals. Businesses shut down; food prices rose as sustenance increasingly had to be trucked in from outside. By 2008, apartments on Liberation Street were selling for just 2,000 yuan ($290). (They are worth around 20,000 yuan today, still far lower than homes in New Yumen.)

Du’s family moved to Jiuquan, where they live in comparatively comfortable surroundings. But in some ways, Du’s life now centers around the refinery more than ever: He commutes from Jiuquan for four days at a time, works eight- or 12-hour shifts, eats in the refinery canteen, and sleeps in a basic company dormitory. In the absence of Old Yumen’s former vibrancy, there’s little to keep him occupied outside of work, and Du spends much of his life killing time, thinking of his wife and 16-year-old son back in Jiuquan, or counting down the days until he can retire at 55.

Du, a soft-spoken man in regulation blue overalls, feels ambivalent about how his life has turned out. On the positive side, he feels the refinery pays him well: His salary, which was 160 yuan per month when he joined, rose to 3,100 yuan earlier this year — slightly lower than average salaries in Jiuquan. But then again, he finds modern refinery work grindingly boring. Compared with the 1990s, his workload today is much lighter. Much of the refining process has been automated, and Du spends most shifts monitoring the equipment’s pressure and temperature readings with a dozen other colleagues, occasionally going out on two-hour patrols. “But there are never any accidents,” he sighs.

Sometimes, Du speaks to his father about the drudgery of the refinery. The older man struggles to understand his son’s complaints. Du says there is a generation gap between oil men who worked in Yumen during the glory days of the planned economy, and their sons, many of whom feel trapped for life in unfulfilling jobs while the rest of the country develops rapidly around them.

“We’re all considered sons of the oil field. And for the sake of developing the oil field, you were expected to devote your youth, to sacrifice your sons and grandsons,” Du says. “Well, I’ve given them my youth, but I’ll never give them my son. I’ll not let him follow in my footsteps.”

This is the first in a two-part series. The second part will run next week.