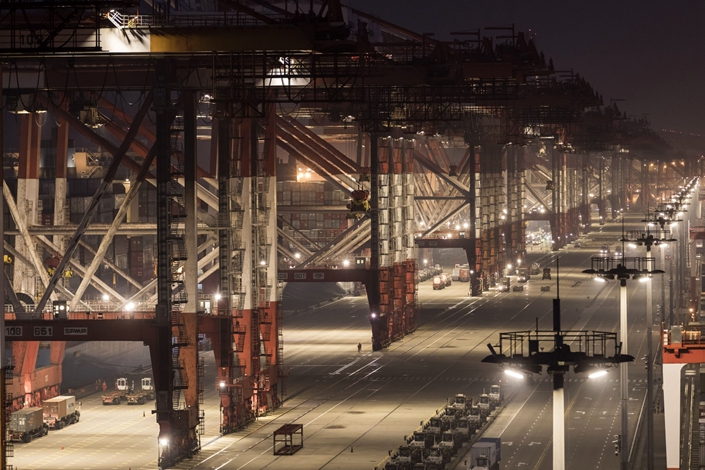 Gantry cranes and trucks move on the docks during early morning at Yangshan Deepwater Port in Shanghai, on Aug. 7, 2019. Photo: Bloomberg

(Bloomberg) — China’s exports declined less than expected in October as optimism rose about an interim trade deal with the U.S., while imports contracted for a sixth straight month.

Exports decreased 0.9% in dollar terms in October from a year earlier, while imports dropped by 6.4%, the customs administration said Friday. That left a trade surplus of $42.81 billion for the month.

The improvement in exports will provide some relief to companies, which are being squeezed by falling profits and weak global and domestic demand. Falling imports indicate that domestic demand is still subdued.

The U.S. and China have agreed to roll back tariffs on each other’s goods in phases as they work toward a deal, both sides said Thursday.

At the same time, the date of the interim deal may be pushed back to December as the two sides wrangle over the details.

“There are some signs of stabilization for exporters. And with the possible rollback of tariffs, next year is very likely to stage a recovery for exports,” said Gai Xinzhe, a senior analyst at Sino-Ocean Capital in Beijing.

Economists had forecast that exports would drop by 3.9% while imports would contract by 7.8%.