Caixin Summit: EU’s Envoy to Beijing Says WTO Should Have a Say in China-U.S Trade Talks 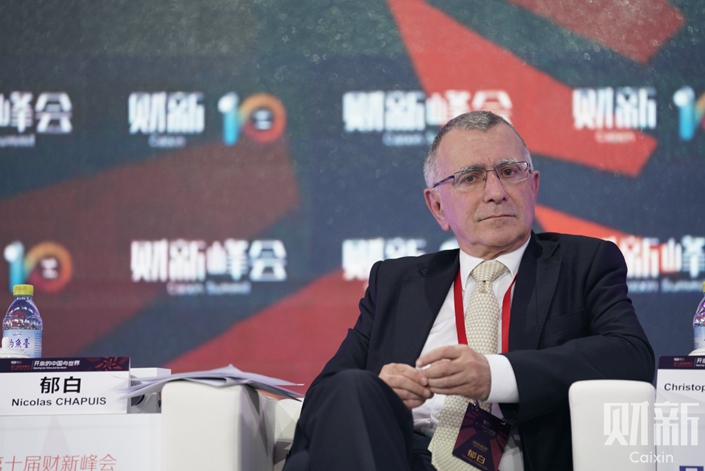 The trade dispute between the United States and China should be settled under the multilateral framework of the World Trade Organization in Geneva, European Union Ambassador to China Nicolas Chapuis said Friday, noting that it’s difficult to tackle global problems with a bilateral trade agreement.

“We think in Brussels that there is no bilateral solution to the problems of our time” — when the world is facing challenges from the anti-globalization movement, Chapuis said at the annual Caixin Summit in Beijing.

“That’s why we observe the U.S.-China [trade] negotiations,” Chapuis continued. “And the question I ask as the ambassador of the union here is — why isn’t that negotiation taking place in Geneva? Should not all of us have a voice to tackle the issues that are being talked (about) in a bilateral framework?”

Chapuis’ comments came a day after the Chinese commerce ministry announced that China and the U.S. had agreed to roll back tariffs on each other’s goods in phases as they work toward a deal.

In written remarks at the opening of the summit, Vice Premier Liu He, who is also China’s lead trade negotiator, said: “Only when all countries are committed to opening-up and cooperation can we achieve prosperity, stability and long-term peace for the entire world.”

In Washington, White House economic adviser Larry Kudlow confirmed the progress in the negotiations. “If there’s a phase one trade deal, there are going to be tariff agreements and concessions,” he told Bloomberg.

Senior White House adviser Kellyanne Conway, said that U.S. President Donald Trump is “anxious” to sign the deal, Bloomberg reported. The two sides have not yet announced a time and location for its signing.

The EU ambassador added that “EU and China have joint responsibility to lead that reform” to tackle the global problems, including those state subsidies that “distort the trading system and create (these) anti-globalization feelings.”

However, Raghuram Rajan, former head of the Reserve Bank of India, the country’s central bank, said earlier Friday at the Caixin Summit that he believed phase one of the U.S.-China deal is “limited,” meaning that it only deals with rolling back tariffs and commitments not to further escalate trade tensions.

Rajan, who is also a finance professor at the University of Chicago, predicted that a comprehensive deal necessary to reassure companies and the global economy will “not happen in the next year or so.”

“It’s hard to see how this [U.S.-China] economic rivalry ends,” he added.