In Depth: How a High-Performing Rural School Left Rural Kids Behind 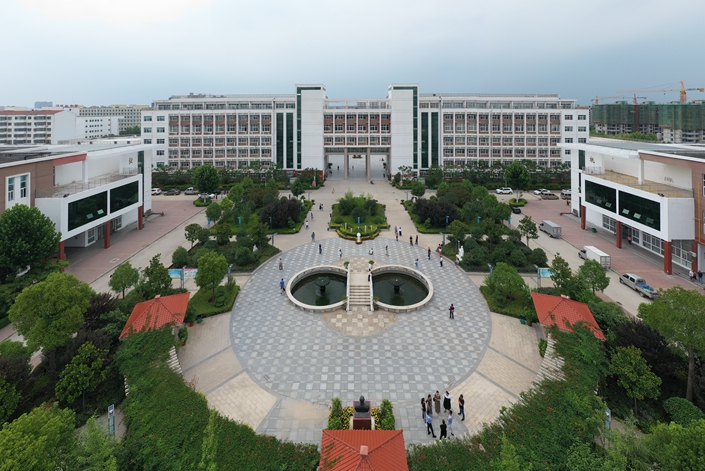 Fifteen-year-old Yang Jia couldn’t contain his anxiety as he glanced out the window of the long-distance bus. He was about to leave his home city of Zhengzhou, the bustling capital of China’s central Henan province, for a poor county high school nearly 250 kilometers (155 miles) away.

One million students in Henan took the college entrance exam, or “gaokao,” in 2019. Less than one-tenth passed. Only 95,000 were admitted to university. The exam is known internationally for its intensity, and the fierce competition has only grown in recent years. Now, Yang’s parents are among many placing their bets on Dancheng No. 1 High School, a famously strict and high-performing institution in a poverty-stricken, rural county at the juncture of Henan and Anhui provinces.

Since 2012, Dancheng No. 1 High School has seen more than 20 students each year admitted to Tsinghua and Peking universities. In 2016 and 2019 the school topped the nation for the number of students admitted to the two top institutions — with 44 and 43 students respectively.

Lin Xiaoying, an associate professor at Peking University’s School of Education, is well aware of the brain drain effect of urban education, which draws in talented students from the countryside to attend urban schools. So the idea of kids going from the city to attend a county school seemed counterintuitive to her at first.

A decade ago Dancheng county’s education system was the worst in all of Zhoukou city. Today, parents from all over China fight to get their students in. How has a rural county’s high school managed to achieve such success? And should it really be a model for other rural county schools? While things may look good on paper, the picture on the ground is different: one of a school that takes advantage of government schemes and is leaving poor students behind.

The road to success

The gate of Dancheng No. 1 High School features a glorious display board with photos of students who went on to attend Peking and Tsinghua. In this year’s intake, 773 of 2,456 students who sat the gaokao achieved a score over 600 out of the max score of 750, which is considered to be an impressive feat.

From when the school was founded in 1951 right up until 2012, only five of its students had been admitted to Peking and Tsinghua. The school’s dilapidated buildings had covered an area of less than 3.3 hectares (8.15 acres). Today it has grown to more than six times that, with two campuses that hold 15,000 students.

Dancheng itself has a population of 1.33 million and a per capita annual GDP of less than 14,000 yuan ($1,978). Agriculture has long been the main economic pillar of the county, which spends more each year than it makes.

But now there’s a new contender: the education industry.

Parents from across Zhoukou, as well as nearby Zhumadian and Zhengzhou in Henan, and Bozhou in neighboring Anhui have increasingly rented and purchased houses in Dancheng in recent years. Housing prices have doubled to 5,000 yuan to 6,000 yuan per square meter in just five years, and several new buildings are under construction.

As for the students, their schedules are grindingly brutal. They rise at 5:30 a.m. and start class 15 minutes later. They’re not done until 10 p.m. They only get two days off per month. Because their schedules are so tightly-packed and they have so much homework, many have to steal time between classes just to shower. Each classroom is equipped with three HD cameras and recording equipment, and the head teacher can check on a student’s classroom performance at any moment. If one is caught daydreaming in class or sleeping during an exam, for example, they pay the price.

Those with the best prospects of admission into Tsinghua and Peking are streamed into an even more grueling program, called “Qing-Bei Seedlings” (after the Chinese names of the two universities). These students study even longer and are treated differently from their peers. One graduate of the program said participants are selected in the first year of high school and separated from the rest of their cohort for four to six hours per week of tailored training. In the first year about 30 are chosen for liberal arts and 100 for science. By the second-to-last year of high school, these classes have been whittled down to 15 and 30 students respectively.

The intensity of such programs has prompted concerns about the mental health and welfare of participants, even in state-run media. Psychologist Wo Jianzhong was quoted in the People's Daily, the official newspaper of the Communist Party of China, saying children in so-called “key,” or high-performing, middle and high schools were more likely to experience mental health issues such as anxiety, depression, obsessive-compulsive disorder and other issues related to stress. Wo also drew a link to suicide. Another psychologist, Hu Deng, said that the top five students in a high school are more likely to have mental health problems and find it more difficult to tolerate mistakes or failure.

Liu Chengzhang became principal of Dancheng No. 1 High School in 2008.

At that time, grades had started to improve but the rate of admittance to undergraduate programs had long remained at 10%. The school’s own enrolment rate was largely dependent on students who had to repeat a year after scoring low marks, and the small campus had restricted the school’s development. In order to make room for its 6,000 students, libraries and other buildings had to be converted into classrooms and 12 students had to be squeezed into each room in the dormitories.

Taking inspiration from the famed Hengshui High School in Hebei province, known for having sent the highest number of students to top universities of any school in the country, Liu began to reform the teaching methods at Dancheng High.

He dramatically increased the pressure on teachers with 16-hour days, daily check-ins, detailed tracking of class attendance, and more exams and papers to grade. The students’ scores in discipline, dorm cleanliness, and tests were also linked to the teachers’ performance evaluations. To account for this, Liu increased teacher monthly salaries by more than 1,000 yuan and provided housing support.

The changes certainly seemed to improve exam scores. During Liu’s first three years at the helm, the gaokao pass rate increased from 12% to 21%. But the real breakthrough, which came after 2012, was down to two major government schemes: independent university enrolments, and a special scheme for poor students.

The leap in independent enrolments came first, though the program had been implemented many years before — it’s an alternative admission pathway which allows universities to enroll any student they deem fit to attend, usually based on test scores and interviews. In 2011, Liu sent a delegation of teachers to Beijing to contact top institutions in order to understand the independent enrolment process.

In 2012, Dancheng High’s independent enrolments spiked. The number of students gaining admittance to Peking and Tsinghua through the scheme jumped from 5 in 2011 to 14, the highest in the province, and sending the total number of students admitted to Peking and Tsinghua past 20 that year. The school had more independent enrolments than any other school in the province for the next four years.

In 2016, Tsinghua and Peking reduced the number of spaces for independent enrolments, and fewer Dancheng students were admitted. So the high school turned to another policy.

The Ministry of Education had announced it would implement a special plan for targeted enrolment in poverty-stricken areas back in 2012. The policy had already provided more than 50,000 additional students per year access university education — and Dancheng was one of 38 Henan counties that qualified for the plan.

Under the scheme, universities were instructed to allot spaces to the top-ranked students in the poorest counties of certain provinces. As a result, Dancheng students accounted for between 40% and 50% of students accepted to Peking and Tsinghua through the national plan in 2016, ranking Henan province first in the country in terms of the number of students admitted to the top two universities under the national scheme.

But while the national plan is aimed at 38 counties in Henan, the opportunities are not equally distributed between the counties. Caixin discovered that nearly 70% of the quota from Tsinghua and Peking universities was concentrated in five counties, including Dancheng. That reality which has become a sore point in Zhoukou.

“To some extent, the scheme has created a problem of ‘super high schools,’” said Wu Qiuxiang, a doctoral student at Beijing’s Renmin University focusing on poverty-specific policies. In his research into poverty-focused education programs for universities, Wu found the special programs had actually widened the high school education quality gap between counties.

The price of success

The high school was unable to maintain its spending on its some 15,000 students with only county funding. The solution was to open a private branch of the school.

Opposite Dancheng High’s “High-Tech Campus” is the school’s privately-run branch. This accepts students from Dancheng and elsewhere that tend to have lower scores, and charges 2,600 yuan in tuition plus another 18,000 to 20,000 yuan in “additional study fees.”

In 2019, Dancheng’s private branch recruited about 2,000 new students alongside 2,860 repeating their courses. Conservative estimates suggest the school’s income from tuition and additional charges amounts to more than 60 million yuan.

And there are other invisible money flows. Caixin has learned of a secret group of “middlemen” who help students gain admittance to Dancheng High. One student who transferred there in his third year of high school said he paid 50,000 yuan to an intermediary who had close ties to the school.

The rise of Dancheng High has not just impacted the education situation in neighboring counties, but also Dancheng county’s middle and elementary schools. As the high school expanded, so did local middle schools, especially privately-owned ones. Nearby Guangming Middle School added five campuses to its original four in the span of a few years. The school charges each student 6,600 yuan per semester. In 2019, it had 3,800 students in grade seven alone.

Guangming is a particularly attractive option because of the number of students who move on to attend Dancheng High. In 2018, the school took 1,933 students from the county — 1,018 of them were from Guangming. That included 383 students in advanced classes, of whom 211 had attended Guangming.

Caixin found that, like the high school, many of the students at Guangming are not from Dancheng county.

The students left behind

The proportion of non-local Dancheng High students gaining admittance to Peking and Tsinghua has increased year after year. In 2019, 16 of the 43 students admitted to Tsinghua went to middle school in other counties or cities.

So the question is: Is this school, in a poor county, which benefits from government poverty alleviation schemes, really benefiting poor students?

More than 70% of current students at the high school have a rural household registration, or “hukou,” according to local education department data. But Caixin heard many stories of those in the advanced classes being children of government workers and teachers.

Caixin also heard stories of students getting their hukou changed to a rural area in order to be admitted. One student, who was not from Dancheng, admitted accessing the “Qing-Bei Seedlings” program by having his hukou changed in order to qualify for the national poverty alleviation program.

Regardless of Dancheng High’s location, it’s clear that many rural students are still missing out — whether in accessing education, preparing for the gaokao, and gaining admittance to the top universities.