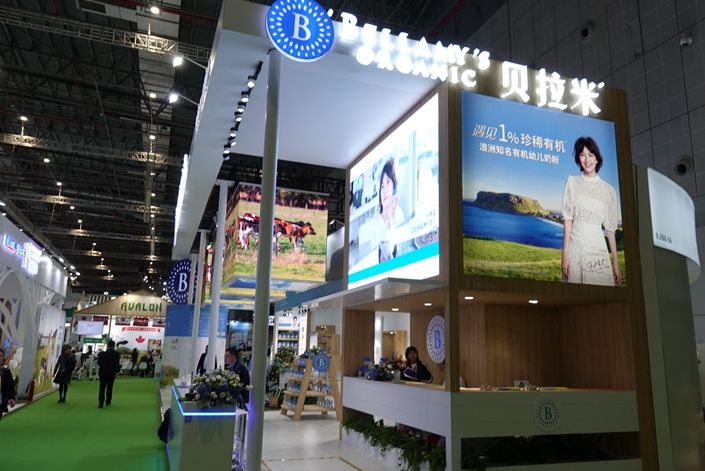 (AFR) — Australian Treasurer Josh Frydenberg has approved a Chinese-government backed A$1.5 billion ($1 billion) takeover of infant formula group Bellamy’s Australia Ltd., but with conditions to head off a domestic backlash.

Following what the treasurer said was a unanimous recommendation by Australia’s Foreign Investment Review Board (FIRB) that the takeover was not contrary to the national interest, the bid by China Mengnui Dairy Co. Ltd. has been given the green light.

The conditions, which Mengniu is expected to accept, include that a majority of its directors be Australian resident citizens, that the company headquarters remains in Australia for at least 10 more years, and that it spends at least A$12 million to establish or improve milk formula processing facilities in Victoria.

China’s appetite for Australian milk formula has drawn concerns that a takeover of Bellamy’s would create a supply gap.

“There must be no risk of formula shortfalls for Australian consumers, nor should we see a farcical repeat of the Van Diemen’s Land sale where buyers promised the world and failed to deliver on just about any of it,” federal parliamentarian Andrew Wilkie warned in September.

Upon approving the takeover, Frydenberg said the FIRB had consulted extensively on all relevant issues and he believed the conditions attached to the sale should satisfy everybody.

“This approval will ensure Bellamy’s can continue to support jobs in Australia and strengthen its ability to expand its domestic market as well as its export opportunities, particularly into the growing Asian market,” he said in a statement.

“The decision will also provide opportunities for the suppliers that contribute to Bellamy’s products, including Australian dairy farmers. These conditions will ensure that Bellamy’s maintains its presence in Australia, and that Bellamy’s proceeds with previously announced investment in infant milk formula processing facilities,” Frydenberg said.

Bellamy’s has the fourth largest share of the Australian infant milk formula market.

Frydenberg made no mention of allegations that Mengniu had sought to drive down Bellamy’s share price in the lead-up to the acquisition.

Before the Bellamy’s board accepted the offer, its share price had plunged 62% over 18 months, due largely to delays in securing registration from China’s State Administration of Market Regulation to sell its organic baby formula in Chinese retail outlets. It was trading at $12.95 on Thursday.

Frydenberg’s approval of the takeover follows approval by FIRB, revealed last month by The Australian Financial Review, of Sinosteel Corp.’s acquisition of Mitsubishi’s interest in a A$9.7 billion Oakajee Port and Rail project in Western Australia. Two Sinosteel subsidiaries paid a peppercorn price of $3 each for 50% stakes each.

The Bellamy’s decision did not involve critical infrastructure such as gas or electricity assets and, thus, presented the Australian government with an opportunity to send a positive message to Beijing.

It comes at a sensitive period in relations between China and Australia. Two weeks ago, Australian Prime Minister Scott Morrison and Chinese Premier Li Keqiang met on the sidelines of the ASEAN summit in Bangkok, and both agreed the relationship needed work.

“China and Australia should step up joint efforts to enhance mutual understanding and trust, properly handle differences, and return bilateral ties to the normal track,’’ Premier Li said, according to China’s Ministry of Foreign Affairs.

He stressed that China is “implementing measures to expand opening up in the service sector, which will provide important opportunities for all countries, including Australia.”

Frydenberg said foreign investment under the appropriate conditions was important for Australia.

“Without foreign capital and investment, Australia’s output, employment and standard of living would be lower,’’ he said.

“The conditional approval demonstrates our foreign investment rules can facilitate such an acquisition while giving assurance to the community that decisions are being made in a way which ensures that Australia’s national interest is protected.”

He said the conditions are enforceable under Australian law and penalties will be applied if there is a breach.

‘Many Australians will be uneasy’

Wilkie, who is from the island state of Tasmania off Australia’s southern coast, where Bellamy’s began as a family-owned operation, was skeptical of whether the conditions would work.

“Many Australians will be uneasy with this sale for all sorts of reasons, and it’s important that the FIRB be seen to act quickly and competently and be prepared to stop it if need be,” he said in September.

Moon Lake breached its loan conditions, casting doubt on conditions imposed by then Treasurer Scott Morrison that the company needed to spend $100 million to upgrade the dairy operation and create 95 jobs.

FIRB and the Australian federal government have taken a hardline view toward Chinese investments, especially in critical infrastructure, after the Northern Territory state government leased the Port of Darwin to Chinese company Landbridge Group Co. Ltd.