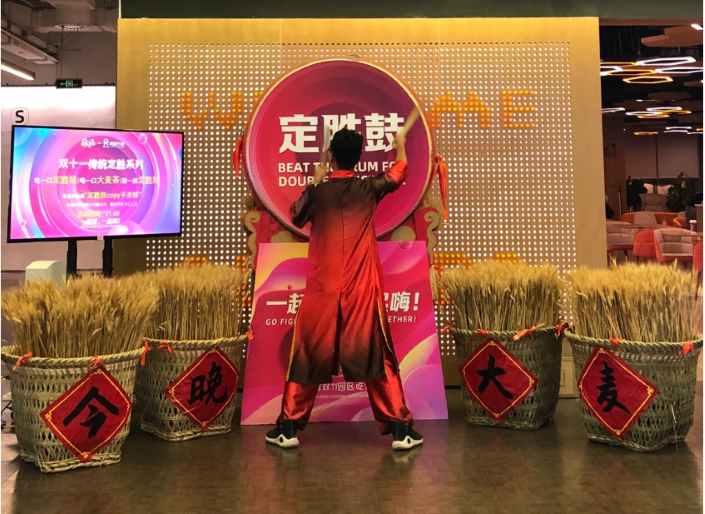 Every country has its own good luck symbols and ceremonies permeating festive occasions from national holidays to weddings. But I was still unprepared for the overbearing presence of such symbols when I attended Alibaba’s Double 11 festival this year at its campus in the eastern city of Hangzhou.

Sheaves of dried barley, whose Chinese name is a homophone for “big sales,” were placed at the main gates and inside buildings, alongside drums representing Alibaba’s determination for victory. Waiting staff wearing auspicious red T-shirts flitted around, pouring guests cups of steaming barley tea.

Around an hour before the company announced record-breaking one-day sales, I wandered into a common area where there stood a giant decorative gourd carved with the Chinese characters for “fight together.” Nearby stood a tray piled high with chicken-stuffed buns. Waiters explained that the phrase “chicken-stuffed” sounded like an expression for a crashed smartphone or computer, while the word for “bun” was a homophone for mobile data packages. Eating the delicacies was meant to ward off unwanted technical difficulties on Alibaba’s busiest day of the year.

In the end, all the superstition seemed to pay off, as Alibaba’s one-day gross merchandise volume — the total revenues of orders placed across its online platforms via its affiliated payment service Alipay — hit a record high of 268.4 billion yuan ($38.3 billion). There was no better way to celebrate than with a slice of “victory cake” baked especially for Alibaba by well-known local chain Zhiweiguan.

The symbols weren’t to everyone’s taste, however. “I don’t care about them,” said Zhou, a local ride-hailing driver who used to be a vendor on Alibaba’s flagship e-commerce platform Taobao. “In the end, sellers only care about turning a decent profit, and consumers only care about quality and price.”

Related: After Double 11 Smashes Shopping Records, What Next for China's E-Commerce Giants?
Share this article
Open WeChat and scan the QR code