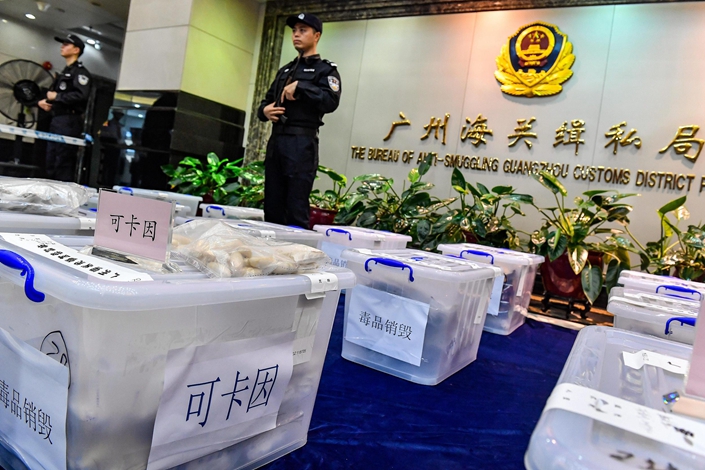 (The Straits Times) Recent clampdowns by China have pushed transnational narcotics networks into the lower Mekong countries like Cambodia, Laos, Thailand and Vietnam, flooding the area with methamphetamine that has remained cheap despite record seizures by the regional authorities.

Amid growing concern that drug syndicates will diversify to fentanyl — a deadly synthetic opioid — ministers and anti-drug officials from Cambodia, China, Laos, Myanmar, Thailand and Vietnam met in Bangkok last week to map out a strategy to increase cross-border investigations and operations.

“Thailand's law-enforcement agencies have had some success in recent years, but national efforts alone are clearly not enough,” said Thailand's Deputy Prime Minister Wissanu Krea-ngam in a statement last Friday. “Organized crime takes advantage of gaps and vulnerabilities that result because of uneven law-enforcement capacity and coordination problems.” Regional cooperation would help create a more coherent approach, he added.

Criminal networks have been deft in adjusting their tactics according to policing strategies, causing methamphetamine prices to plunge to levels last seen 20 years ago, “indicating extremely high levels of availability”, said the United Nations Office on Drugs and Crime (UNODC), which co-chaired the meeting with the Thai government.

“The continuing scale-up of synthetic drug trafficking in the Mekong is not simply a crisis for the region itself, but it is now an international problem,” said Jeremy Douglas, UNODC regional representative. “We are concerned that they will diversify further to synthetic opioids like fentanyl. With all its capacity, North America was not ready, and Asia certainly is not.”

Thailand alone last year seized 17 times the number of meth tablets found in the entire Mekong region a decade ago.

In May, the authorities seized 10 tons of suspected meth precursor chemicals in the Mekong River, en route from China to Myanmar, according to UNDOC.

The borderlands in Myanmar's northern Shan state, where armed groups limit the reach of the enforcement authorities, have been identified as the epicenter of the meth trade.

Efforts by Thailand to suppress illicit activity in the Golden Triangle — the part of the Mekong river where Laos, Myanmar and Thailand meet — only resulted in rerouting of shipments from Myanmar to Thailand via the latter's western border, or via the Andaman Sea.

Preliminary data for this year indicates that the region has already seized more crystal meth than it did last year, said the UNDOC.

The syndicates have been able to keep production going and use new precursors to replace others when their laboratories are raided. With the regional meth market said to be worth $61.4 billion a year, they are seeking new ways to launder profits, including through Southeast Asian casinos.

Governments in the past have made limited impact by targeting street sales of drugs, noted Douglas. He commended the Mekong nations for deciding to focus on “dampening market demand” through measures like increasing cross-border operations and supporting poor farmers in Myanmar and Laos to turn away from the drugs trade.