Editorial: Alleviating Credit Contractions Will Require the Help of Many 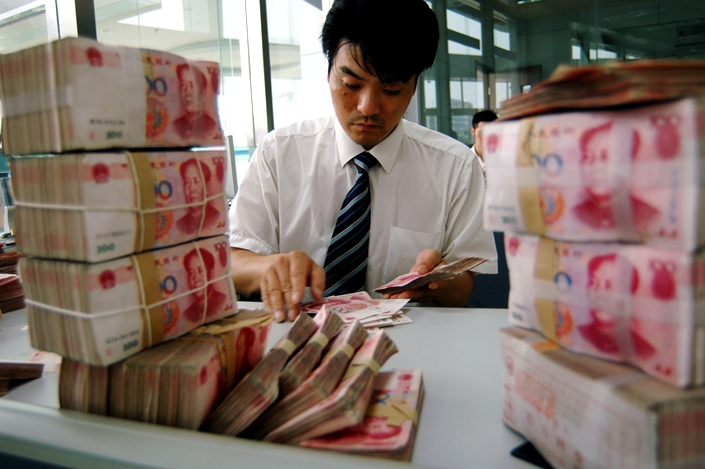 Only through reform can China improve the transmission of monetary policy and optimize the allocation of financial resources. Photo: IC Photo

The downward pressure on the economy has increased, and the scale of credit and social financing has attracted people’s attention. Recently, the central bank issued the monetary policy implementation report for the third quarter of 2019, proposing to ease the pressure on the contraction of local social credit. A few days later, the central bank held a symposium on the monetary and credit situation of financial institutions and admitted that the pressure on local social credit “still exists,” showing the seriousness of the problem. Although there are many reasons for this situation, the fundamental crux is that there are still many institutional and structural contradictions in the transformation of the driving forces of the real economy, leading to sluggish social demand. In this regard, although there is still room for structural monetary policy, it is not yet strong enough. We should increase the intensity of active fiscal policy and, more importantly, accelerate the pace of reform and opening-up. Only by using a multi-pronged approach can we complete the transformation of old driving forces as early as possible and achieve high-quality development. At that time, credit expansion will come naturally.

At present, the downward pressure on China’s economy growth continues to increase, and stabilizing growth has become a top priority. Official data show that the absolute amount of credit supply in the first three quarters of this year is not small. However, the pressure of the contraction of local social credit is increasing. In October, new yuan loans and new social financing decreased year-on-year at a rate below market expectations. Among them, new social financing decreased 118.5 billion yuan ($16.8 billion) year-on-year to 618.9 billion yuan, far lower than the 2.27 trillion yuan in financing in September. There are seasonal factors and other reasons for this situation, so it is not enough to make a judgement on trends. However, this still aroused great concern in the market, and many people have called for more credit to stimulate economic growth.

Supply and demand have always been a pair of contradictions. Short-term credit contractions may be due to insufficient supply or weak demand. It is worth affirming that the decision-making level is always vigilant against “flooding.” As far as the current Chinese economy is concerned, the credit contraction is more due to the lack of effective demand for credit financing in the real economy. Most enterprises are not willing and able to accept too much credit. After all, credit capital has its cost. Some researchers have found that “companies that can borrow a lot of money are reluctant to borrow.” In the past, the corporate sector, which has accounted for more than 50% of debt growth, accounts for less than 20% of the current new debt.

There are many reasons for this situation, which deeply reflects the structural and institutional contradictions of China’s economy. At present, the real estate regulations are too heavy and the growth rate of infrastructure construction is slowing down. The traditional manufacturing industry is in a downturn due to weak external demand and industrial transfer. The biggest problem is still weak manufacturing investment. Regardless of the situation at present or in the foreseeable future, the manufacturing industry will be the cornerstone of China’s economy. Although a new generation of strategic emerging industries such as information technology and new business forms such as producer services is growing, they are unable to become a “pillar” of China’s economy for the time being while the transformation of new and old driving forces in China is still in progress. In addition, regional development differences between China’s East and West, South and North, are increasingly significant. These complex reasons show that the situation of weak credit demand is difficult to change in the short term.

On Nov. 1, 2018, the central government held a symposium on private enterprises. Over a year later, thanks to the intensive introduction of various rescue measures, the financing difficulties of domestic private and small and micro enterprises have been alleviated, but the problem of high financing costs remains prominent. Affected by the economic environment, many enterprises are facing operational difficulties and are affected by “slow variables” such as property rights protections and fair competition. The investment confidence of enterprises is still unstable and there are low expectations for investment prospects. Only by changing this unfavorable situation can domestic credit demand have a viable source. Otherwise, commercial banks and enterprises will fall into a “you can lead a horse to water, but you cannot make it drink” situation.

Of course, in this process, guiding banks to increase credit is not pointless, but its marginal effect has declined. It should also be noted that though policy innovation is a painstaking process, it cannot fundamentally change the characteristics of monetary policy — it is better at cooling the economy than heating it up. With the transformation of China’s economic constitution from “easy to be hot and hard to be cold” to “easy to be cold and hard to be hot,” the effectiveness of monetary policy is discounted.

The structural problems in China’s financial market have been criticized for many years. One criticism is that the proportion of bank loans to private enterprises and small and micro enterprises has been too low for a long time. To make matter worse, these enterprises are the first to be affected in financial deleveraging. Due to its relatively conservative culture, commercial banks are not willing to lend to emerging industries, private enterprises, small and micro enterprises, and other high-risk recipients. In particular, large banks and other financial institutions mainly serve state-owned enterprises and large enterprises. The service awareness for private, small and micro enterprises needs to be enhanced and mechanisms must be improved. Urban commercial banks, agricultural commercial banks, and other small and midsize banks have limited credit capacity, especially in the current economic downturn, so their lending is more cautious. At present, we must deepen the supply-side structural reform of the finance industry, strengthen the opening of the financial market, improve the quality of small and midsize banks, and vigorously cultivate a multi-level capital market. The central bank has repeatedly stressed that dredging the transmission of monetary policy and optimizing allocation of financial resources through reform are of vital importance.

At present, active fiscal policies such as increasing the amount of local special debt and reducing taxes and fees can be strengthened to expand total social demand. However, fiscal policy also faces debt ceiling constraints. Therefore, the fundamental policy is to continue to deepen reform and expand opening-up. The reform of the financial supply side has continuously moved ahead, and the market-oriented reform of the interest rate, represented by the loan prime rates, is advancing. The focus of reform should be shifted to increasing the opening-up of administration in monopolistic industries, creating a fair market environment of marketization and rule of law, and insisting on the neutrality of competition and equality of ownership so as to stabilize market expectations and enhance the investment confidence of enterprises.

All of the above suggestions will require a long time to work. However, it is precisely because of the unsatisfactory progress of long-term reform that the short-term policy now faces a dilemma: as downward pressure on the economy increases, macro-controls are increasingly stretched. Since the structural institutional contradiction is behind the local social credit contractions, the central bank cannot act alone to alleviate it. It will require help from multiple banking institutions.