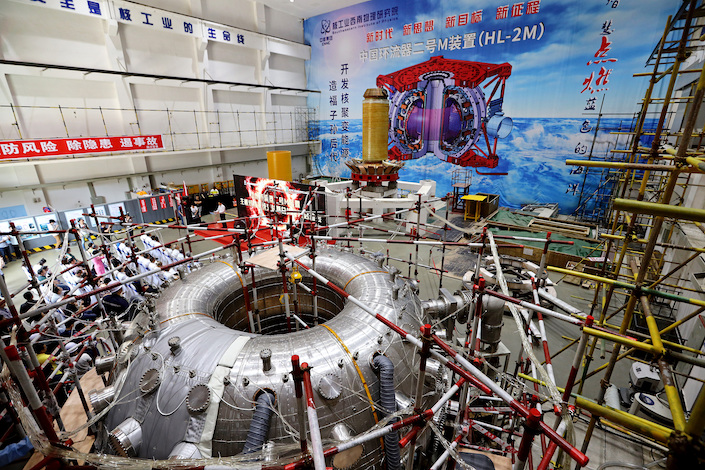 China has not one but rather multiple “artificial suns,” or nuclear fusion reactors, with the latest set to power up next year.

Construction for a fusion research facility based in Chengdu, Sichuan province in southwestern China, is going smoothly (link in Chinese), and it should be operational in 2020, state news agency Xinhua reported.

The facility houses an HL-2M tokamak machine, according to the report. The device uses an approach to fusion called “magnetic confinement” in which magnetic fields contain hot fuel in the form of plasma. This is considered the more promising among several methods of generating thermonuclear fusion power.

Unlike nuclear fission, or the splitting of atomic nuclei as is widely used to create heat to generate electricity, fusion combines nuclei to achieve the same purpose. Still an experimental science, fusion imitates the sun, whose internal reactions transform lighter elements into heavier ones while releasing energy.

According to the report, the installation uses hydrogen and deuterium as fuel. It was built by the Southwestern Institute of Physics, an affiliate of the China National Nuclear Corp. (CNNC). The HL-2M is an upgrade (link in Chinese) from China’s previous model, the HL-2A, according to the CNNC.

China is among seven members funding ITER, an international nuclear fusion research and engineering project that is building a tokamak nuclear fusion reactor in France, considered to be the world's largest magnetic confinement physics experiment.

In March, the CNNC said it planned to complete an HL-2M this year but did not disclose the location.