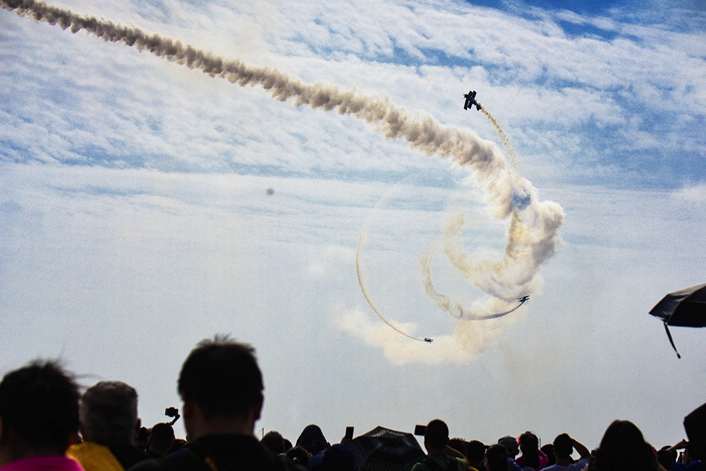 (AFR) — Aerobatics were not part of Paul Goard’s original mission when he set out to mass produce aircraft in China.

Goard, who is based in the New South Wales country town of Cowra but spends most of his time in China, is building single-engine aircraft with his father as part of an aviation joint venture in southern China.

But that’s just the day job. Goard’s family business has sprouted a side interest which has taken on a life of its own. Several years ago, he and some friends decided to assemble an aerobatics team to compete in China’s air shows.

This year, The Airshow Company, as the team is called, has been one of the biggest on China’s airshow circuit, where more than 100,000 people at a time turn out to watch aircraft perform jaw-dropping loops, spins and rolls. “We are flying now against the world’s best formation pilots and our guys are really killing it,” Goard said in an interview following a grueling circuit of air shows across China.

The team includes 10 pilots from Australia, New Zealand and Sweden, along with engineers and logistics personnel.

Goard said the most difficult thing is moving the single-seat Russian aerobatic aircraft around China. Because the military controls the country’s airspace, the planes are disassembled and sent in containers from Australia and throughout China, where they have to be trucked from show to show.

“We can’t fly them from show to show. They are pulled apart, put back into their containers, into their jigs, and they are trucked to the next destination. You have to hope there is no damage along the way,” he said.

The strict rules surrounding China’s airspace also makes it a challenge to practice.

“When we need to practice before the show, it is all controlled by the military. We could be told we are ready to go and then they say ‘no, no flying, bring the airplanes back and sit and wait.’ That happens a lot and we can’t do anything about it.”

Goard and his team have just completed performing at four air shows across China. The season started later than usual this year to coincide with the 70th anniversary of Communist Party rule in China.

Gourd said the crowds in China are staggering and his team is competing with Americans, Europeans and South Africans. “We are now placed in the top three,” he said.

“Some of my guys are farmers, pilots, builders — turned trained aerobatic pilots. They are a range of different guys,” Formation flying requires patience and caution. They start off practicing with two aircraft before bringing in a third and then a fourth. Hundreds of hours of training later, Gourd said they are working on formations of six aircraft.

“It is calculated. We manage the risk. We don’t push it too far. It is pretty full-on and everyone has to be in the right frame of mind, there is no doubt about that.”

Goard is a regular visitor to China. The family company, Brumby Air, set up a joint venture with state-owned Aviation Industry Corp. of China (AVIC) in 2014.

AVIC, which owns a controlling stake in Brumby Air, is working with the company on manufacturing a light sports aircraft for mass production in an aviation market traditionally dominated by military planes rather than small commercial planes.

Brumby Aircraft is helping make the planes from a factory in the southern Chinese province of Fuzhou. The Brumby 610 Light Sports Aircraft went into production in 2017, and plans to ramp up output to 100 a year by 2019 have taken longer than expected.

Gourd said he hopes the type certification which confirms the airworthiness of a particular aircraft will be issued around March or April next year, which would then allow the company to sell planes throughout China. “That will change our business dramatically. I suspect we will be in a lot of provinces after that,” he said. The joint venture has produced 12 planes to date.

“We have quite a big team from all over Australia that we take to China. Pilots, engineers, specialists. It’s a hard place to crack and it’s all about trust and reputation.”