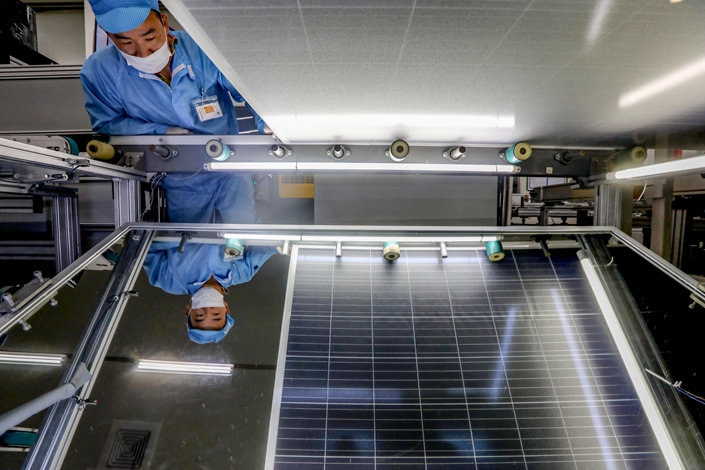 The Mastercard Caixin BBD New Economy Index (NEI) came in at 29.7 in November, indicating that new economy industries accounted for 29.7% of China’s overall economic input activities. The reading was down slightly from 29.8 in the previous month. The NEI measures labor, capital and technology inputs in 10 emerging industries relative to those in all industries.

Of the three subindexes that make up the NEI, the one for technology inputs, which has a 25% weighting in the index, declined 0.2 points to 27.9 in November. The subindex measures the number of research personnel recruited by the tracked industries, and the number of inventions they have created and patents they have obtained.

The subindexes for capital and labor inputs, which have weightings of 35% and 40%, respectively, remained unchanged from the previous month.

Of the 10 tracked industries, the new information technology industry continued to be the largest contributor in November, making up 11 percentage points of the NEI reading. Energy conservation and environmental protection was the industry that grew the fastest, contributing 2.5 percentage points and ranking fourth, up from sixth in October.

The average monthly entry-level salary in new economy industries, based on data compiled from online career and recruitment websites, grew by 23 yuan from the previous month to 10,990 yuan ($1,563) in November.

In general, southern Chinese cities continued to perform better than northern ones, as only four cities from North China — Beijing, Jinan, Tianjin and Qingdao — were among the top 20 cities ranked by labor, capital and technology inputs in the 10 emerging industries.

“The regional economic imbalance between the north and the south is particularly obvious in the new economy,” Senior Economist Wang Zhe and Researcher Ma Chengyao with Caixin Insight Group — a financial data and analysis platform of Caixin Media, said in an article (link in Chinese) on Saturday.

Wang and Ma added that overall development of the southern regions is far better than in the northern regions because southern China has stronger fiscal capacity and is more attractive to capital.

The monthly NEI reports are written by Caixin Insight and Chinese big-data research firm BBD, in collaboration with the National School of Development at Peking University.