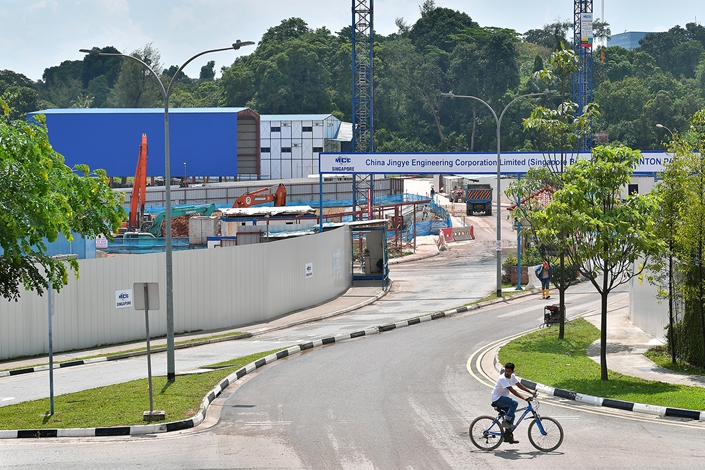 Singapore’s Normanton Park was sold en bloc in 2017 to Chinese developer Kingsford Huray Development for $830.1 million. The main contractor for the site is MCC Singapore, a subsidiary of a China state-owned enterprise. Photo: The Straits Times

(The Straits Times) — The cranes and their operators are hard at work at the former Normanton Park, preparing the site for a new residential estate. Home to many Singapore Armed Forces staff and their families since the 1970s, it was sold en bloc in 2017 to Chinese developer Kingsford Huray Development Pte. Ltd. for $830.1 million.

The Chinese connection does not end there. The main contractor hired to develop the site is MCC Singapore, a subsidiary of China Metallurgical Group Corp. (MCC Group), a China state-owned enterprise and one of the world’s largest contractors of metallurgical construction.

It is hard to miss China’s growing presence across the island and the infusion of Chinese money into Singapore’s economy.

In Chinatown, a 15-minute drive away, local Chinese eateries and stores have been edged out by Sichuan restaurants. At subway stations and bus terminals in the heartland, Old Chang Kee curry puffs now compete with “shaobing,” the ubiquitous snack in China.

These are just the most obvious signs of Chinese investment in Singapore, which started to take off around 2005.

The latest official figures, released by the Department of Statistics (DOS) last month, show that China had pumped in a cumulative $41.8 billion into Singapore by end-2018 — a sum that brings with it not only China’s economic involvement and cultural influences, but also its work practices.

The jump is especially stark when cumulative investment from all countries grew just 4.4 times in the same time period. Official 2019 figures are not yet available.

China’s investments in Singapore still trail behind that of some traditional major players such as the United States, which had invested $292.5 billion by the end of last year, the Netherlands ($127.8 billion) and Japan ($117.9 billion).

But China’s importance as an investor in Singapore has soared, as it surpassed countries such as Malaysia ($39.3 billion) and Germany ($22.8 billion). It rose from the 27th largest investor in Singapore in 2005 to 11th last year, a jump of 16 spots that is higher than for any other investor country.

Chinese money has gone into other parts of Asia too.

From 2005 to date, China has invested $47.7 billion in Indonesia, $44.4 billion in Malaysia, $29 billion in India and $9.4 billion in Thailand, according to the China Global Investment Tracker published by the Washington-based think-tank American Enterprise Institute.

As for countries with population sizes similar to Singapore’s — such as Denmark and Finland — Chinese investments came to $1.4 billion and $16.4 billion, respectively.

The unprecedented growth in China’s investments in Singapore is driven by Chinese companies and entrepreneurs looking farther afield as the East Asian giant’s domestic economy has slowed for much of the last decade.

“China has become the world’s production center, but costs have also risen over time. Many companies have recalibrated their local presence (in China) as the business model of China is shifting rapidly from low-cost and export-focused to centering on innovation and domestic consumption,” said Ivan Ng Wei Chean, a keen China watcher who has worked for multinational companies in the fast-moving consumer goods sector, looking after their markets in the Asia-Pacific and China for the last 15 years.

“However, domestic consumption is slowing, people are cutting costs and the trade war is intensifying the situation,” said Ng, who is now chief operating officer of NavInfo DataTech, a China-Singapore joint venture company specializing in high-precision mapping and positioning.

According to data from China’s National Bureau of Statistics, its gross domestic product grew 6% year-on-year in the third quarter of this year. That accelerated decline in growth in the last quarter was also China’s lowest quarterly economic expansion since record-keeping began 27 years ago, in 1992.

“They (Chinese companies) want to expand to new markets, grow their business. They know their home ground is slowing down and they have to find new markets to expand into and maintain revenue growth,” Ng said.

Chinese investments are highest in the finance and insurance sector, followed by wholesale and retail, Singapore’s official statistics show.

Flush with cash but faced with limited opportunities in China, large investors have been looking over the past two to three years to grow their capital in areas with potential for growth, such as Southeast Asia.

More fund managers who were previously based in China have set up offices in Singapore to help their clients invest in private equity markets in this region.

“There is a lot of capital in the private equity market,” said Wang Yi, chief executive of a locally based asset management company.

“Singapore is the first stop, the market here is mature. It is capital friendly; its legal environment is the best among Southeast Asian countries, so they choose Singapore as their first office in Southeast Asia.”

One sector where Chinese investment is making its presence felt is technology.

According to the China Global Investment Tracker, Chinese companies invested $8.1 billion in Singapore’s technology-related space in the last four years, from January 2015 to March this year.

Another large and more recent investment came from livestreaming platform YY Inc., which bought Singapore-based social media start-up Bigo for $1.45 billion. Bigo began its streaming service in Southeast Asia in 2016 and has more than 200 million registered users in over 100 countries, including Japan, India and the U.S. Through smartphones, users seek out everything from singing and dancing performances and makeup tutorials to trivia games and extreme sports. They also spend money to bestow virtual gifts on their favorite real-time entertainers.

Maybank Kim Eng senior economist Chua Hak Bin said the U.S.-China trade war and China’s Belt and Road Initiative have helped funnel investments into the Association of Southeast Asian Nations (ASEAN). To circumvent U.S. tariff hikes, Chinese companies have been shifting at least part of their manufacturing supply chains and operations to Southeast Asia. “First half of 2019, it (Chinese investments) was coming in a big way, and I think it will continue,” Chua said.

Chinese technology money is also being shifted to Asia because of the resistance and suspicion it faces in the U.S. and Europe. U.S. companies, for example, are banned from doing business with Chinese giant Huawei Technologies without special approval, while U.S. allies Australia and New Zealand have also banned Huawei Technologies Co. Ltd. from their 5G networks.

“Doors are being shut. So, money is finding its way into ASEAN and Singapore is benefiting,” Chua said.

The influx of Chinese money has meant more Chinese settling in Singapore over the years, bringing with them their work ethic as well as social and cultural influences.

Many, too, have taken up citizenship. By the end of 2010 — the latest statistics available — there were 175,155 new citizens and permanent residents from China, including Hong Kong and Macau, according to the Department of Statistics.

Many Chinese companies that have set up operations in Southeast Asia, including Singapore, have tended to transplant managers and workers from China, hoping to replicate on foreign soil their successes back home.

But Chinese investors, like construction company MCC Singapore, which set up its Singapore office in 1992, quickly found that such shortcuts did not work because the people did not understand local cultures.

“When we recognized the issue was in localization, we decided to let local talent outnumber Chinese expatriates so that the company would be steered more like a Singapore ship,” said Tan Zhiyong, chief executive of MCC Singapore, and a permanent resident.