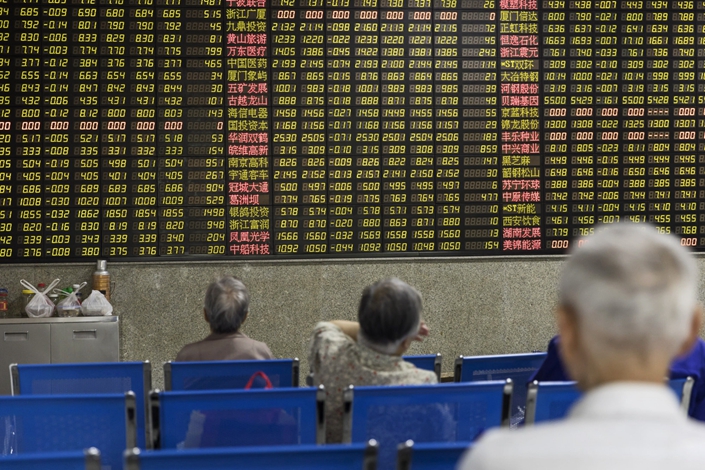 Investors monitor price movements and make trades at a stocks exchange house in Shanghai on May 30 2018. Photo: Bloomberg

(Bloomberg) — Making money in a market that moves so little has become a key challenge for China’s sovereign-bond traders.

China’s 10-year yield has fallen just 9 basis points this year, missing out on a global rally that in August took the world’s stockpile of negative-yielding bonds to a record $17 trillion. The People’s Bank of China helped trigger a sell-off in October when it effectively withdrew liquidity from the financial system, but bonds have since stabilized following a series of unexpected policy-rate cuts and cash injections.

But that wasn’t enough to spur a rally: the central bank signaled this week it will continue to refrain from large-scale easing. A supply surge in local government notes is also concerning traders.

China’s quasi-sovereign policy bank notes — particularly in the three-year tenor — are worth considering, says Jason Pang, a fixed-income portfolio manager at JPMorgan Asset Management. The bonds are in a “sweet spot” as they benefit from any liquidity injections and still provide a decent yield above 3% and greater roll-down returns, he said, referring to the strategy of selling a note as it approaches maturity. Arthur Lau, head of Asia excluding Japan fixed income at PineBridge Investments, also prefers policy bank bonds, as the notes have higher yields than sovereigns. He favors them in five- to seven-year tenors.

Toshinobu Chiba, chief portfolio manager of fixed-income investment at Nissay Asset Management, took an overweight position in dollar-denominated China credit in October and sold Chinese government bonds after consumer prices rose by the fastest pace since 2013 in September. He’s looking to buy China dollar bonds, with a view that the central bank has little room to ease monetary policy if inflation remains high. He says dollar corporate debt will remain attractive in the coming six months, with rising demand for it signaled by a tightening credit spread.

While Pictet Asset Management Ltd.’s head of China debt Cary Yeung is still positive on Chinese sovereign bonds, he’s also a fan of onshore investment-grade credit for its “low volatility, decent carry and stable” fundamentals. He likes short-dated high-yield bonds issued by property companies, as the sector’s sales have been doing well and it might see more favorable policies in the future.

Li Yi, a fund manager at Morgan Stanley Huaxin, whose onshore China bond fund has outperformed 95% of peers over the past three years, says to “pay attention to convertible bonds, treasury bond futures and other derivatives to enhance returns.”

For Manu George, a fixed-income director at Schroder Investment, the current yield of Chinese sovereign debt is already attractive and he has taken a long position. China bonds are likely to see a better year in 2020, he says.