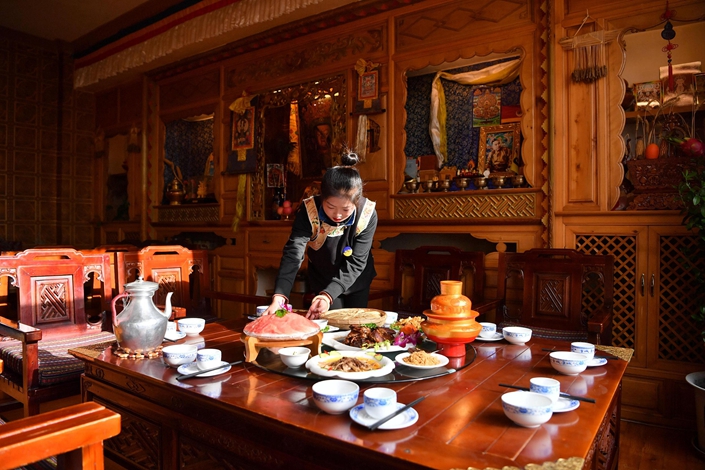 China’s services activity expanded at the fastest pace in seven months in November, thanks in part to an uptick in growth of new export orders for service providers, a Caixin-sponsored survey showed Wednesday.

The Caixin China General Services Business Activity Index, which provides a snapshot of operating conditions in the country’s services sector, rose to 53.5 in November from 51.1 in the previous month, marking the fastest expansion since April. A number above 50 indicates an expansion in activity, while a figure below that points to a contraction.

The gauge for total new business showed a solid increase in November from the previous month, with new export business expanding at the fastest pace in four months.

The measures for input costs and prices charged by services companies both stayed in positive territory, but the former dropped for a second straight month in November, while the latter rose marginally. That suggests “greater company profitability,” said Zhong Zhengsheng, director of macroeconomic analysis at CEBM Group Ltd., an affiliate of Caixin Global.

The measure for unfinished work fell back into contractionary territory in November after two straight months of expansion, “suggesting a strengthening capability on the supply side in the services sector,” Zhong said.

The rate of job creation at services companies edged down marginally in November from the previous month, marking the slowest growth since July.

Services companies’ optimism about the 12-month business outlook in November strengthened from the previous month, but sentiment was still much softer than the historical average, according to the survey.

The Caixin China Composite Output Index, which covers both manufacturers and service providers, came in at 53.2 in November, up from 52 in October. The reading was the highest in 21 months. It was partly driven by a solid expansion in the manufacturing sector.

“China’s economy continued to recover in November, as domestic and foreign demand both improved. But business confidence remained subdued, reflecting the impact from uncertainties generated by the China-U.S. trade conflicts. That will restrain a recovery in economic growth,” Zhong said.

“The trade dispute is the major reason behind the slowing economic growth this year, and will become a key factor affecting the stabilization and recovery of China’s economy next year,” he said.

The services sector, also known as the tertiary sector, includes finance, real estate services, marketing, transportation and retailing. In the first three quarters this year, the sector accounted for 54% of China’s GDP (link in Chinese), according to the National Bureau of Statistics (NBS).

The official nonmanufacturing PMI, which covers the services and construction sectors, rose to 54.4 in November from 52.8 in October, according to data (link in Chinese) released by the NBS on Saturday. The Caixin Services PMI does not cover the construction sector.

A previous version of this story gave an incorrect reading of the Caixin China General Services Business Activity Index for November. It was 53.5.