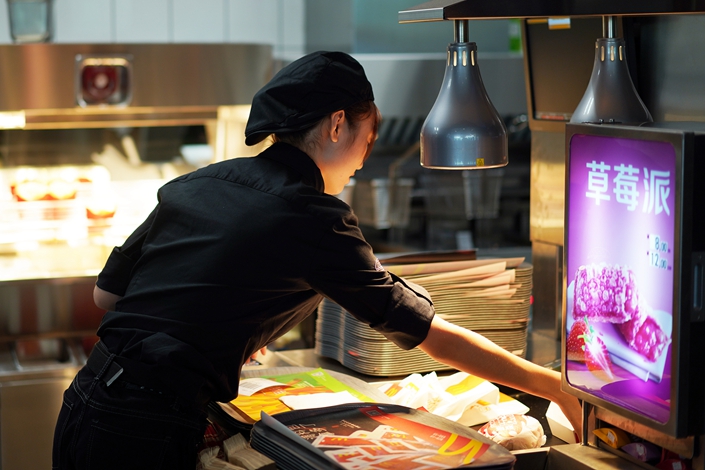 A member of staff at a McDonald's in Xiamen, Fujian province, on Sept. 10. Photo: VCG

China’s services activity expanded at the slowest pace in eight months in October amid a soft market, a Caixin-sponsored survey showed Tuesday.

The Caixin China General Services Business Activity Index dipped further to 51.1 in October from 51.3 in September, marking the lowest reading since February. A number above 50 indicates an expansion in activity, while a figure below that points to a contraction.

Despite the drop, a strong increase in the Caixin China General Manufacturing Purchasing Managers’ Index pushed the Caixin China Composite Output Index to a six-month high of 52. The composite index covers both manufacturers and service providers.

“China’s economy continued to recover in general in October, thanks chiefly to the performance of the manufacturing sector,” said Zhong Zhengsheng, director of macroeconomic analysis at CEBM Group Ltd., an affiliate of Caixin Global.

Total new business placed with services providers grew at the slowest rate in eight months in October, according to the survey. New export business, however, increased at a slightly faster pace than the previous month on higher foreign demand.

The measure for employment across the services sector dipped in October from the previous month’s more than two-year high, the survey showed. Meanwhile, unfinished workloads grew at the fastest pace since February 2017. “This implied a mismatch between labor supply and demand,” Zhong said.

Gauges for input costs and prices charged by services providers both edged down in October from the previous month, while remaining in expansionary territory. That indicates relatively high pressure on the costs of services companies, including those of workers, raw materials and fuel, according to Zhong.

The gauge of services companies’ business expectations fell to the lowest point in 15 months in October, indicating depressed business confidence, the survey said.

The services sector, also known as the tertiary sector, includes finance, real estate services, marketing, transportation and retailing. In the first three quarters this year, the sector accounted for 54% of China’s GDP, according to government data (link in Chinese).

The official nonmanufacturing PMI, which covers the services and construction sectors, fell to 52.8 last month from 53.7 in September amid contracting new business orders, according to data (link in Chinese) released by the National Bureau of Statistics on Thursday. The Caixin services business activity index does not include the construction sector.