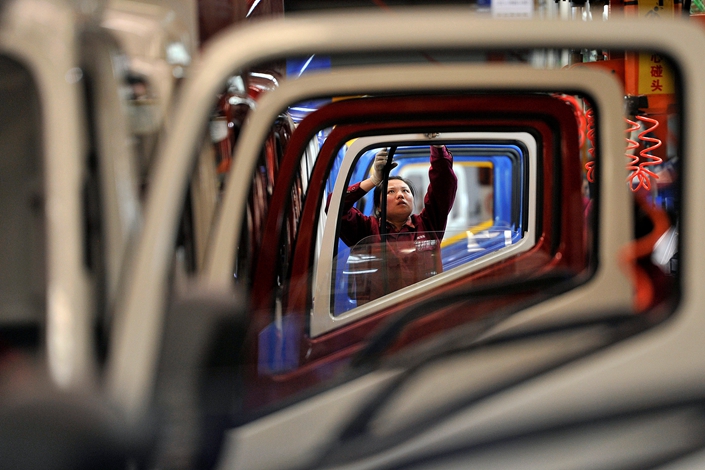 A worker installs rubber onto the windows of vehicle doors on a truck factory production line at JAC Motors in Hefei, Anhui province, July 5, 2019. Photo:VCG

China’s economic growth slid to the bottom of the government’s 2019 target range in the third quarter, the weakest pace in almost three decades, amid sluggish domestic and global demand exacerbated by the ongoing trade war with the U.S.

Gross domestic product (GDP) rose by 6% year-on-year in the third quarter, edging down from 6.2% in the previous three months, the smallest increase in data going back to 1992, figures (link in Chinese) released Friday by the National Bureau of Statistics (NBS) show. The gain was slightly lower than the 6.1% median estimate in a Caixin survey of economists from 23 financial and research institutions.

For the first nine months as a whole, GDP rose 6.2% year-on-year, within this year’s target range of 6% to 6.5% announced by Premier Li Keqiang in March.

Economy activity showed some signs of recovery in September, reversing weakness seen in the previous two months. Value-added industrial output, which measures production in manufacturing, mining and utilities, picked up strongly to 5.8% (link in Chinese) year-on-year from 4.4% in August and 4.8% in July. Retail sales grew 7.8% year-on-year, edging up from a 7.5% the previous month and 7.6% in July, NBS data showed (link in Chinese).

Fixed-asset investment, a key driver of domestic demand that includes infrastructure spending by local governments, increased 5.4% year-on-year in the first nine months, NBS data showed (link in Chinese). That was the third straight month of declining growth and was the weakest since the January to August period in 2018. The NBS only releases cumulative figures for fixed-asset investment.

But infrastructure investment rose 4.5% in the first nine months, edging up from a 4.2% pace in the first eight months and 3.8% in the January to July period, as the central government urged local authorities to speed up construction to avert a deeper economic slowdown. Growth in real-estate investment was stable, rising by 10.5% (link in Chinese) in the first nine months, the same pace as the January to August period, snapping a four-month stretch of declining expansion.

NBS spokesperson Mao Shengyong gave an upbeat assessment of the outlook for the rest of the year.

“There are many positive factors,” he said at a briefing in Beijing on Friday, citing the improvement in the manufacturing PMI in September, a rebound in infrastructure investment, an improvement in producer-price inflation on a month-on-month basis and a narrowing decline in vehicle sales.

Even so, many analysts expect GDP growth to ease further in the fourth quarter given the headwinds facing the economy including slowing global expansion, persistent U.S.-China trade tensions, a sluggish property market amid continued government controls, and the challenges of boosting investment.

“Pressure on economic activity should intensify in the coming months,” economists at Capital Economics wrote in a research note on Friday. “Cooling global demand will continue to weigh on exports, fiscal constraints mean that infrastructure spending will wane in the near-term and the recent boom in property construction looks set to unwind. We expect monetary policy to be loosened before long in response, but it will take time for this to put a floor beneath economic growth.”

Economists at Nomura International (Hong Kong) Ltd. say the deepening impact of the swine fever outbreak on pork production is also likely to hit economic growth. Pork output, which accounts for around 1% of GDP, could fall by around 40% year-on-year in the fourth quarter compared with a 24% decline in the third quarter and 11% slide in the second, they said in a report after the data release. The slowdown in pork output alone could lower real GDP growth by around 16 basis points in the fourth quarter, sending the overall pace of expansion down below 6%.

They expect real GDP growth to slow further to 5.8% year-on-year in the fourth quarter, although for the full year, it will remain within the government’s target range at 6.1%.

The tightening grip of financial regulators on property developers’ financing adds to the risk that property investment will decelerate, Zhu Chaoping, a market strategist from J.P. Morgan Asset Management, said in a research note on Friday.

The prospect of a further slowdown in growth is likely to spur the central bank to loosen monetary policy, some economists said. The People’s Bank of China’s options include another reduction in banks’ reserve requirement ratios, which would release billions of yuan into the financial system for lending, and cutting the interest rate on the medium-term lending facility, a policy tool used by the central bank to manage liquidity in the financial system.