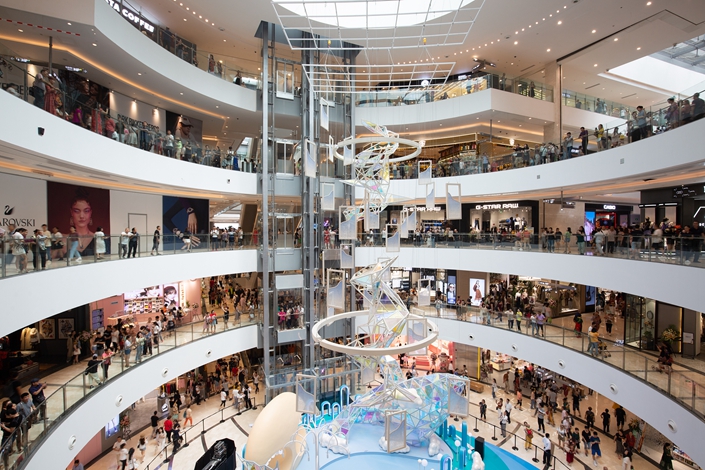 Shoppers flock to the opening of a new mall in the southwestern city of Chongqing on Sept. 6. Photo: VCG

* China’s retail sales in July grew 7.6% year-on-year, marking the lowest monthly growth since April and the second-lowest since May 2003, during the SARS outbreak

* A slowdown in car sales bears some of the blame, but researchers argue that China’s retail sales indicator does not tell the whole story

(Beijing) — After shares of China’s largest pickle-maker — Shenzhen-listed Chongqing Fuling Zhacai Group Co. Ltd. — plummeted on a grim half-year earnings report, some joked that pickles were too expensive for a Chinese consumer class in the midst of downgrading their spending habits.

The average Chinese consumer can obviously afford pickles, some of which retail for around 3 yuan ($0.50) per pack. But the joke shed light on growing concerns about the country’s consumption levels.

In December 2017, the year-on-year growth of China’s retail sales — which include spending by governments, businesses and households — dropped to 9.4% after more than a decade of double-digit single-month growth, according to data from the National Bureau of Statistics (NBS). It then started to show a downward trend, and has not rebounded above 10% since March 2018. In April this year, it fell to the lowest since May 2003, when China was dismayed by the deadly outbreak of severe acute respiratory syndrome, or SARS.

The slowing retail growth is related to the large amount of debt Chinese households have taken on to buy homes, which has crowded out consumption, said Jiang Chao, an analyst with Haitong Securities Co. Ltd. In addition, previous stimulus policies for purchasing cars have overdrawn future demand, he said.

When it comes to consumption structure, consumer staples — products that most people need to live — have been growing at a relatively stable pace in recent years. However, the price growth of nonessential or discretionary goods has fluctuated, with consumers occasionally choosing not to purchase cars and homes. Car sales, which have been in year-on-year decline for much of the time since April 2018, have been gloomy. In addition, tighter property market regulations have put downward pressure on property-related consumption including spending on furniture, home decoration and appliances.

Car-related consumption, which makes up around 10% of China’s retail sales, has been the major cause of monthly retail sales fluctuations over the past year.

China’s retail sales in July grew 7.6% year-on-year, down from 9.8% growth the month before, marking the lowest since April and the second-lowest since May 2003. NBS spokesperson Liu Aihua attributed the monthly drop to a fluctuation in car sales. Changes in emissions standards in June prompted car vendors to put more effort to reduce inventories, causing a sales jump that month and overdrawing consumption in July, Liu said.

Car sales rose 17.2% year-on-year in June, driving the growth of retail sales to a 15-month high, while the sales in July dropped 2.6%, according to NBS data.

China’s car sales have been on a downward trend since April 2018 after a tax break for car buyers ended earlier that year.

China rolled out two stimulus packages for car buyers over the last decade. The first came in 2009 when the country was struggling to fight the global financial crisis. Passenger vehicles with an engine capacity of 1.6 liters or less saw their purchase tax cut by half, to 5% in 2009. The rate was increased to 7.5% in 2010, and returned to the original 10% in 2011. The policy was repeated in the last quarter of 2015 and lasted to the end of 2016 when the purchase tax was cut to 5%. The tax was raised to 7.5% in 2017 and returned to the original level of 10% in 2018.

However, as China’s economic growth continued to slow in 2019, National Development and Reform Commission Vice Chairman Ning Jizhe said in January that the government would roll out policies to stimulate consumption, especially that of cars and home appliances. The highly-anticipated stimulus measures turned out to be weaker than what the market had expected. In April came a rumor that the government was going to ease license plate quotas for cars and cut the purchase tax by half in rural areas, but the official document failed to mention the former, and merely said that local governments could implement stimulus policies for car purchases in rural areas if conditions allowed, without specifying those conditions.

The Chinese mainland’s car ownership increased to 175 cars per 1,000 people in 2018 from 38 cars in 2008, according to a note by Nomura International (Hong Kong) Ltd. Based on past experience in South Korea and Taiwan, where car sales growth slowed and remained slow after reaching the 200-unit-per-1000-people mark, and the fact that the launch of the last sales stimulus policy was only about four years ago, it is unlikely that car sales will significantly improve.

However, officials with the NBS, alongside other researchers, have argued that social retail sales data understate the country’s consumption as they don’t include the majority of services consumption. By the NBS’ definition, retail sales refer to goods and catering services purchased by customers. Other services are not included in the indicator.

Final consumption expenditure is a more complete indicator of consumption because it includes both services and goods. It made up 60.1% of China’s gross domestic product growth in the first half of 2019 and its growth has remained stable, around 10%, in recent years.

However, consumption in several services sectors has shown signs of slowing since the beginning of this year. The year-on-year growth of China’s national services output index dropped to 6.3% in July, down 0.8 percentage points from the previous month, according to the NBS. The July reading also marked the first time that the indicator had dropped below 7% since the NBS started to publish the monthly data in March 2017.

“Households’ capacity to consume is somehow restrained,” said Li Xunlei, chief economist at Zhongtai Securities Co. Ltd. Over the past few years, the growth of household income has trended downward, and the income gap among households has increased, Li said.