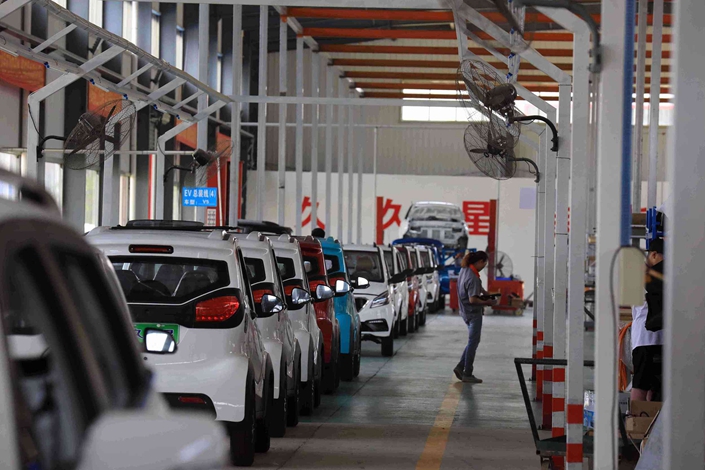 China’s major economic indicators for July painted a worse-than-expected picture for the country’s economic growth, as monthly retail sales and value-added industrial output grew at some of their slowest rates in a decade or more, official data showed Wednesday.

The yield of one of China’s most actively traded 10-year sovereign bonds dropped below 3% for the first time in three years, falling to 2.9975% by the time of publication Wednesday, data on the National Interbank Funding Center showed, amid concerns over mounting downward pressure on economic growth. Bond yields fall when prices increase.

Fixed-asset investment, a key driver of domestic demand that includes infrastructure investment, increased 5.7% year-on-year in the first seven months of this year, according to data released by the National Bureau of Statistics (NBS) (link in Chinese). The reading was down slightly from 5.8% growth during the first six months of the year. The reading missed a Bloomberg economists’ poll with a median forecast for 5.8% growth.

Government-driven infrastructure investment rose 3.8% year-on-year in the first seven months of this year, down from 4.1% growth in the first six months, the data showed. The reading hasn’t been this low since the whole of 2018.

Investment in real estate development rose 10.6% from a year earlier (link in Chinese) in the first seven months of 2019, down from 10.9% growth in the first six months and marking the lowest rate since the whole of 2018, NBS data showed.

“We see more weakness on the horizon,” wrote economists at research firm Capital Economics in a note. “After improving in June, economic conditions worsened across the board last month as growth in industrial production, capital spending and retail sales all dropped back.”

Value-added industrial output, which measures production at factories, mines and utilities, rose 4.8% (link in Chinese) year-on-year in July, down from 6.3% growth in the previous month and marking the lowest rate since the January-to-February period in 2009. The Bloomberg median forecast was 6% growth.

“This adds to broader evidence of subdued factory activity, including weak PMI readings and the return of producer price deflation,” the economists at Capital Economics said.

Retail sales, which include spending by governments, businesses and households, grew 7.6% (link in Chinese) year-on-year in July, down significantly from 9.8% growth the month before. The reading marked the lowest since April and the second lowest since May 2003 when the growth rate was 4.3%. The rate also missed the Bloomberg median forecast of 8.6% growth.

“The monthly drop in retail sales was mainly caused by the fluctuation in car sales,” NBS spokesperson Liu Aihua said at a briefing (link in Chinese). Changes in emission standards in June prompted car vendors to make more efforts to reduce inventories, causing a sales jump in June and overdrawing consumption in July, Liu said.

China also reported weak credit data earlier this week. China’s total social financing, a broad measure of credit and liquidity in the economy, grew by a net 1.01 trillion yuan ($140 billion) in July, down a whopping 210.3 billion yuan from last July, data from the People’s Bank of China showed.