In Depth: The Inconvenient Truth About China’s Investment Funk 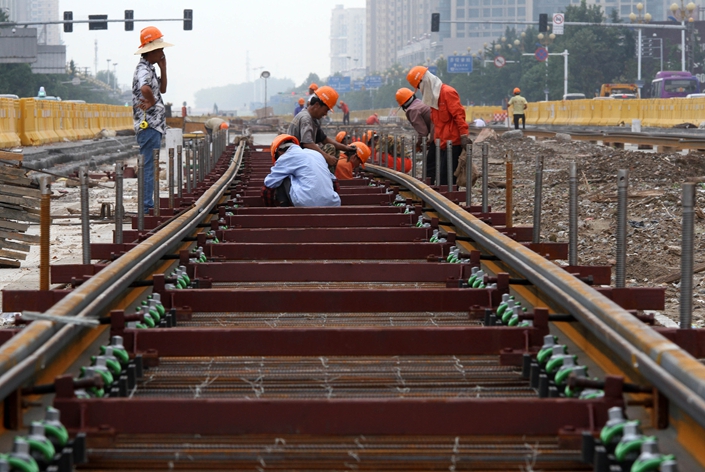 A light railway is under construction in August 2018 in Huai’an, East China’s Jiangsu province. Photo: VCG

The deputy director of Hunan province’s statistics bureau and his researchers didn’t pull any punches when they reported on the dismal state of infrastructure investment.

“In the current situation of debt prevention and control, declining efficiency, and the narrowing opportunities for investment, the pressure to stabilize investment remains immense,” Li Yannan and his colleagues wrote in their half-year report (link in Chinese) on the province’s economy in July. “Investment in some key areas is depressed … support for some major (infrastructure) projects is weak … funding is inadequate.”

Infrastructure investment, which accounted for more than 20% of the province’s total fixed-asset investment, fell 5% year-on-year in the first half, they said. Planned spending on major projects, which are those involving total investment of more than 50 million yuan each, fell 1%, and actual spending on general projects fell 1.3%. Xiangtan, one of Hunan’s most debt-ridden cities, reported a 25.3% slump (link in Chinese) in infrastructure investment in the first half, with the value of actual spending dropping 5.3%. The number of planned major projects stood at 243 at the end of May, 58 lower than in the same period in 2018.

The situation in Hunan, a mountainous central province and the early home of Mao Zedong, is a microcosm of what’s happening across the country. Despite more than a year of exhortations from the State Council and Communist Party leaders for local governments to boost infrastructure spending to cushion a slowdown in economic growth, it’s just not happening.

In the first half of 2019, fixed-asset investment (FAI) excluding spending in rural areas, rose by just 5.8% year-on-year, edging even lower than the 6% increase in the same period in 2018, and down from an 8.6% pace in the first six months of 2017. The numbers were even worse for infrastructure — a gain of just 4.1% year-on-year, down from a 7.3% pace in the first half of 2018 and 21.1% in the same period in 2017. Investment in the manufacturing was the gloomiest — rising just 3%, less than half the growth seen a year earlier. Property investment put in the best performance, rising 10.9% in the first half, almost double the pace of overall FAI.

The nationwide investment figures mask vast differences both regionally and by individual sectors. A handful of regions saw relatively strong infrastructure investment growth, with Shanxi, the depressed industrial, coal-rich northern province reporting a jump of more than 20%, while others including Shanghai, Hunan and Chongqing reporting an outright drop.

The National Bureau of Statistics (NBS) stopped publishing infrastructure investment figures in nominal yuan value in 2018, stating that it was overhauling the way it calculates the investment data and feared this could lead to confusion and misleading comparisons.

FAI has traditionally been a key driver of China’s economic growth with three main pillars — infrastructure, manufacturing and real estate. Together they accounted for around 70% of overall investment in 2017, according to NBS data. During the global financial crisis in 2008, the government unleashed a powerful monetary stimulus to encourage spending, which helped the economy escape the slump that gripped the rest of the world. Investment grew much faster than gross domestic product (GDP), leading the International Monetary Fund among others to warn China’s increasing dependence on investment for growth was a risk to the sustainability of the country’s expansion. At its peak in 2013, investment accounted for 55.3% of real GDP, although as a share of nominal GDP, calculated without taking inflation into account, the peak was 48% in 2011.

A decade later, investment is not the sure-fire economic shot-in-the-arm it once was. Companies and local governments are maxed out on debt, regulatory crackdowns on shadow banking and illegal local authority financing have cut off some sources of funding and fiscal revenue has slumped as a result of massive tax cuts. There are fewer quality projects for companies and local governments to invest in that offer good returns, and a campaign to stamp out a bubble in the residential housing market has curbed the enthusiasm of property developers.

As a government-backed activity, infrastructure investment should be easier to ratchet up than manufacturing and property, which are more market driven. But it’s been a tough sell, partly for financial reasons.

Although policymakers have taken action to limit investment funding from some shadow banking sources to prevent financial risks from building, they have encouraged the growth of bank lending and boosted local government debt — the quota for special-purpose bonds (SPB), which are meant to be repaid from income generated by the projects they invest in rather than from local budgets, was increased by 59% this year to 2.15 trillion yuan. In the first half of 2019, provincial-level authorities issued 2.8 trillion yuan of bonds, double the amount the sold in the first half of 2018.

Stimulus policies to stabilize infrastructure investment have not really had an impact, according to Zhu Baoliang, chief economist at the State Information Center, a think tank affiliated with the National Development and Reform Commission (NDRC). “The marginal effect of government policies has clearly diminished.”

He noted that since the crackdown on illegal financing by local governments, the transmission time for fiscal spending to impact infrastructure investment has lengthened from around three months to more than six months.

Controls on local governments’ hidden debt and illegal fundraising, and tightened restrictions on borrowing via local government financing vehicles has increased the difficulties for local governments to increase infrastructure spending, said Zhang Wenlang, chief macroeconomic analyst at Everbright Securities. The only way now to finance public welfare projects that are not-for-profit is via government bonds or fiscal spending, Zhang said. Only a limited number of commercial projects can be funded through loans.

The NDRC, the country’s economic planning agency, approved 94 FAI projects with a total planned investment of 471.5 billion yuan in the first half of the year, an 81% surge on the same period last year.

But several analysts told Caixin that despite the acceleration, local governments do not have a strong incentive to borrow unless regulations on debt are relaxed. On top of that, given that funds raised through SPB will have to be repaid from the projects themselves, local authorities will be reluctant to invest if returns are low.

Some provinces are running out of projects to invest in. A government official in one eastern province told Caixin that spending on building expressways is 40% lower than last year, and next year most spending will go to unfinished projects, with very few new ones getting off the ground.

“There are fewer and fewer areas with good investment returns now, after the high-speed rail construction spending spree and the shift in spending to city-level rather than national-level investment,” said Lu Ting, China economist at Japanese investment Bank Nomura. “There is still room for infrastructure to grow, but investments have to be made in the right place which means more resources need to be allocated to large cities.”

Manufacturing investment is more difficult to encourage given its dependence on the desire of the corporate world to borrow and spend against a backdrop of slowing domestic demand, rising trade tensions and growing jitters in financial markets after the state takeover of Baoshang Bank.

But manufacturing investment may have bottomed, according to Zhong Zhengsheng, director of macroeconomic analysis at CEBM Group, as the spending slump caused by a lack of investment in capacity expansion is partly offset by a surge in expenditure on what’s known as technology transformation.

Technology transformation has become a focus of government industrial policy and involves the upgrading of technology and equipment in domestic companies to improve efficiency, the quality of goods and profits. Much of it is being funded by state spending, special local government-backed funds, as well as tax breaks and other incentives such as cheap land.

Central China’s Hubei province, for example, started (link in Chinese) a three-year plan in 2017 that it called “billions of yuan on thousands of companies” to support technology transformation. It established a 50 billion yuan provincial-level fund and told every city level government to set aside 3 billion yuan to support key enterprises. Companies that borrow money for technology transformation projects will be offered subsidies on as much as 5 million yuan of interest payments per project.

Although many cities have strong demand for this kind of investment because they need to carry out industrial restructuring, many researchers have warned that spending driven by government policy could lead to resource misallocation and inefficient investment.

Despite government efforts to kick-start investment, slow growth is the new normal, according to the Development Research Center, a think tank under the State Council. “Over the next 10 years, investment will grow slower than GDP,” it said in a report, forecasting that investment as a percentage of nominal GDP, without taking inflation into account, is likely to fall to 32.5% from 42.6% in 2018.

That may be good news for China’s long called-for rebalancing, but it isn’t much comfort to provinces like Hunan, which are struggling to meet their targets. But, as Li Yannan and his colleagues noted in their first-half review, all they can do is try harder and hope.

“We will stick tightly to the annual target for industrial construction projects, continue to attract more investment with greater intensity … and accelerate the progress of on-going construction projects,” they wrote. “We will make greater efforts to overcome our weaknesses in order to promote steady and healthy economic development.”