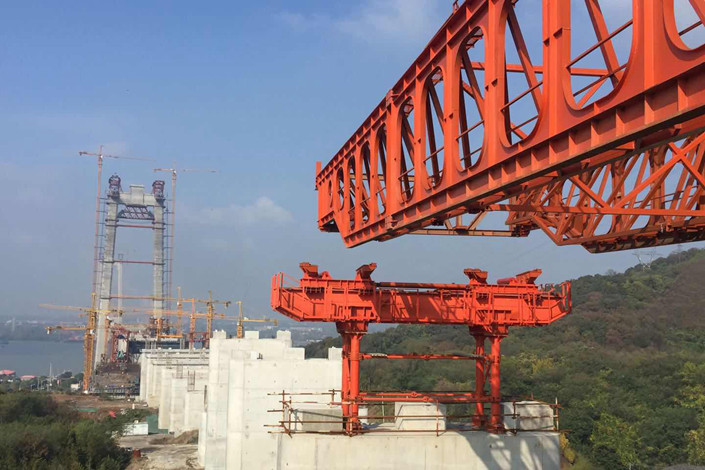 A bridge being built over the Yangtze River in Zhenjiang, Jiangsu province on Nov. 12. Photo: IC

One of China’s top financial regulators said the authorities are looking at ways to help local governments cope with the mountains of debt they’ve accumulated off the books over the years. That could be good news for Zhenjiang, one of the most indebted cities in the country.

Zhenjiang, a port city in the eastern province of Jiangsu known for producing fragrant black vinegar, had racked up interest-bearing liabilities of 393.4 billion yuan ($58.8 billion) at the end of 2017 through its local government financing vehicles (LGFVs), nearly 14 times the city’s general fiscal revenue that year, according to analysts at Guoseng Securities. That’s the highest among all cities in Jiangsu, which itself is one of the most debt-laden provincial-level regions in China, they estimated in a report in August. Jiangsu has the largest amount of outstanding urban construction investment bonds through special purpose financing vehicles out of all the country’s regions, they said.

These local government financing vehicles (LGFVs) are companies set up specifically to raise money through bonds and loans which local governments themselves are banned from taking on. Local authorities keep the debts of the vehicles off their books although they have often guaranteed them or are liable for repaying them.

The China Banking and Insurance Regulatory Commission (CBIRC) will deal with all indebted cities under the “One City One Policy” principle, Wang Zhaoxing, a vice chairman of the agency, told Caixin on Monday when asked about the commission’s plans for Zhenjiang. Support will be tailored to suit the conditions of each city with the aim of strengthening their ability to pay the money they owe and dealing with their borrowing problems, he said.

He outlined several options, including one that allows some projects to put up additional collateral for their borrowings. Another is to permit some LGFV debt to be swapped into local government bonds, Wang said after a briefing. The swaps often come with strings attached, including the requirement that creditors forgive some of the original debt.

Another possibility would be to let some local governments increase sales of special-purpose bonds to strengthen their finances, he added. Special-purpose bonds, which were introduced in 2015, are meant to be repaid with income generated by the projects they are invested in, as opposed to “general bonds,” which are paid back using fiscal revenue. They were created to bring more transparency to local government debt.

The central government started efforts to clean up local government debt back in 2013, after a monetary and fiscal stimulus announced in 2008 to cushion the country from the impact of the global financial crisis saddled the economy with one of the highest debt burdens in the world when measured against gross domestic product (GDP).

China’s total debt-to-GDP ratio jumped to 253.1% as of June 2018 from 138.4% at the end of 2008, data from the Bank for International Settlements show, while total credit to the government sector stood at 47.6%, up from 27.1% at the end of 2008. But the International Monetary Fund’s latest Article IV report on China estimates that government debt could be as high as 67.5% of GDP when LGFV liabilities, and debt tied to special construction funds and government guided funds are included.

Wang told Monday’s briefing that the debt-to-GDP ratio of the local government sector has started to decline, although he did not provide figures, and said efforts will continue to further reduce the debt.

Zhou Liang, another CBIRC vice chairman, said at the same briefing that preventing risks in one region from spilling over into the financial system as a whole will be a priority for regulators as they continue to tackle local government debt.

“(We) must not allow regional risks to spark systemic risks. This is a bottom-line that regulators must ensure,” he told reporters.

The regulators’ comments echo President Xi Jinping’s speech on Friday in which he reiterated that preventing systemic financial risks is the “fundamental task” of all financial work. Xi spoke at a study session of the Politburo on deepening financial supply side reform and enhancing the financial sector's ability to serve real economy.