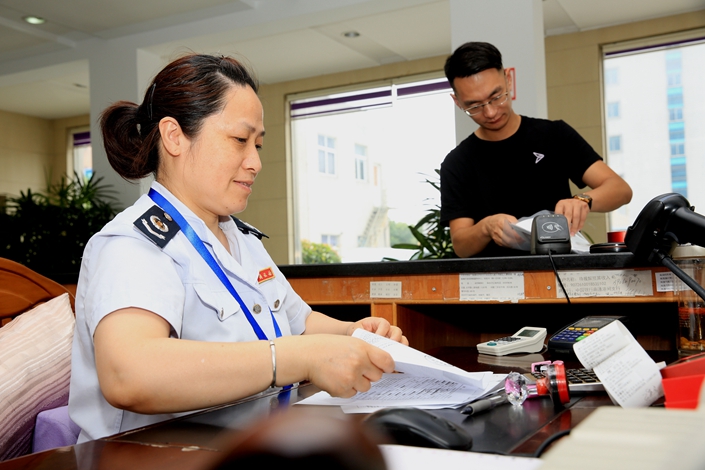 As tax and fee cuts bite hard into China’s fiscal revenue growth, central and local governments are scrambling for new ways to raise money to fund their spending, with the top targets so far including the sale of state-owned assets and creaming off more profits from state-owned enterprises (SOEs).

In the first half of 2019, tax revenue rose by just 0.4% to 9.24 trillion yuan ($1.34 trillion), down from a 13.9% increase in the same period last year as economic growth slowed and the government rolled out a program to slash taxes and fees by almost 2 trillion yuan, on top of the 1.3 trillion yuan of reductions in 2018. Some provincial-level governments, including Guizhou, Xinjiang, Beijing and Gansu, even reported an outright drop in fiscal revenue.

In contrast, revenue from nontax sources surged by 21.4% to 1.54 trillion yuan, according to data released (link in Chinese) by the Ministry of Finance. The central government alone collected 168.5 billion yuan more from SOE profits in the first half of 2019 than during the equivalent period last year, accounting for 62% of the growth in nontax revenue, Liu Jinyun, an official at the Ministry of Finance, said at a briefing (link in Chinese) Tuesday.

Guangxi has made a big effort to narrow the gap between the region’s spending, which rose by 11.8% in the first five months of the year, and its revenue, Sun Liangquan, an official with Guangxi’s finance department told Caixin earlier this month “We have disposed of many idle state-owned assets including unused assets such as factories and land.”

In addition to selling assets, local authorities in the coastal province of Fujian are being encouraged to collect more profits from local SOEs, including financial institutions.

In Xiamen, the local finance bureau has started clawing back “carried over” funds – money from last year’s budget that has yet to be spent – from other local government departments if it is unused for more than a year, Lin Zhicheng, a deputy head of the bureau, told Caixin. Those funds are then reallocated for infrastructure spending, he said.

In a rare move, Chongqing, a municipality of some 30 million people in Southwest China, ditched its 2019 growth target for fiscal revenue, publishing a midyear budget adjustment plan that cut the goal to 4% from an original 7%. Although no other provincial-level governments have yet followed suit, Sun from Guangxi said that officials may have to do the same if tax revenue continues to decline.

Some officials have admitted that their targets set at the beginning of the year were too ambitious and failed to fully take into consideration the impact of the cuts in fees and taxes imposed by the central government.

Li Wei, deputy director of the Guangxi Taxation Bureau, said that the actual change in tax revenue in most areas, especially at the lower county levels, has been vastly different from the growth target set at the beginning of the year. The gap in some counties has reached more than 30 percentage points, Li said.

This story has been updated to clarify what local authorities in Fujian are being encouraged to do, which is to collect more profits from local SOEs. It also corrected a statement by Li Wei, deputy director of the Guangxi Taxation Bureau, regarding local tax revenues.