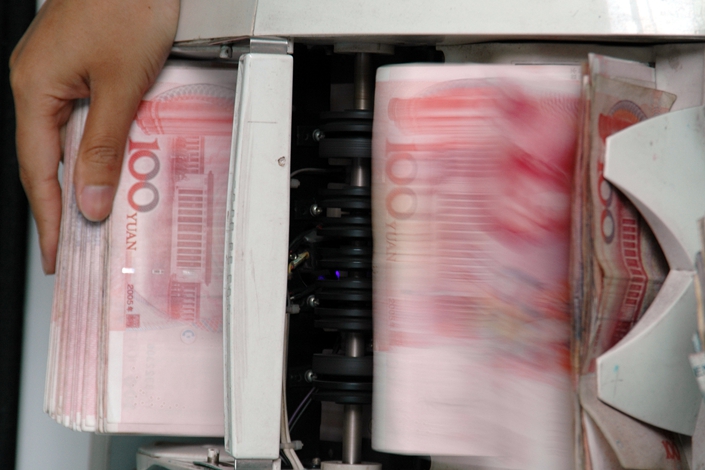 China’s central bank will cut the amount of cash lenders must set aside as reserves, freeing up $126 billion of liquidity in the banking system in a bid to support the economy, the People’s Bank of China (PBOC) said Friday.

The central bank will lower banks’ reserve requirement ratios (RRRs) by 50 basis points for all banks Sept. 16, according to its statement (link in Chinese). The cut does not apply to finance companies, financial leasing companies and automobile finance companies. A basis point is a hundredth of a percentage point.

In addition, the PBOC will lower RRRs by an additional 100 basis points for city commercial banks that operate only within the provincial-level regions where they are based, according to the statement. It plans to implement the cuts in two phases, with one 50 basis-point reduction Oct. 15 and the other Nov. 15.

The moves came just one day after Beijing signaled that it would ease monetary policy with both broad and targeted RRR cuts to support the real economy amid headwinds that include slowing growth and a trade war with the U.S.

Analysts said the two-pronged cuts exceeded market expectations, although an RRR cut was widely expected. But the central bank said in a separate statement that the move doesn’t reflect a massive step up in easing.

“The cuts are not flooding the economy with stimulus, and the stance of prudent policy has not changed,” the PBOC said. The reductions will offset the tightening effect of coming tax payments and gradually release capital to keep banking system liquidity stable, the central bank said.

The across-the-board RRR cut will reduce banks’ funding costs via lower quotes for the loan prime rate (LPR), encouraging loan issuance, analysts at ANZ Research said in a research note. China last month reformed the LPR mechanism and made it the loan market benchmark in a bid to further liberalize the interest-rate regime and reduce borrowing costs.

Since last year, China’s central bank has made five targeted and across-the-board RRR cuts to support the economy. In addition, it cut RRRs for some small and midsize rural commercial banks in May. The PBOC has set up a differentiated reserve rate policy framework via the cuts, which includes three ladders of requirements applying to different institutions.

After the latest reductions, the standard RRR will be 11.5%-13% for large banks, and 11%-9.5% for medium- and small-sized banks. A lower 7%-10% rate will be applied to city commercial banks, county-level banks and rural institutions.

“The liquidity released by the cut will help to pull down interbank rates in the short run,” said Julian Evans-Pritchard, senior China economist at Capital Economics. “But to keep these rates low and ensure that they feed through to lower borrowing costs for firms, the PBOC will also need to start cutting the rates on its lending facilities.”

“We anticipate two 200 basis-points worth of RRR cuts by early next year, alongside a 75-basis-point reduction in the PBOC’s 7-day reverse repo rate and 1-year medium-term liquidity facility (MLF) rate,” Evans-Pritchard said. “This should feed through to a similar-sized decline in the LPR, upon which new loans are now priced.”

Analysts at ANZ Research suggested more prudence on further policy moves in the near term, saying there will be “limited room for further RRR cuts in 2019, and the next policy move will be cutting the money market rate, likely in Q4.”

The latest cuts will bring down the next LPR quote, which will be released Sept. 20, by 5 basis points to 4.2% for a one-year loan, said Wen Bin, a senior researcher at Minsheng Bank. Analysts have widely argued the previous 6 basis-point cut of the first LPR quote Aug. 20 was not enough.

China’s major economic indicators for July painted a worse-than-expected picture for economic growth, as monthly retail sales and value-added industrial output grew at some of the slowest rates in a decade or more.

The National Bureau of Statistics is scheduled to release a slew of economic data Sept. 16, including fixed-asset investment, retail sales and value-added industrial output.