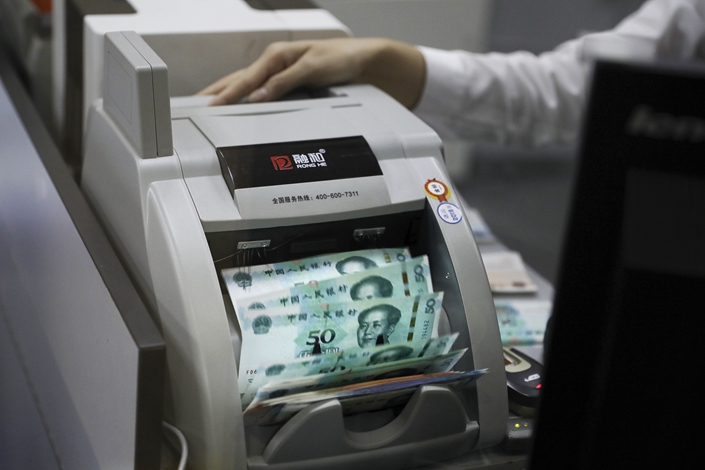 The Nomura economists see an MLF cut as one of the most efficient ways for Beijing to achieve its goal of lowering real interest rates. Photo: VCG

China’s cabinet, the State Council, has signaled that the authorities will ease monetary policy with both broad and targeted cuts to the reserve requirement ratio (RRR) for banks.

Beijing is likely to make the cuts in a timely manner to support the real economy, particularly small enterprises, according to an official statement (link in Chinese) released late Wednesday after a meeting attended by Premier Li Keqiang.

The State Council’s statement indicates that China’s government aims to keep the economy on an even keel by ensuring there is ample credit available in the financial system amid economic headwinds that include slowing growth and a trade war with the U.S.

The timing of any cuts remains in question as the statement only said it would take place “in a timely manner.” “The exact timing for RRR cuts is still uncertain,” economists at Nomura International (Hong Kong) Ltd. said in a note on Thursday.

The Nomura economists expect a cut of 50 basis point in September to “bolster market sentiment” before the National Day holiday, which starts Oct. 1, followed by another 50 basis point cut in the fourth quarter, according to the note.

Since last year, China’s central bank has made five targeted and across-the-board RRR cuts to support the economy. In addition, it cut the RRR for some small and midsize rural commercial banks in May.

The Finance Ministry has started an early assessment of how much debt local governments will need to sell next year, around three months earlier than usual, according to several local governments’ public filings. An early move to assign quotas for the issuance of special-purpose bonds next year aims to ensure funds are put into use and generate results in early 2020, underlining the government’s urgent need to increase infrastructure investment.

Special-purpose bonds are designated for public works projects including infrastructure and are meant to be repaid from income generated by those projects, rather than from local budgets.

The potential RRR cuts can allow banks to use the money released by the cuts to purchase these bonds, said Li Qilin, chief economist at Lianxun Securities Co. Ltd. At a Saturday meeting (link in Chinese), the State Council’s Financial Stability and Development Committee said that China should improve coordination of monetary and fiscal policies.

The Nomura economists predicted that local governments’ finances will worsen over the next few months as real estate developers slash land purchases, a major source of local government revenue.

Along with the possibilities of cutting the RRR and allowing local governments to issue bonds earlier than usual, the State Council also mentioned accelerating the implementation of measures to cut real interest rates. Citic Securities Co. Ltd. analyst Ming Ming said in a note that the reduction of real interest rates needs to be done by lowering China’s recently revamped reference lending rates, the national loan prime rates (LPRs).

Although a near-term RRR cut would more or less reduce the potential for a near-term cut to the central bank’s medium-term lending facility (MLF) rates, the Nomura economists still “expect a moderate MLF rate cut” in around two weeks, they said.

The MLF, or medium-term lending facility, is a kind of policy lending tool that the central bank uses to manage liquidity in the financial system, and is used as a reference for setting the LPRs.

The Nomura economists see an MLF cut as one of the most efficient ways for Beijing to achieve its goal of lowering real interest rates.

China’s stock markets gained on Thursday, buoyed by the possibility of the RRR and MLF cuts, as well as an earlier announcement of another round of trade talks between China and the U.S. The benchmark Shanghai Composite Index rose 0.96%, and the Shenzhen Component Index increased 0.86%.