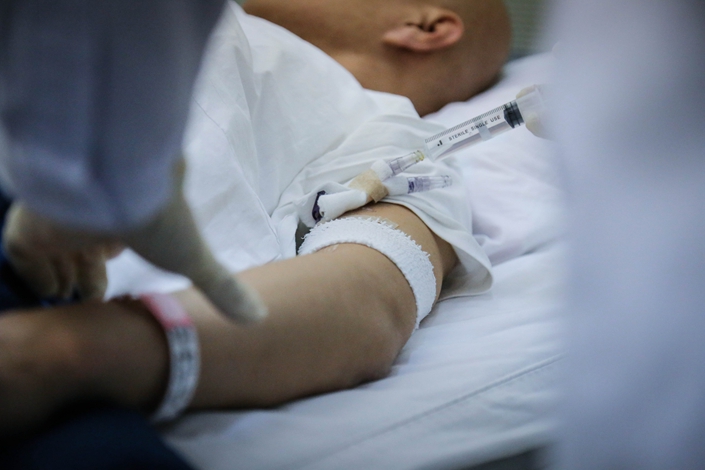 Around 131,000 new cases of HIV were diagnosed in China between January and October this year, according to a progress report published Saturday on the website of the country’s main disease control and prevention body.

The report (link in Chinese), which was timed for release ahead of World AIDS Day on Sunday, did not break down the figures in exhaustive detail, but added that around 958,000 people in China lived with HIV, the virus that causes AIDS, as of Oct. 31, compared with 861,042 people at the end of 2018. The country has recorded rising numbers of new HIV cases every year since at least 2011.

China has ramped up HIV/AIDS testing, diagnosis and treatment in recent years to combat the spread of the virus. The country conducted some 230 million individual HIV tests in the first 10 months of this year and most people with the disease are now undergoing treatment, according to the report.

The data shine a light on the changing causes of HIV in China. While it was once fairly common for the disease to spread through needle-sharing or pass from mother to child during pregnancy, it is now predominantly a sexually transmitted disease. Of the new cases recorded from January through October, 73.7% were spread via heterosexual sex and 23% via sex between men, according to the report.

Those changes mark a sharp contrast with the AIDS crisis of the 1980s and ’90s, when illegal blood-donation stations proliferated across parts of the Chinese countryside and encouraged people to sell their blood for cash. A negligent approach to hygiene and sterilization led to an epidemic that ripped through rural areas and ravaged communities.

But while China has successfully staunched the spread of the virus among those groups, other demographics are proving harder to reach. One of those is men above the age of 60, who last year accounted for 16.5% of all HIV cases, up from 7.4% in 2010, according to China’s disease control and prevention body. The new report did not specify how many new cases this year were drawn from this age group.

Ama Sande, UNAIDS country director and representative to China, said the organization was increasingly concerned about the country’s growing number of HIV-positive senior citizens, for whom late diagnosis can be a major problem.

“These figures suggest that further intensification of age-appropriate HIV/AIDS prevention and treatment services is needed,” Sande told Caixin Global in a written statement. “The fact that they are being identified in higher numbers is a good indicator of HIV testing services reaching them, but we need to focus on whether awareness and prevention services are reaching them effectively and how these services can reach them earlier.”

Sun Zhipeng, a Ph.D. researcher at Utrecht University in the Netherlands who specializes in HIV/AIDS control among Chinese men, told Caixin Global in a written interview that the disease’s growing prevalence among senior-age men in China underlines the lack of research into the sexual behavior of the country’s older people.

“To a greater or letter extent, elderly people and their sexuality have always been ‘ignored’ in AIDS research and social studies of sex,” he said. “So, there are two main things we need to discuss more. First, the report does not clarify whether these older men are becoming infected with the AIDS virus through sexual contact with members of the opposite sex or members of the same sex. And second, we can’t just pay attention to men at their so-called sexual peak; we must consider the sexual and emotional needs of older men as well.”

As part of global efforts to end the AIDS epidemic by 2030, China aims to meet UNAIDS’ “90-90-90” goal, which aims to ensure by 2020 that 90% of people with HIV know their HIV status, 90% of those diagnosed with HIV receive antiretroviral therapy, and 90% of those receiving antiretroviral therapy have viral suppression, meaning their blood-borne HIV levels have fallen below detectable levels. In October, the government announced a wide-ranging plan for HIV control (link in Chinese) between 2019 and 2022 that seemed to reference the 90-90-90 goals.

Despite policy-based advances in HIV/AIDS control, those living with the condition in China continue to suffer stigma and discrimination. Deep-seated social taboos against the disease cause many to conceal their conditions from their spouses and families, or refuse to seek medical treatment. In addition, the country’s sexual-health education remains partial and patchy, complicating efforts to raise awareness of the disease.

But there are signs that the country is becoming more tolerant of people with the condition. “Generally, discrimination is better than it used to be,” said Bu Jiaqing, general secretary of the AIDS-awareness group Shanghai Qing’ai Health Promotion Center. “These days, it mainly stems from inadequate knowledge about disease control, so we recommend that the relevant government departments increase efforts to spread awareness and coverage.”

Nearly one-quarter of all new HIV cases recorded between January and October concerned men who have sex with men (MSM), one of the fastest-growing groups of people vulnerable to contracting the virus. Policymakers have backed interventionist approaches to tackling HIV in the MSM community, a move that some experts say unfairly targets gay men in general. “They only intervene in their sexual behavior, but don’t go out and understand … their social positions and roles, their life circumstances, or the challenges to their wellbeing that they face in contemporary China,” Sun told Caixin Global.