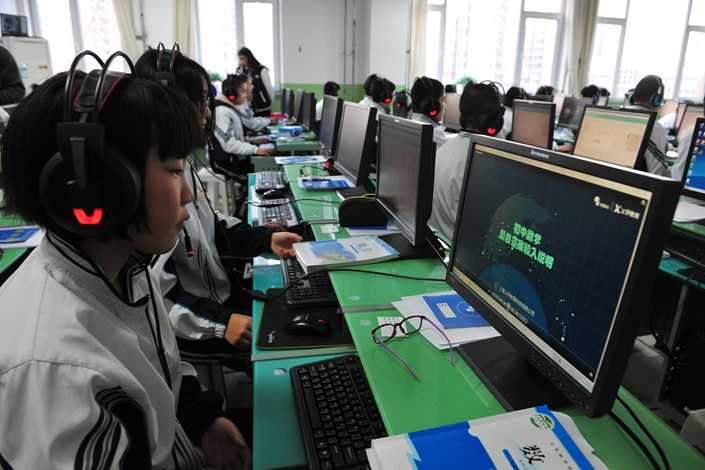 Critics also voiced suspicion about why Guangdong was switched with Zhejiang for the most recent test. Photo: VCG

Teenagers on the Chinese mainland took top marks in a recent global education study, but experts have slammed the results as unrepresentative and opaque as they only included students in some of the country’s wealthiest regions.

The country’s 15-year-olds scored higher than their peers in any other nation in each of the three core subjects covered by the influential 2018 Program International Student Assessment (PISA), the results of which were announced Tuesday. The test, which is considered a bellwether of global education systems, is held every three years under the auspices of the Organisation for Economic Cooperation and Development (OECD), a forum of the world’s richest economies.

With mean scores of 555 for reading, 591 for math, and 590 for science, Chinese students received the highest ranking, level 4, in all three categories. By contrast, students from the United States attained level 3 for reading and science, and level 2 for math. British schoolkids ranked level 3 in all categories.

The scores marked something of a return to form for China, which slipped to an ignominious 10th place in the 2015 assessment after exemplary performances in 2009 and 2012. But the publication of the results was swiftly followed by familiar criticisms from education experts, many of whom say we should take China’s chart-topping status with a hefty pinch of salt.

To start with, test-takers on the Chinese mainland don’t accurately reflect the quality of the country’s education system as a whole, critics say. Although test organizers require each member country and economy to select at least 5,000 students from at least 150 schools drawn from various regional and social demographics, China is a notable exception to this rule. The 12,000 or so Chinese students who took the most recent PISA were based in the two wealthy megacities of Beijing and Shanghai, as well as the developed eastern provinces of Jiangsu and Zhejiang.

That matters because the quality of education in China varies widely from region to region, with schools in the country’s prosperous eastern cities generally far outshining their counterparts in poorer rural and inland areas. Students in those areas did not take the PISA.

Similar criticisms have been leveled at China before. In 2012, the country’s PISA results were lambasted for only including students in Shanghai — specifically, those registered as formal residents in the city, to the exclusion of migrant children who often come from less affluent backgrounds. Critics said at the time that the participating students could not possibly represent the country as a whole.

The 2015 survey, which included Shanghai, Beijing, Jiangsu, and the southern province of Guangdong, was similarly slammed as incomplete. Critics also voiced suspicion about why Guangdong was switched with Zhejiang for the most recent test.

In addition, China’s chart-topping PISA results have attracted questions about student welfare. Compared to other OECD countries, students in China spend a lot of time in the classroom: an average of 31.8 hours per week, to be exact. While that figure is already the 4th-highest of any participating country, it only includes formal teaching time, not extracurricular study.

A previous PISA study found that in 2015, students in Beijing, Shanghai, Guangdong, and the Jiangsu city of Suzhou spent a total of 57 hours per week studying, a figure that seems unlikely to have changed significantly in the four years since. Much of that time was spent learning PISA-related subjects, squeezing “softer” pursuits like art, sports, music, and social science off the curriculum.

Other experts question the validity of standardized tests like PISA in the first place. “Ultimately, the most recent results need to be analyzed through the prism of China’s relationship with the world and how it wants to be perceived,” Julian Fisher, senior partner at the Beijing-based education consultancy Venture Education, told Caixin in a written interview. “China could easily test people from every province, but it doesn’t. Why? Is this a mechanism to accurately assess China’s abilities within the — very narrow — parameters of the PISA rankings, or an opportunity to show China’s growing strength?”