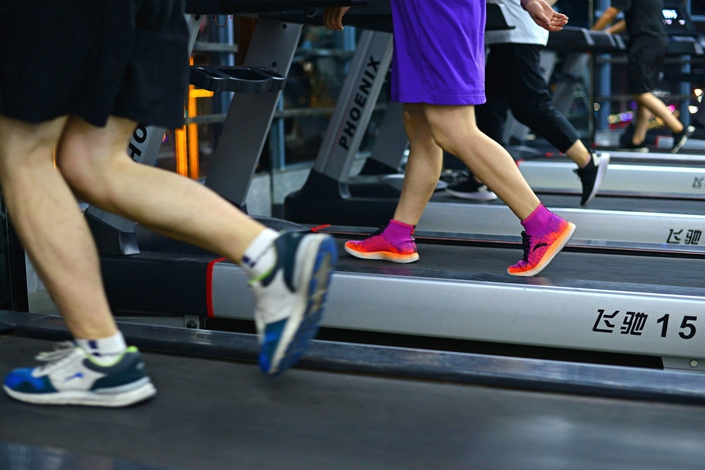 A salesperson for one gym in Shanghai said he could offer a “lifetime plan” for more than 105,000 yuan. Photo: VCG

From language schools to local shoe repair shops and restaurants, prepaid package deals are everywhere in China. But so too is the phenomenon of startups going up in smoke — and dodgy operators disappearing into the night with the money people have already paid for their services.

Many small businesses require customers to front an eye-watering payment: a deposit, membership or course fee often running to thousands of yuan of more. This might unlock discounts, but is often required just to access basic services.

Now, after the high profile collapse of a string of money-burning start-ups, Beijing’s city authorities are planning a clampdown on this “prepaid consumption.” They took it public in November when seven local government departments released draft guidelines on regulating prepaid services in their jurisdictions.

The draft guidelines, designed to protect consumers by limiting how much they can front to language training centers, gyms and other membership-offering services, have sparked a debate on whether some go too far, threatening businesses which are already struggling with structural changes.

Among a suite of proposals: private education providers would be banned from soliciting prepayments greater than 10,000 yuan ($1,423), bike-share deposits could not exceed 100 yuan, and gym membership contracts would come with a seven day cooling-off period. There would be a reserve system for deposits to help stop them from being misused or invested in speculative assets like real estate or stocks, as well as centralized controls, blacklists and a unified complaints platform.

Qiu Baochang of the Consumer Association of China, a watchdog group affiliated with China’s State Council, told Caixin prepaid consumption was good for consumers because it offered discounts, and helped companies by reducing their operating costs. But Qiu said repeated instances where operators have absconded with cash need to be addressed.

Now you see it

After a trial class, one staff member gave her the hard sell. The cheapest option was 30 classes for about 3,600 yuan, but she was in luck, he said: a sales promotion meant she could get a year-long membership for just 20,000 yuan. She might even be able to take free classes on the weekends, he continued, adding: “We are friends — we are a community.”

Fan walked away without making a purchase. Within weeks, GuCycle shut all six of its branches and its operators vanished, leaving a trail of angry customers demanding their money back.

Some of the proposed rules have raised eyebrows. One, dubbed the “three-month rule,” would ban fitness centers from selling memberships that last longer than three months or cost more than 3,000 yuan.

Caixin reporters called several fitness centers in Beijing and found few had membership options that short. Gym administrators, who may or may not have been speaking honestly, told Caixin the most popular packages were annual memberships, followed by half-year memberships. Some fear that given the capital intensive nature of the industry, the membership restriction could be a death knell.

It would follow an explosion in recent years of boutique personal training and special group class studios, which has disrupted the industry as real estate, rent and labor costs have all shot up. Some of these have succeeded while many have flopped — with consumers losing their money in the process.

Zhao Jiu, a researcher at the Intellectual Property Center of China University of Political Science and Law, said the draft papers represented the first time a three-month rule had been discussed publicly. He questioned how it would be implemented, given that much of the fitness industry is made up of small to midsize enterprises.

Jye Chong, the founder and CEO of midsize 24-hour fitness chain B Active, said the three-month membership restriction was a “quick fix” that would hurt long-term competition and innovation.

“The market will change with consumer demand. Beijing already has many gyms that offer flexible terms.”

While the industry might benefit from better regulation, he said, the limit would stunt its growth — and could even cause some gyms to close.

Chong said that while his gyms do have short-term memberships, the problem is not long contracts but lax consumer protection laws to deal with businesses that go bankrupt.

Chong, who founded B Active in 2013 as one of China’s first 24-hour gyms, said the initial investment required to open a fitness center was higher than most retail businesses. Many relied on long-term memberships to pay for expensive new equipment and renovations, and “compete with inexperienced and unsustainable new players.”

But he said many fitness operators do take advantage of China’s “immature market,” offering things like lifetime memberships that they have no way of backing up.

Caixin found one Beijing fitness center that was willing to offer a 10-year membership for around 30,000 yuan, while a salesperson for one in Shanghai said he could offer a “lifetime plan” for more than 105,000 yuan.