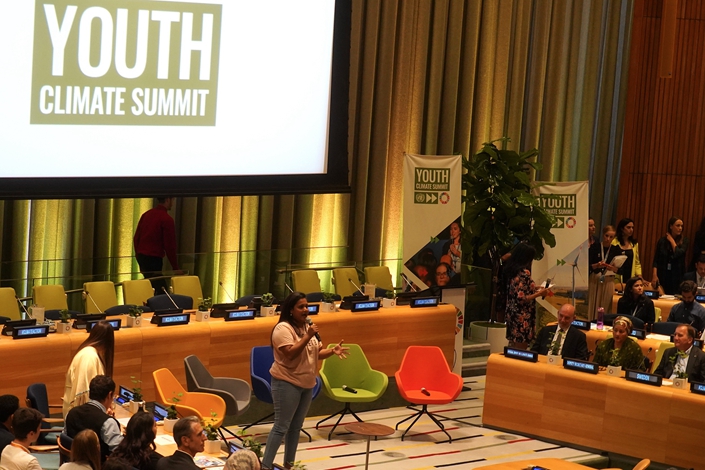 The United Nations is facing a particular challenge — the very dangerous contradiction between a growing number of threats that can only be resolved through global cooperation and a retreat from the methodology of international cooperation.

These threats include issues like climate change, growing global inequality, demographic changes that increase migration, and issues relating to technology and technological disruption. They are all megatrends that can only be dealt with effectively by international cooperation. No country, however large or mighty, can deal with them alone.

At the same time, we’re seeing a growing trend toward unilateralism — or only working with other countries that have a similar mindset. The situation has caused a great deal of concern for the welfare of the planet and its people. So U.N. Secretary-General António Guterres wants to use the occasion of the 75th anniversary of the United Nations next year to reconnect with the people. The first three words of the U.N. charter are “We the people.” That means the international community needs to hear their views, their hopes and their fears for the world. How do they see the role of international cooperation in working to better deliver on their hopes and contain their fears?

We’re seeing popular unrest in many different parts of the world. We have to examine each situation individually. Each has its own history and its own dynamic. But at the same time, I think one can identify some common elements, especially among younger people. And we want youth voices to be at the center of the debate. At the center of the debate is a sense of great uncertainty about what’s coming next. In many parts of the world, there’s a sense among the youth of being disconnected from traditional institutions, not feeling adequately represented or adequately heard by traditional institutions. They have a lot of concern and many fears about the future, and a lot of distrust toward how traditional parties and traditional systems are dealing with threats to the future.

These fears are often fueled by uncertainty regarding new technologies: Will artificial intelligence (AI) lead to more jobs or fewer jobs? In many countries, youth unemployment is at a record high. How will new technologies affect our privacy? Will new technologies make us more secure or less secure? There are a lot of questions around new technology and what benefits it can bring.

Growing inequality is also a factor. Because of digital technology, people are more aware of how others live. But that also makes them more aware of enormous gaps. There are growing gaps between rich and poor. Over the past 10 years, global wealth has increased by 80%. That’s an enormous figure, but that 80% increase due to globalization has not been evenly distributed. The number of billionaires globally over the past 10 years has gone up three or five times, whereas the poorest around the world have seen very little change in their circumstances. Just 26 people, the number of people who could fit in this room, comfortably own the equivalent of what 50% of humanity owns. Last year, it was 43. Now it’s 26. Inequality is fueling that sense of unease. Climate change is another factor that’s fueling unease.

These are issues that we have to do a better job coming to grips with. The place to start is listening to the concerns of the people, especially the youth. And that is very much what we want to do for U.N.’s 75th anniversary. Listening is just the first step. The next step is to act on their concerns. Many of these concerns are issues that have to be tackled globally.

Fabrizio Hochschild is assistant secretary-general for strategic coordination and special adviser on preparations for the Commemoration of the United Nations’ 75th Anniversary. This article has been adapted from Hochschild’s interview with a group of Chinese media outlets, including Caixin Global, on Wednesday at the U.N.’s office in Beijing.