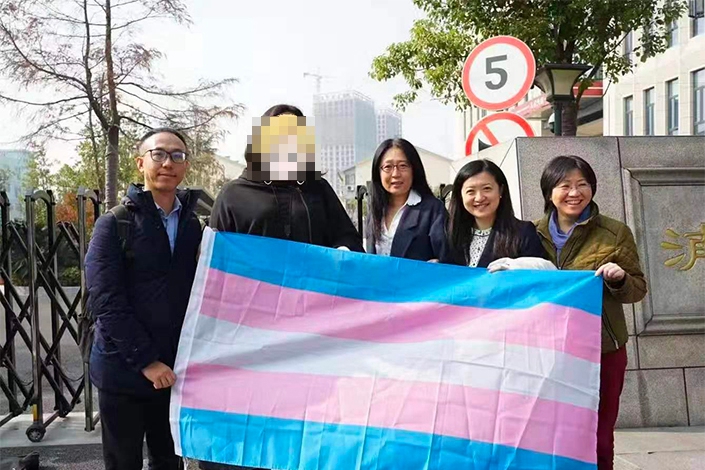 Ma, second to left, attends a hearing with her lawyers at a local court in the eastern Chinese city of Hangzhou. Photo: Ma

A woman in the eastern Chinese city of Hangzhou, known by the pseudonym Ma, is suing her former employer, who she says fired her because she underwent gender reassignment surgery.

Ma, 31, is the first transgender person to take an employer to court for alleged job discrimination since the country’s top court ruled (link in Chinese) in December 2018 that people could sue over violations of equal employment rights.

The first formal hearing in the case, which Ma filed in August, was held at a local court in Hangzhou on Tuesday. She is seeking an apology, 10,000 yuan ($1,420) in compensation and all court fees.

However this is not the first time a transgender person has turned to the courts over employment discrimination. In 2017, a court in Guiyang, Guizhou province, awarded a trans man compensation for unfair dismissal, though it did not rule on whether he had been discriminated against based on his gender identity.

In a phone interview with Caixin Global on Saturday, Ma claimed that in October 2018 she was given unpaid leave from her job as an assistant at the Hangzhou-based Ciyuan Culture — which operates an online platform for cosplay, the hobby of dressing as characters from works of fiction — to undergo gender reassignment surgery in Thailand.

She said that on returning, the company said she should resign as her “health condition” made her “unsuitable” for her job. The company also told her that she was not suitable to work with either male or female cosplay artists, according to Ma. The company fired her in February, citing “serious violations” of its attendance rules.

A local government labor arbitration panel, which did not look at the gender aspect of Ma’s case, in June ordered the company to compensate Ma with a sum equal to two and half times her monthly salary as an assistant for unfair dismissal. After winning this case, Ma decided to take the case to court to get a ruling on the alleged gender discrimination aspect.

Xiang Zhenhua, Ciyuan Culture’s legal advisor, told Caixin Global on Friday over the phone that Ma had a poor work ethic and was often late to work.

Ma said that the firm did not properly warn her about the attendance issue immediately prior to dismissing her, only issuing attendance warnings six months earlier. She said her gender identity was the real reason for her dismissal.

“I was shocked when the company’s HR (human resources) manager talked to me about my health,” Ma told Caixin Global over phone, adding that the company used to be friendly to members of the LGBT community. “They just assumed that my body couldn’t support the workload,” she said.

Xiang Zhenhua also said that the company has laid off several members of staff over the past year due to operating conditions, and he said the company has an inclusive culture and has multiple trans cosplay artists.

Ma’s lawyer Wang Yongmei told Caixin Global that the company couldn’t prove that it had fired other employees at the same time. The company claims to have an inclusive culture, but it doesn’t mean that it was aware of the effects of gender reassignment surgery, Wang said.

Xiang argued that the public has misinterpreted a regular employment tribunal as a case of gender-based discrimination. “Putting that label on this case is actually the biggest injustice here,” he said, adding that the only flaw in the dismissal process lies in poor communication between company management and Ma.

Transgender people in China still face a harsh employment environment in general. Many struggle to land a job, and rates of self-employment are high, according to a 2017 nationwide survey on China’s transgender population conducted by the Beijing LGBT Center and Peking University’s department of sociology.

“Through the case (of Ma), we hope to encourage more people from the community to speak out,” said Feng Zhuofan, executive director of Voice of Trans, a nonprofit organization dedicated to promoting transgender rights.

“Some transgender people are hesitant to expose their transgender identities after completing sex reassignment surgery and would like to live their life as a cisgender person,” Feng said. Cisgender is a term for people whose gender identity matches the sex they were assigned at birth.

Shishi, a transgender woman living in Beijing, told Caixin Global she has struggled to land a full-time job. She hasn’t entered full-time work since obtaining a bachelor’s degree in July 2016, and has been freelancing on and off for nonprofit organizations. “One employer even asked me why I have long hair as a man,” she said.

In terms of legal recognition, there’s no shortage of laws that prohibit discrimination on the basis of gender in China. However, when it comes to extending protections to trans people, these provisions are at best unevenly applied, a report published in 2018 by the United Nations Development Programme (UNDP) and China Women’s University shows.

The UNDP report suggested that due to this inconsistency, many trans individuals — particularly women — face difficulty in securing employment and enter sex work, where they may face humiliation and legal punishments.