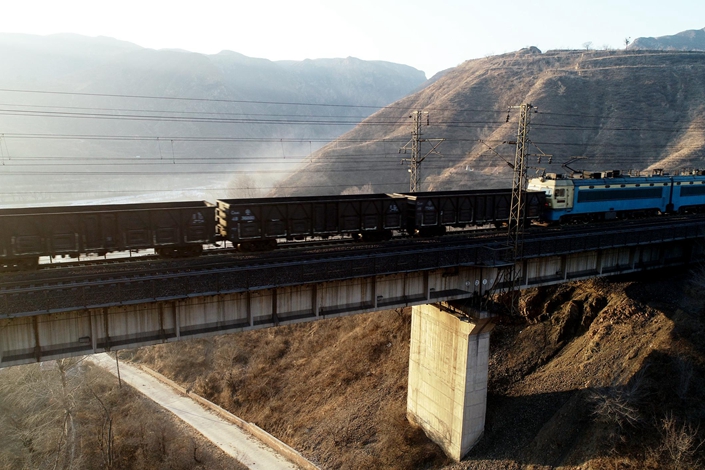 The Daqin line is not the only railway facing withering freight volumes. Photo: China News Service

The Daqin line, China’s busiest coal freight railway, saw shipments plunge by 7.95% year-on-year to 35.41 million tons in November amid weakening domestic demand for coal, according to a Tuesday report by its operator Daqin Railway Co. Ltd.

Starting in Datong, Shanxi province, the Daqin line snakes through four provinces and municipalities before ending in Qinhuangdao, Hebei province, with shipments from coal-rich Shanxi, Shaanxi and Inner Mongolia for energy-hungry northeast China. Last year, it delivered 451 million tons, accounting for 14.14% of China’s overall rail shipments of the combustible rock. This year its operator believes it could bring as many as 30 million tons less.

Total shipments for the first 11 months of this year slumped by 4.15% from the same period last year to 376 million tons. Daqin Railway sources told Caixin they believe a contraction in domestic coal demand has squeezed the line’s freight volume.

Higher coal prices at the line’s terminal may also have weighed on operations, according to vice president of China Coal Transportation and Distribution Association Li Xuegang. In Qinhuangdao, thermal coal was sold for 555.81 yuan ($78.97) per ton in November while prices further up the line in Beijing and Tianjin were just 552.67 yuan.

The Daqin line is not the only railway facing withering freight volumes. The new 193 billion yuan Haoji Railway, which runs from Kholbolji in the Inner Mongolia autonomous region to Ji'an in Jiangxi province, transported just 35,000 tons of coal daily in the first month of operation after it launched on Sept. 28. Its operator China State Railway Group Co. Ltd. expected the daily volume to rise 3.7 times to 164,000 tons in 2020 and had predicted total shipments of 60 million tons for the year, but the railway’s shipping agent, China Railway Xi’an Group Co. Ltd., walked that back to an annual volume of 18 million tons at a conference in October.

Daqin Railway’s operator predicts its total freight volume for 2019 as a whole will level out at between 420 million to 430 million tons, well below last year’s 451 million.