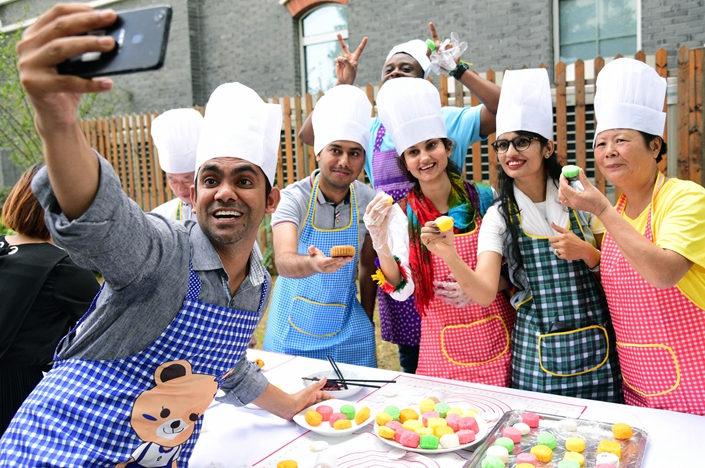 In 2018, China hosted 10% of the world’s 5 million international students, ranking third in the total number of inbound students and only 18,000 students behind the U.K. Photo: China News Service

Traditional top study destinations for international students, such as the United States and the United Kingdom, are starting to seriously lose out amid rising nationalism and tightening visa laws, according to a report by the Qatar Foundation-backed World Innovation Summit for Education, the Institute of International Education (IIE) and the Center for China and Globalization.

While growth of international student enrolments in the U.K. and U.S. has slowed considerably over the last few years, China’s has jumped. In 2018, China hosted 10% of the world’s 5 million international students, ranking third in the total number of inbound students and only 18,000 students behind the U.K.

China has made strides in attracting international students, particularly by offering generous scholarships, as well as through the Belt and Road Initiative, said Paul Turner, director of IIE East Asia. In 2017, nearly half of China’s international students came from the 64 countries involved in the initiative.

In particular, the numbers of students from other Asian countries, Central Asia and Arab states have all more than doubled from 2007 levels. The number of Indian students has grown in recent years thanks to the expansion of medical programs being taught in English and because Chinese medical institutions are now recognized by the Medical Council of India, the report says. The number of African students has also grown thanks to China’s scholarship programs targeting developing countries.

The Belt and Road Initiative has not only attracted high-quality students from Central Asia and sub-Saharan Africa, but is also “building the habit among students there to choose China as their study destination,” Turner said, citing findings from the Global Competition for Talent: A Comparative Analysis of National Strategies for Attracting International Students report.

However, education experts at a roundtable discussion on the report hosted by the Center for China and Globalization in Beijing on Wednesday expressed a need to develop an international standard for determining student quality, for universities around the world to better integrate international students, and for universities in China to do more to attract top global talent. “There is no doubt that China has been chasing a quantitative target,” said Hamish Coates, director of the Higher Education Research Division at Tsinghua University’s Institute of Education in Beijing, referring to China’s target of attracting 500,000 international students by 2020.

“We must care more about the quality (of students); the number isn’t important anymore,” agreed Xiao Lei, the director of the China Education Association for International Exchange’s Office of Overseas Students in China.

Coates suggested that education organizations around the world develop an international standards mechanism to determine the quality of education that students are receiving abroad, regardless of home or host countries. “There is not one piece of data common to universities across the world apart from numbers,” he said, referring to the lack of international standards.

In addition, experts suggested that Chinese universities improve their images abroad, do more to help graduates find jobs to stay in the country after graduation, and take steps to ensure all students have a good experience during their studies.

“China has grown to make the top five destinations for international students, but now the hard work starts,” Turner said.