By Mo Yelin and Shen Xinyue 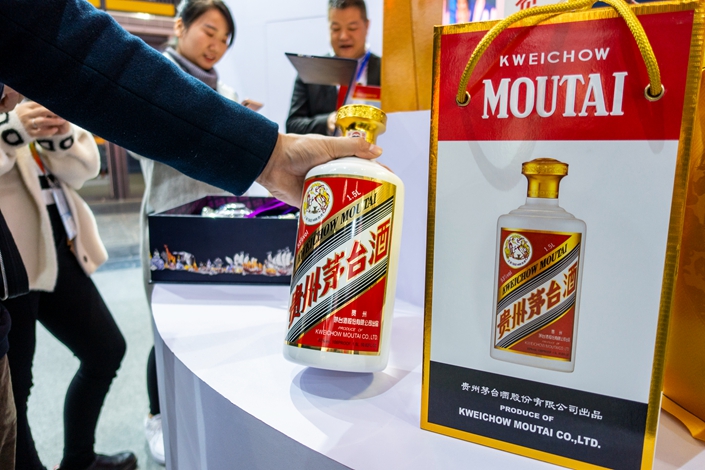 The company set up its e-commerce unit in 2014 and its own online platform the following year, which allowed licensed distributors to sell its products directly to consumers.

Chinese liquor giant Kweichow Moutai Co. Ltd. has announced it is shutting down its e-commerce unit, which had failed to solve the problem of distributors hoarding stock to drive up prices.

Moutai’s board voted unanimously to close the unit, the company said in a statement (link in Chinese) to the Shanghai Stock Exchange on Tuesday. No reason was given for the closure.

The statement said the closure won’t have a significant impact on the company’s business or finances.

The company’s stock edged down 0.17% in Friday trading.

The liquor company has suspended it self-run online sales channels since September, Caixin has learned, though its products were still available from third-party platforms as of the time of publishing.

Known for producing the traditional and popular grain alcohol “baijiu,” Moutai was the world’s most valuable liquor company in 2017. The company set up its e-commerce unit in 2014 and its own online platform the following year, which allowed licensed distributors to sell its products directly to consumers.

The company’s online sales have since grown rapidly. Including third-party platforms such as JD.com, Moutai racked up 4.6 billion yuan ($657 million) in online sales in 2016, nearly one-tenth of its total sales that year.

In 2017, Moutai told all of its distributors that they’d have to sell at least 30% of the products they received through the company’s own e-commerce platform, ensuring Moutai could track their sales. That was increased to 40% last year.

Distributors were also told that deposits they paid to Moutai to secure deliveries could be confiscated should they not reach these targets, according to one distributer based in East China’s Shandong province.

Hoarding had long been a problem for the company, with distributors creating scarcity in the market to increase prices.

But this aggressive move faced pushback from distributors. One based in Beijing told Caixin that many simply ignored the company’s demands.

Moutai has been facing internal challenges that may have made enforcing these rules harder. In March, former e-commerce unit head Nie Yong was detained on suspicion of having accepted bribes from government officials looking to get their hands on lucrative distribution licenses. Nie’s downfall led to a planned expansion of the unit being shelved, the Beijing-based distributor said.

Nie Yong is just one of nine former high-level Moutai executives that have been brought down since May in a corruption crackdown connected with the company. The latest case involved Du Guangyi, a former deputy general manager, who was put under official investigation earlier this month.