Photo Essay: Volleyball Stars in the Making in North China

By Chen Liang and Matthew Walsh 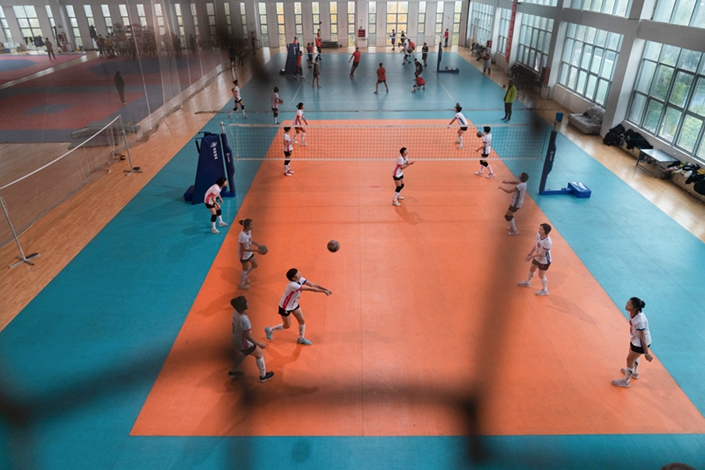 The superstar status of China’s women’s volleyball captain has prompted a spike of interest in the sport in her rural hometown.

Zhu Ting made headlines in September when she led her country to victory in the FIVB Volleyball Women’s World Cup, three years after China’s Olympic triumph in Rio de Janeiro. The 25-year-old, who is the highest-paid professional volleyball player in the world, was also hailed as the World Cup’s most valuable player.

Those accomplishments have sparked pride in the 6-foot-6-inch outside hitter’s home county of Dancheng, in central China’s Henan province. There, more and more girls are showing interest in a sport that carries high prestige in the country, largely thanks to a string of podium-topping performances from the national women’s team during the turbulent 1980s.

Before 2016, “you’d visit lots of places around here and not find any students willing to take up volleyball,” says Xia Luhai, Zhu’s former coach and current secretary of a nearby sports academy in the 9 million-strong city of Zhoukou, which administers neighboring Dancheng County. But Zhu’s Olympic triumph marked a turning point. “Now, of the 41 kids on our team, 15 of them come from Dancheng,” Xia said. “She helped a lot of people understand volleyball.”

The academy periodically sends scouts to other local schools in a drive to recruit young athletes with the potential to emulate Zhu’s success. One newcomer is 11-year-old Dancheng native Zhang Zhengyang, who joined the school as a volleyball student in early December.

Zhang initially caught the eye of the academy’s representatives in the summer, when they noted her prodigious height — she stood a head taller than her classmates — and her strong hand-eye coordination. Although Zhang was keen to join the school immediately, it took another visit before she was able to convince her parents to send her to Zhoukou.

On the sidelines of her first training session, Zhengyang’s father, Zhang Sanlin, reasoned that sports can provide his daughter with a way out of an agricultural county where incomes lag far behind China’s developed urban areas. He says Zhengyang can either become a member of the national volleyball team and bring glory to the nation, or join a provincial team, qualify as an elite athlete, and gain admission to a good university. Failing those, she could join a sports college.

Nonetheless, Zhengyang faces a tough road ahead. Chinese sports schools are notoriously grueling, requiring youngsters to hone their physical abilities without neglecting their studies. Competition for places on the national and provincial teams is notoriously fierce, and one serious injury can obliterate dreams of performing on the world stage.

Sanlin, a retired serviceman, worries that his youngest child lacks experience of hardship. The family has had no land since the government rehoused their village in urban accommodation a few years ago, meaning Zhengyang has never known farm work. And as the baby of the family, she avoids most of the household chores carried out by her parents and sister.

“If you don’t make your kids taste a little bitterness when they’re young, they won’t appreciate the sweetness of life when they grow up,” Sanlin says.

In a bid to ease her into training, Zhengyang’s first day is mainly spent playing games and getting to know her teammates, all of whom are aged between 11 and 15. During a break, the youngster comes bounding over to her father and declares herself “not tired at all.”

“Will you be able to persevere when things get harder?” Sanlin asks her. His daughter nods enthusiastically.