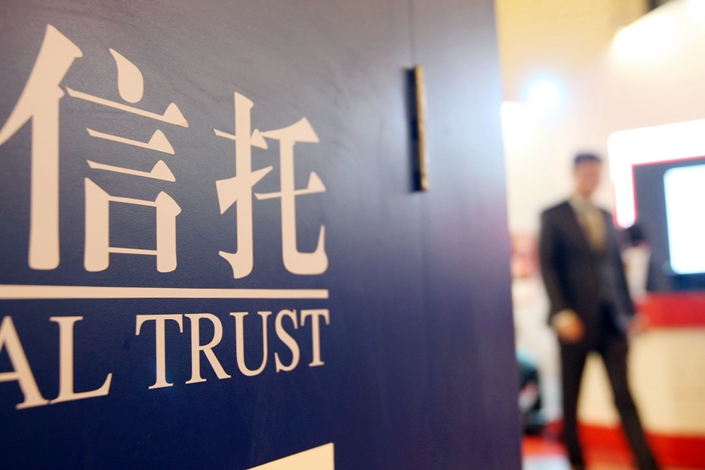 China's banking regulator and central bank have penalized at least 22 of 68 Chinese trust companies this year.

Almost one-third of China’s trust companies were punished by regulators in 2019 for a range of violations, including continuing to conduct illicit shadow banking business and illegal real estate investment.

The China Banking and Insurance Regulatory Commission (CBIRC) and the People’s Bank of China have penalized at least 22 of 68 Chinese trust companies this year, with fines amounting to 22.5 million yuan ($3.2 million), according to Caixin calculations based on public records as of Sunday.

The fines come as part of a continuing crackdown on trust firms’ misconduct, which includes illegally fueling off-balance-sheet lending via the so-called “channeling business,” in which trust companies facilitate lending by third parties without bearing sufficient risk control responsibility. Channeling is a cornerstone of the shadow banking system, which has drawn mounting concern in recent years as rampant growth has fueled rapid build-up of corporate debt and enabled banks to skirt regulation.

In a typical example, a bank collects money from its customers by selling wealth management products and then invests those funds into a trust product, which funnels the capital to borrowers restricted from formal lending, such as unqualified local government financing vehicles and real estate developers. Banks bear the financial risk, while trusts simply channel the money.

At least four trust firms were punished by regulators this year for their engagement in illegal channeling business, records show. Citic Trust Co. Ltd., one of China’s largest trust firms, was fined (link in Chinese) in September by the CBIRC’s Beijing branch for illegally providing channeling services to help banks and insurers circumvent regulations, according to official records.

Some firms were also punished for inappropriate corporate governance, flawed due diligence or violations of information disclosure rules, according to official records.

One trust firm manager told Caixin that the industry cares more about how many times a trust firm has been fined than the actual amount. “Some banks only cooperate with trust firms that have no record of fines,” the manager said.