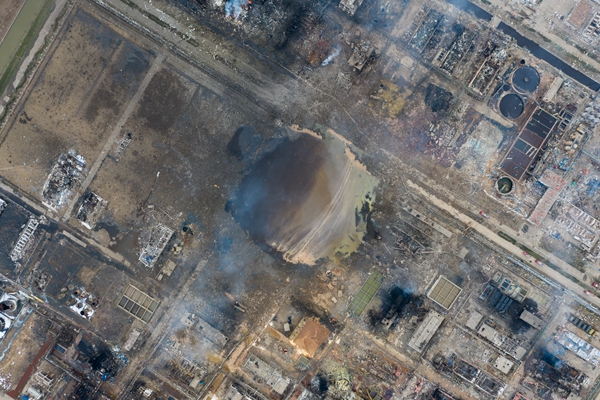 An aerial view of the Chenjiagang Chemical Industry Plant located in the city of Yancheng, East China’s Jiangsu province. On March 21, an explosion at the factory reportedly killed 78 people and injured 617. Published May 20.

China had a turbulent 2019. Internationally, the country’s trade war with the United States dominated headlines, even as the two sides finally committed to a “phase one” trade agreement in December. Meanwhile, at home, the Communist Party successfully navigated a series of significant and politically sensitive anniversaries, culminating in the vast military parade that commemorated the 70th anniversary of the founding of the People’s Republic.

Other events were less rosy. Farmers bewailed the spread of a deadly African swine fever epidemic that by autumn had brought a more than 40% year-on-year fall in China’s pig population. A number of other disasters ravaged the nation, too: Some, like the devastating landfall of Typhoon Lekima in August or September’s dengue fever outbreak, were of natural origin; others, like the gas factory explosion that killed scores of people in the eastern city of Yancheng in March, were decidedly manmade.

China by no means hobbled into the new decade, but it didn’t exactly stride grandly into it, either. As 2020 gets underway, the country is battling a slowing economy, months-long political unrest in Hong Kong, and increased global scrutiny of alleged rights abuses in the country’s far western Xinjiang Uygur autonomous region, claims that the government has consistently denied.

How China grapples with these tumultuous events will likely have a profound impact on both the country and the world. At the dawn of a new decade, Caixin Global looks back on some of the photography that captured the past year.