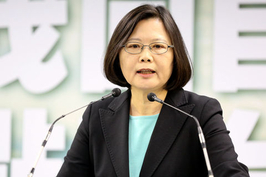 (Bloomberg) – Taiwanese leader Tsai Ing-wen won a landslide victory over China-friendly opposition challenger Han Kuo-yu to clinch a second term in elections Saturday. Her victory, an emphatic public mandate with a record number of votes, is the fourth time since 2000 that her Democratic Progressive Party (DPP) has secured the leadership of the island.

The DPP also held onto its majority in the legislature, albeit with a reduced margin.

In a victory address in Taipei, Tsai said voters had “put democratic values into practice” and that the world should see Taiwan as a partner, not an issue.

She said she hoped the two sides could build a “sustainable and healthy” approach for exchange.

No matter how the situation in Taiwan changes, “There is only one China in the world and Taiwan is part of China,” Chinese Foreign Ministry spokesperson Geng Shuang said in a statement after the vote.

“The Chinese government's position won't change: we stick to the one-China principle and oppose ‘Taiwan independence,’ ‘two Chinas’ and ‘one China, one Taiwan.’

“We hope and believe that the international community will continue to adhere to the one-China principle, and understand and support the Chinese people's just cause of opposing ‘Taiwan independence’ separatist activities and striving to achieve national reunification,” Geng said.