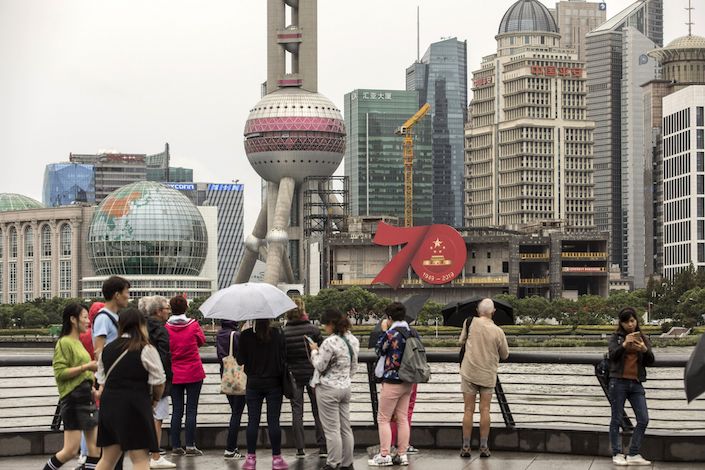 Tourists stand on the bund on a rainy National Day in Shanghai. Photo: Bloomberg

(Bloomberg) — China’s overall credit growth held up in December as a gauge of borrowing costs fell, signaling that policymakers are beginning to make some progress in channeling credit to the economy.

The stock of outstanding aggregate financing expanded by 10.7% in the 12 months to December, the same pace as in November, the People’s Bank of China said Thursday. The previous total financing measure was adjusted to include sovereign and local government debt, the PBOC said. The growth rate refers to an adjusted historical series for the purposes of comparison.

The uptick in money supply at the end of the year, when banks were usually short of credit quota, added to evidence that domestic demand is recovering amid policy easing and a trade thaw with the U.S. The PBOC pledged to keep monetary policy flexible in 2020 and keep credit expansion in line with the growth of nominal gross domestic product.

“Recent data have revealed some stabilization in the economy, and fourth-quarter GDP data due on Friday are expected to show growth holding at 6% year-on-year,” said Bloomberg economists David Qu and Chang Shu in a research note. “External pressures have eased somewhat with a ‘phase one’ trade deal with the U.S. Even so, the economy is still under considerable strain — and this will require further policy support.”

“Interest rates in the open market are largely stable now,” Shu said. The PBOC will “continue to conduct open market operations to ensure market stability ahead of the Spring Festival, as well as providing favorable financial conditions for the real economy.”

Shu also said the average reserve requirement ratio level for all banks is 9.9% after the cut earlier this month. “It’s at an appropriate level,” Shu said. While there’s still room for more cuts if economic growth warrants, that room is “limited,” said Shu.

“We expect further policy easing to be implemented,” though the scale of stimulus would be moderate, Wang Tao, chief China economist at UBS Group AG in Hong Kong, wrote in a note before the data. “More details of policy support measures will be announced in the upcoming National People’s Congress meeting in March.”

The methodological change to the total social financing gauge ― China’s broadest measure of credit growth that includes regular bank loans, shadow banking and now sovereign and local debt ― had little impact on the pace of credit expansion in December.

Including sovereign and local government debt into aggregate financing can “reflect the intensity of both monetary policy and fiscal policy,” said PBOC spokeswoman Ruan Jianhong. The new gauge can “help improve policy-setting and implementation.”

Some economists were skeptical of the change.

“Local bonds and government bonds belong to fiscal policy, and by adding them into the gauge, it actually mixes the fiscal policy together with monetary policy,” said Ding Shuang, chief China and North Asia economist at Standard Chartered Bank Ltd. in Hong Kong. “After taking out the bond element, we found that in general the credit growth in 2019 was faster than 2018, pointing to a more accommodative environment.”